Friday night. Date night. What do you do? It’s the weekend. Group of friends want to hang out, where should you go? More and more Edmontonians are turning to live action escape games as a fun, different, and challenging activity to do for their night (or weekend afternoon) out!

The demand is there – that’s why Escape City just launched. It’s the third and newest live action escape game in Edmonton – located on Calgary Trail and 59 Ave. It’s also the very best I’ve tried so far!

Read on for my review and at the bottom of this post – enter for a chance to win a free Escape City game for up to 6 people! 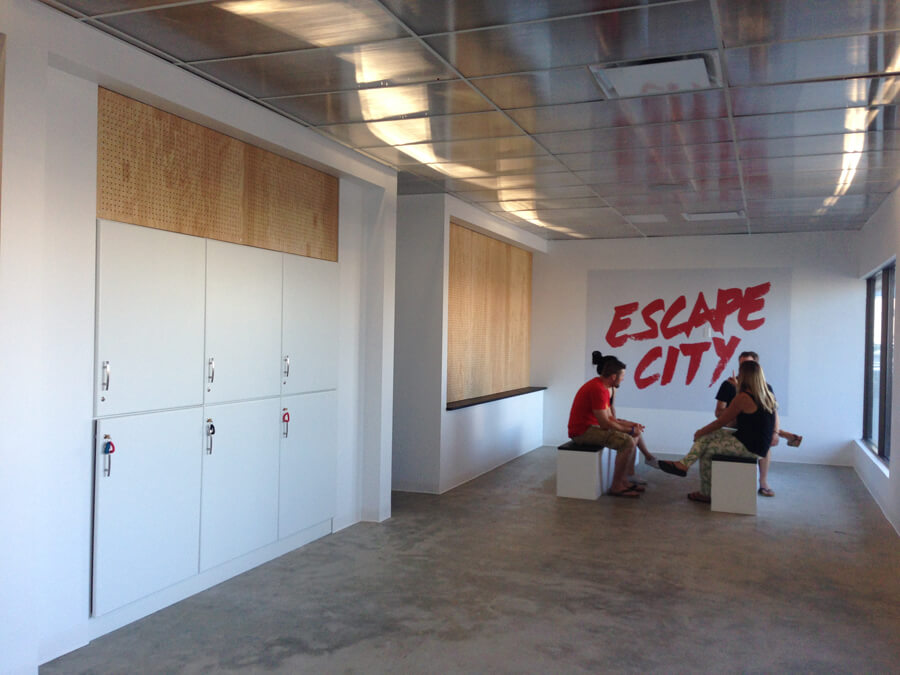 For those new to the escape game genre, it’s basically a game where you and a group of friends are locked in a room and need to solve a series of puzzles/problems in order to successfully escape the room and win the game. Each room has a different theme/storyline you follow. Some rooms are easier to escape than others, most rooms actually have multiple rooms within it that you need to escape from, and puzzles/difficulty level varies depending on the room. The games are very popular in Asia and Europe but are finding success in North America too.

Edmonton’s first live action escape game BreakOut opened in Fall 2014. (Read my original review here). The next one – EEscape – opened just a few months ago in May. (Read my review of that one here).

I think BreakOut and Eescape are both great but Escape City is hands-down the very best experience I (and my group of friends) have had to date. The two rooms I’ve tried so far at Escape City have blown me and my friends away! 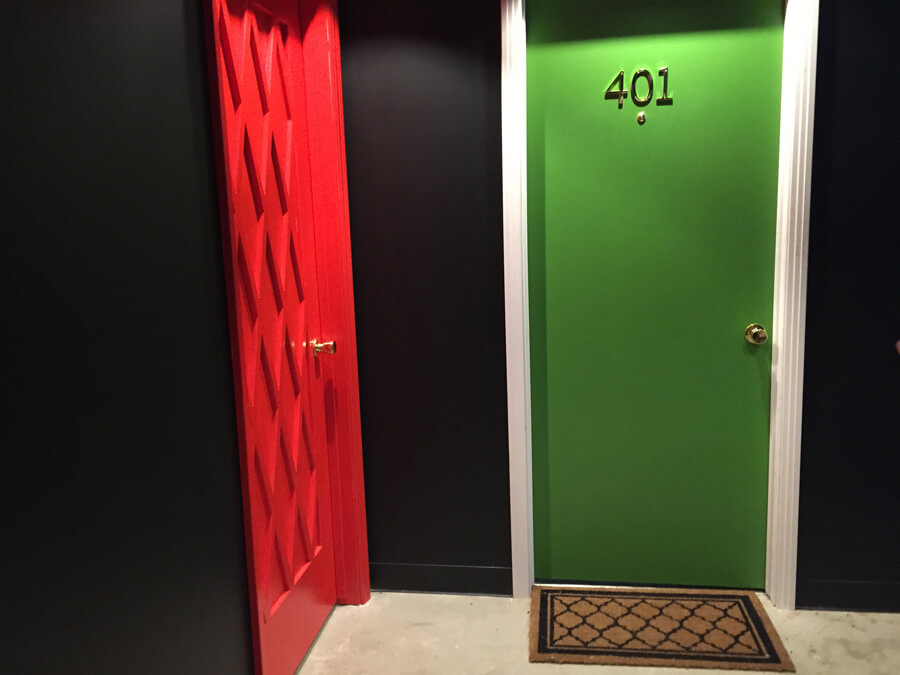 Love the themed doors leading into the rooms at Escape City!

In A Great Discovery, you’re in Owen and Claire’s apartment – but they’re both missing. They said they had very big news, but after they no-showed for the science fair they helped plan, you decide to check in on them at their place. As soon as you open the front door you can tell something isn’t quite right.

In Keller’s Magic Emporium, the great magician Henry Keller is looking for an apprentice for his upcoming world tour. You have been shortlisted. The final portion of the interview process takes place at his magic emporium. Do you have what it takes to make the cut? 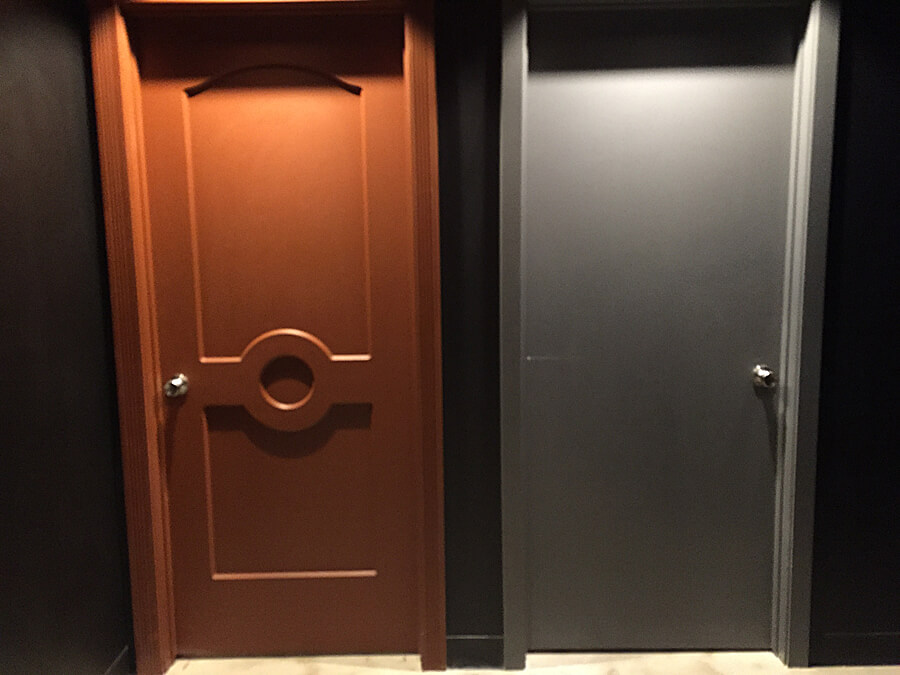 The grey door is a fourth room – just waiting to be built!

There are a few ground rules: don’t move furniture, if things are glued down they’re supposed to be glued down. Don’t step on furniture. There’s nothing in the ceilings. etc. We are pretty sure these rooms started implementing these rules after we started doing them because we have made quite a big mess with furniture, have moved tons of props, and even stood on top of cabinets in order to see if anything was in the ceiling before, LOL.

At Escape City, the puzzles in both rooms are so intricate. There are so many of them. When you think you might be close to solving it all and escaping the room – you’re not. There’s excitement, pressure, whimsy(!!) and fantastic pre-room / pre-game backstory.

Escape City is the first local escape game that has set up pre-game videos that give you background and really set the scene. That pre-room/backstory aspect of escape games really make a difference in the whole experience and Escape City’s done a fantastic job of this. 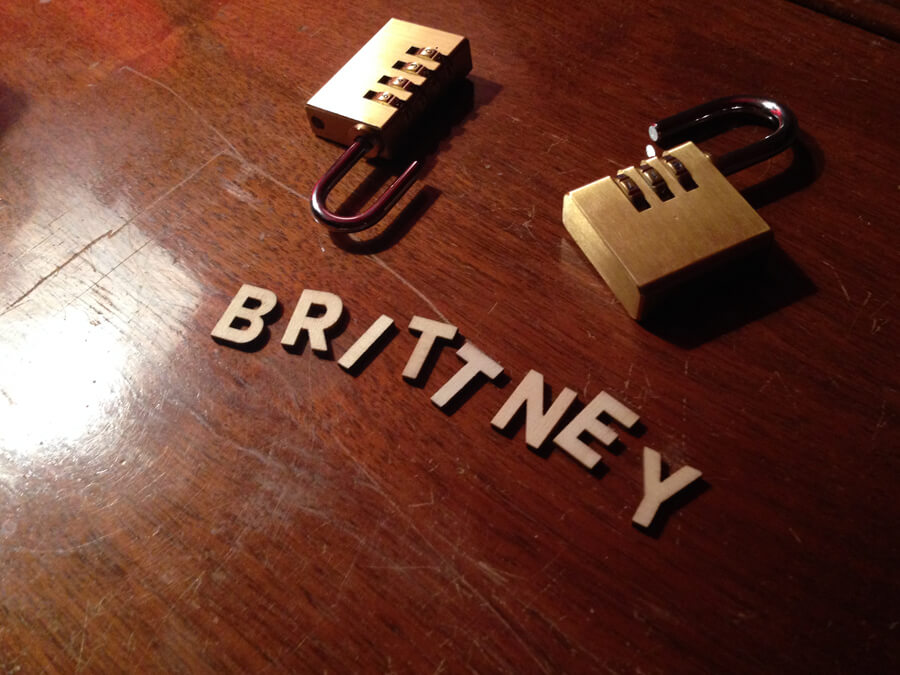 Escape City’s rooms are challenging, fun, and there are some neat twists!

A Great Discovery was very difficult (it’s their hardest one) and Keller’s Magic Emporium is one of their easier rooms. We failed both rooms (LOL) but had so much fun along the way. I found that the puzzles in Escape City’s rooms tried to make use of so many of your senses – you’ve really got to listen to some things, read and interpret some things, smell things, feel things (no tasting things lol – unless you do that in the third room we haven’t tried yet! ha). There are some really neat things incorporated into puzzles – lasers (yes!), music, mirrors, and more.

There were so many moments in Magic Emporium that absolutely delighted the group. Like squeals of delight when we solved a puzzle or were on the midst of solving a puzzle. There is also something of a twist that is so cool! And there was one point where I screamed in terror (Magic Emporium is for 18+ (or you need to have a parental consent waiver) – so really, just a rollercoaster of emotions in this room, lol! We were SO close to solving it!!!

A Great Discovery was much more intense and difficult, and I felt like friendships could have ended in those 45 minutes – lol. Escape games can do this to friendships, lol. 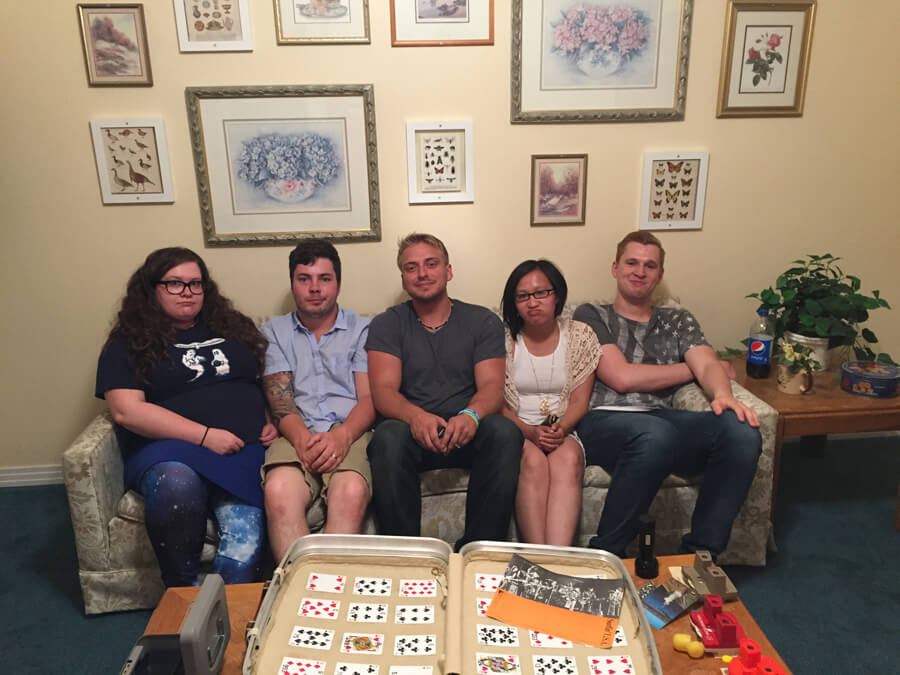 We didn’t solve A Great Discovery. We are sad.

It’s always interesting to see how you work with friends in live action escape rooms. You’ll see how to deal with competitive friends, or if you’re the competitive one, you’ll have to learn how to reign yourself in a little bit or else your whole group will end up hating you, lol. You need to be able to split up duties (at one point in Magic Emporium all of us were crowded around one puzzle – not a great use of time and resources lol). You’ll need to work calmly, decide when it’s best to use up your hints (you get two hints per room if you get stuck). It’s quick (45 minutes) yet totally stimulating (mentally). 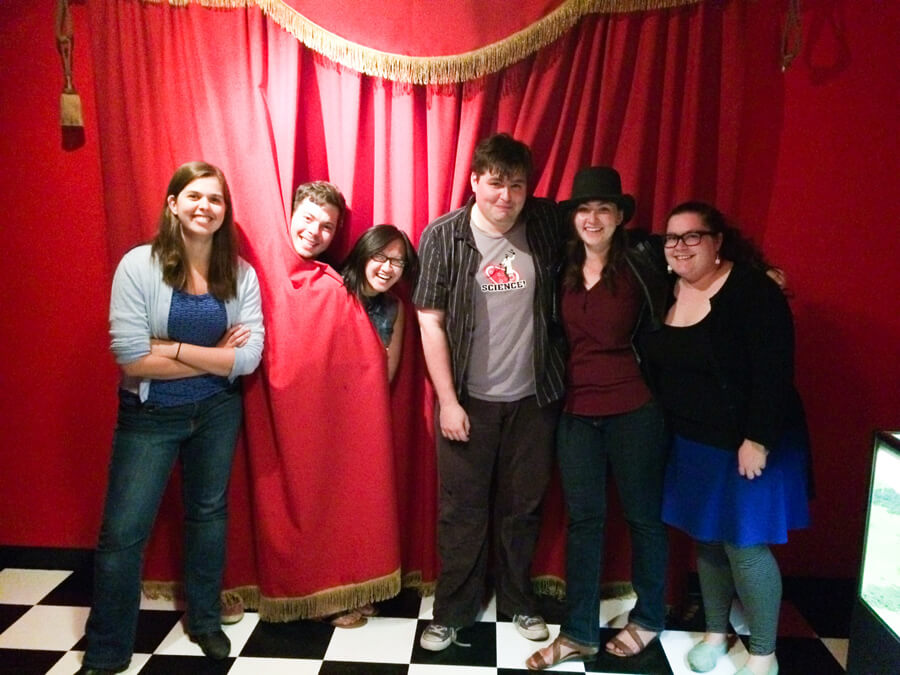 We didn’t solve Magic Emporium – but we got so close!

The four friends who opened Escape City fell in love with the escape rooms here in Edmonton – and went to Vancouver to try all of the escape rooms there – before opening this one. They tell me it’s not a matter of competition with the current escape games here in the city, it’s really just growing the market. 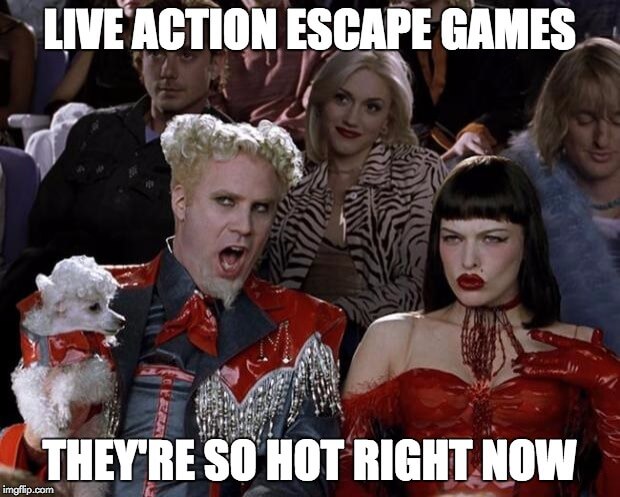 I had to make this meme.

And it is definitely a welcome addition.

The attention to detail put in Escape City’s rooms really show. They really put a lot of effort into the story, set design, and puzzles.

As I said earlier, they’re really the first to have some pretty cool backstory/pre-game information which makes a huge difference in the overall escape experience.

I can’t wait to try Escape City’s third room and a fourth room is opening in a few months. There’s also room in their building for a fifth room too!

But I also can’t wait to return to BreakOut and Eescape. BreakOut’s been around awhile now and have added some new rooms (the Cube is supposed to be amazing!) Eescape has three rooms and have space to add additional ones (they’ve only been up for 3 months so understandable they don’t have additional rooms yet!) I also hear there’s a fourth escape game coming to Edmonton! So there are so many rooms/games/companies in the city now – you can do one every so often, or go hard over one weekend. We have a friend who did all three rooms at Escape City in one night. Mike thinks it would be awesome to do all the rooms in all three of the different companies in one weekend or over several weekends. They also make fantastic team building events. So fun!

Prices across all three companies are $25 per person per game which I think is totally fair (especially given that movies now are practically $20 a person anyway – not including popcorn and drinks!)

Hopefully you can get in to try Escape City for free though – by winning my giveaway! 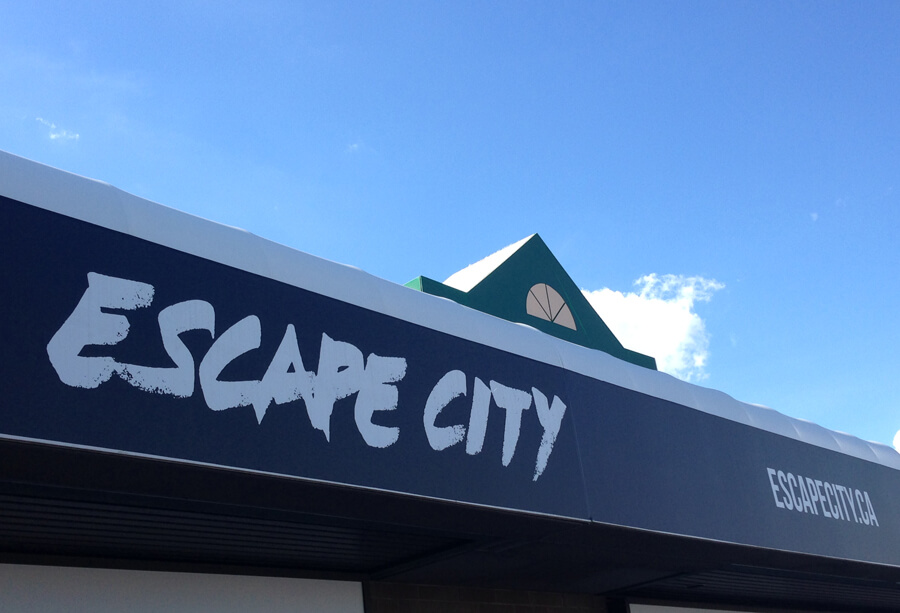 Enter for a chance to win a free game at Escape City!

ENTER TO WIN A FREE GAME AT ESCAPE CITY FOR UP TO 6 PEOPLE!

I’m giving away one free game to Escape City for you + up to 5 of your friends!

Log into Rafflecopter below for different ways to enter. Leaving a comment on this blog post telling me which Escape City room you’d like to try (see the rooms here) is mandatory in order to win!

a Rafflecopter giveaway
This contest closes on Monday, August 24, 2015. I’ll randomly select one winner from all entries.

Note: Comments are moderated so don’t be concerned if your comment doesn’t appear right away!

Good luck! And even if you don’t win – be sure to book your own live action escape at Escape City!

Linda Hoang is a Canadian blogger based in Edmonton, Alberta, who writes about travel, food, lifestyle and pet topics. She's also a seasoned social media/digital strategist with a journalism background, the founder of the Edmonton International Cat Festival and co-founder of Stop Race Based Hate, an online anti-racism education tool. Linda loves exploring the world with her partner Mike, eating their way through cities, supporting local businesses, and photographing Instagrammable Walls. Linda is a fur-mom to two cats and two dogs.
PrevPreviousReview: LETS Grill Restaurant
NextSocial Media Notes (#80) – Links for the Week of August 10 – 16Next