This week Mike and I tried new Chinese restaurant LETS Grill (5926 104 Street) with our friend Nic and his pal Billy.

LETS Grill just opened two months ago on Calgary Trail, in the same strip as Tropika and Syphay – and just a couple of doors down from the newest live action escape game Escape City Edmonton (review and giveaway to that coming next week!) Co-owner Jiahui actually reached out to me and asked if I’d be interested in coming and trying it out. In the couple months they’ve been open, Jiahui and his business partner (and LETS Grill chef) Berton have had fairly unsteady business flowing in and were trying to figure out ways to increase exposure. 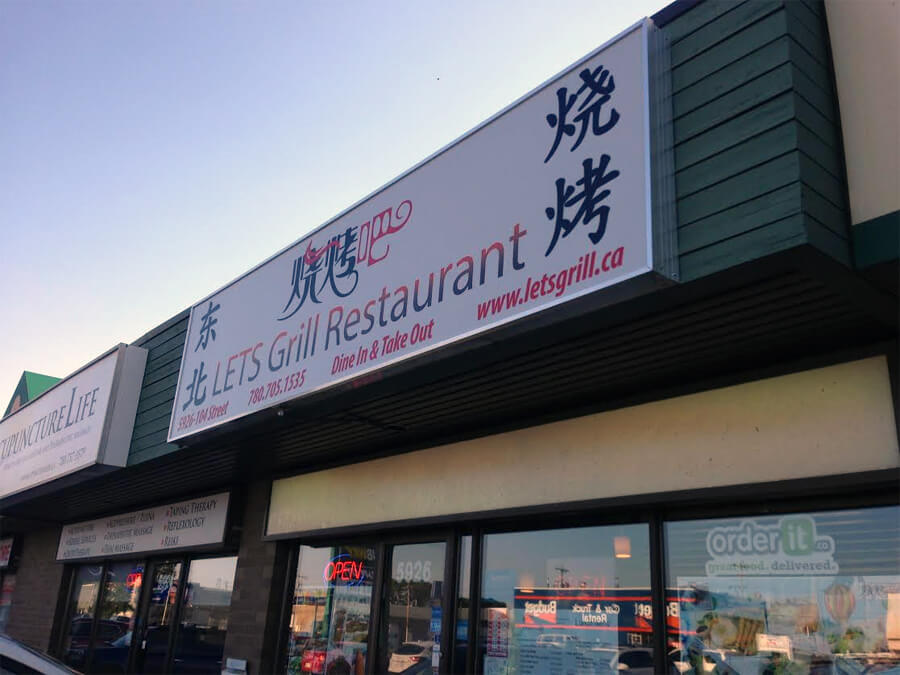 I think their location is actually pretty solid (right on the very busy Calgary Trail), and the food we tried was great! 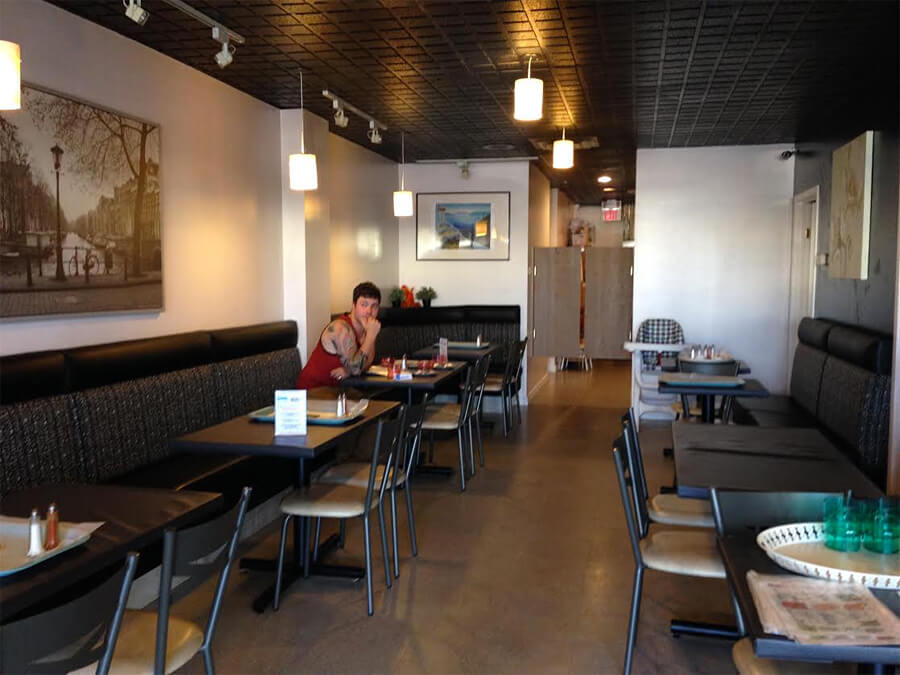 LETS Grill is a clean, small restaurant (it used to be a donair/shawarma shop), with about 32 seats. They specialize in northeast Chinese cooking, which they say isn’t too common in Edmonton. Berton grew up in northeast China and wants to bring his family’s food to Edmonton. The easiest way I’ve been describing the food at LETS Grill is that there’s an emphasis on various meat kebabs – think Chinese tapas (small plates) where you pay small amounts of money per order (kind of dim sum-y in terms of pricing system). 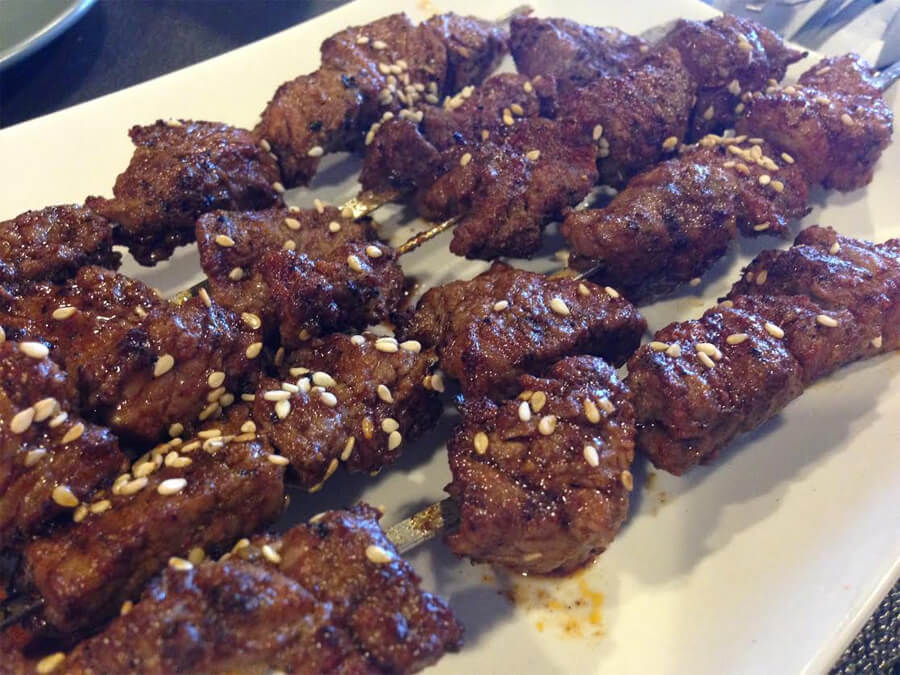 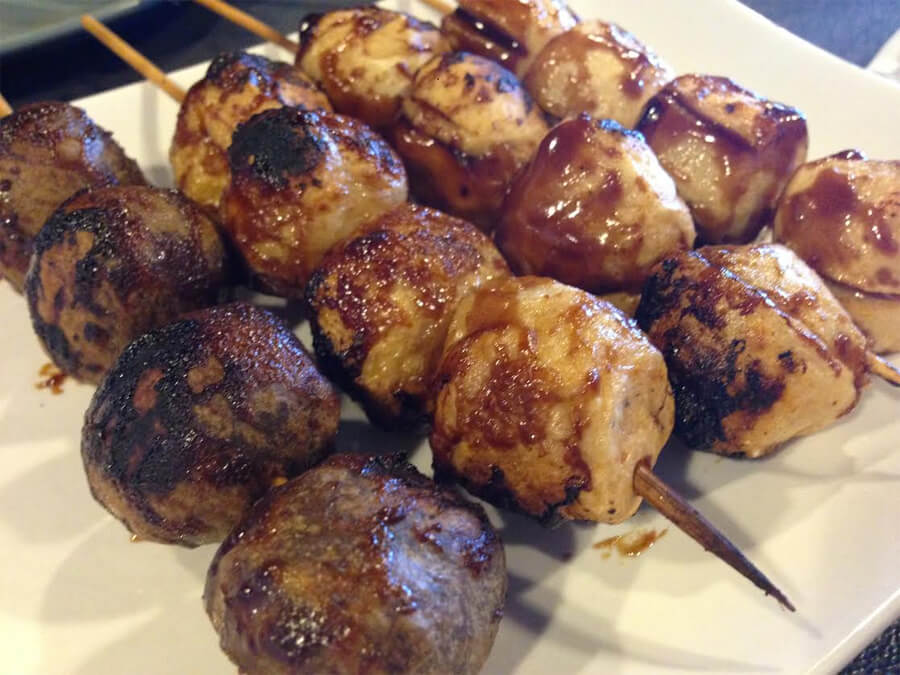 Fish, cuttlefish, and meatballs ($2.50 each) at LETS Grill Restaurant.

We started off the meal with some cold cuts: Sliced pork with smashed garlic ($6, pictured at the top of this blog post), along with spiced slices of beef ($9) and shredded cucumber salad ($3). 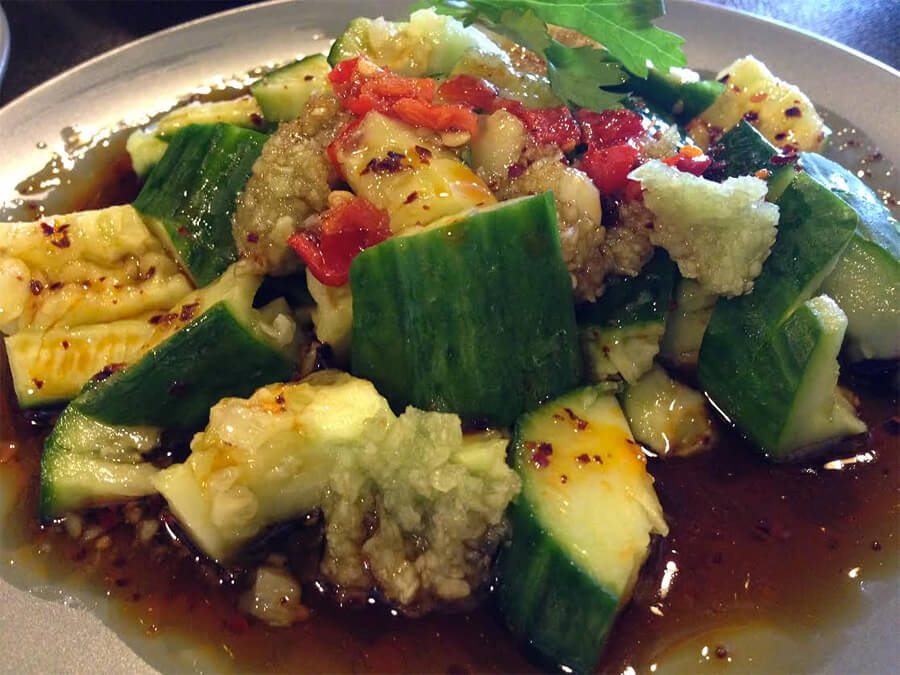 I loved all the cold cuts! The cucumber salad was a really delightful surprise. It was so refreshing – and seemingly so simple, but the sauce and seasonings (and garlic) really took it to the next level (plus the cost is so affordable!) I absolutely recommend everyone starts with their own cucumber salad. 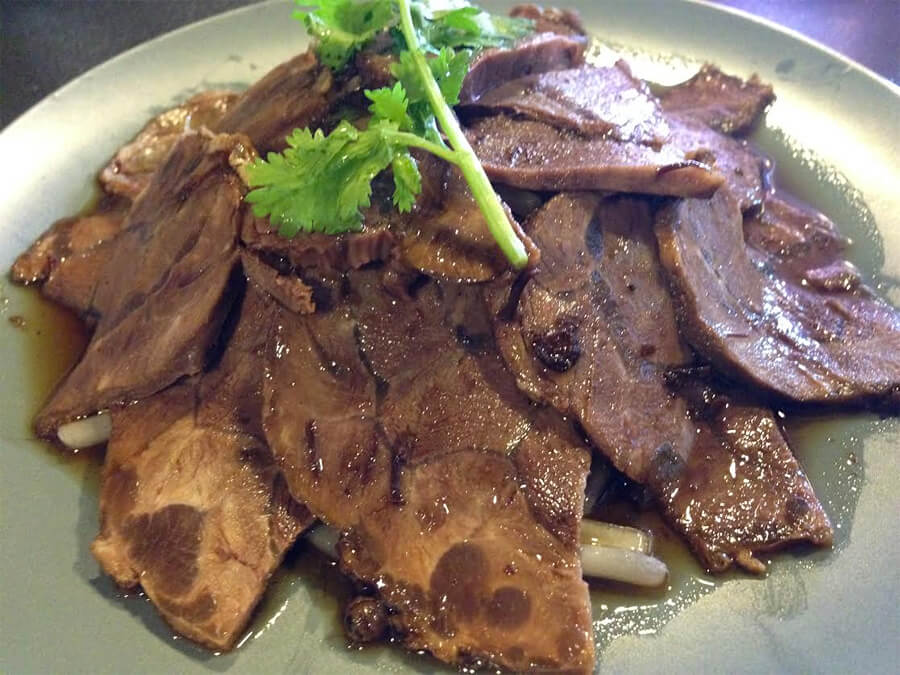 Garlic everything is the general theme throughout all the dishes. If you’re not a fan of garlic (or allergic, like my friend Brittney) then unfortunately LETS Grill will not be good for you. But if you’re into garlic, and salt, and spices (which defines that northeastern Chinese style of cooking) then you’re in for a great meal! Lucky for all of us, we are big fans of garlic, salt, and spices! 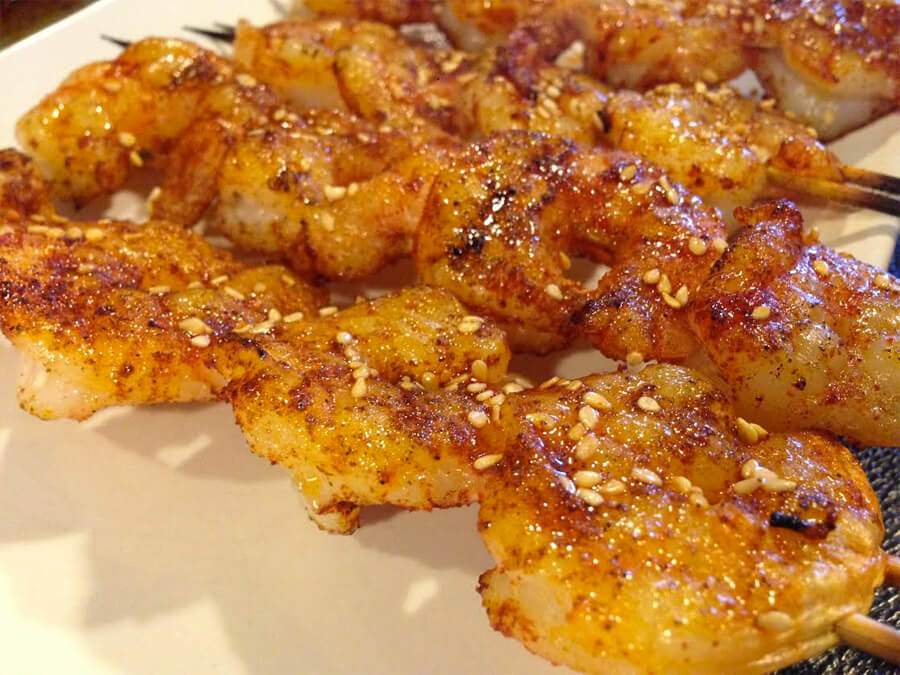 I think the portion sizes are pretty good for the cost. Some are better value than others – for example, $1.20 for a skewer of grilled mushrooms is a good deal, $1.20 for a single bunch of enoki mushrooms, maybe not the best deal. $3 for the cucumber salad – amazing! $9 for the spiced beef, not as good (you think it’s a lot at first but there’s just a lot of beansprouts underneath the meat making it rise higher). The bacon wrapped asparagus ($5.25) is probably on the pricier end, but bacon-wrapped anything… is so good. And Mike really doesn’t like asparagus but was eating that dish up. 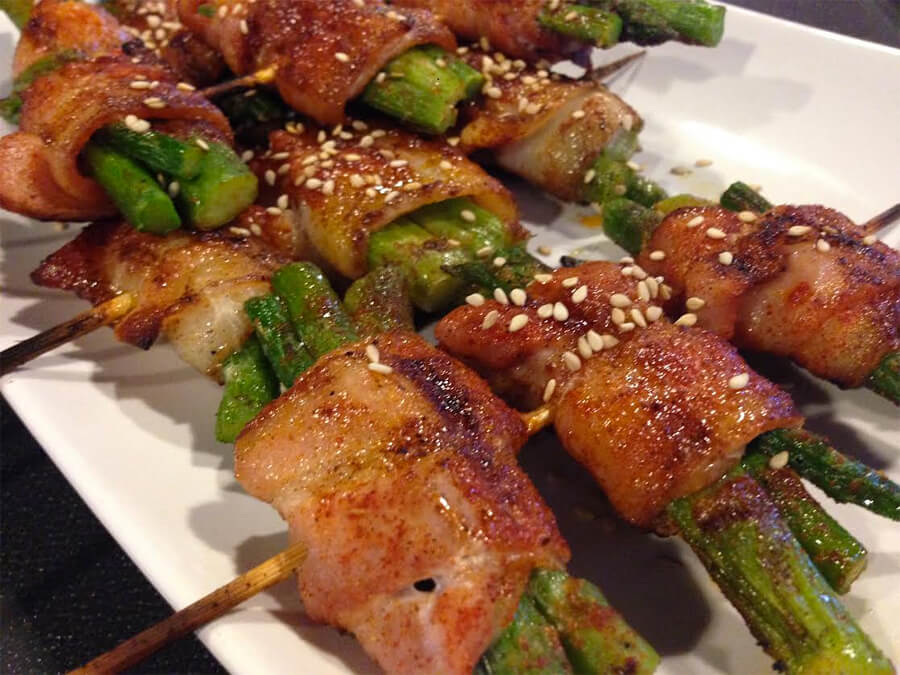 I think the prices for all the kebabs are fantastic value! The lamb was great (you can get it spicy or mild)! Mike actually never orders / rarely eats lamb but was devouring LETS Grill’s lamb kebabs, he really enjoyed it. My husband can be a fairly picky eater so I really take this as a raving review from him! 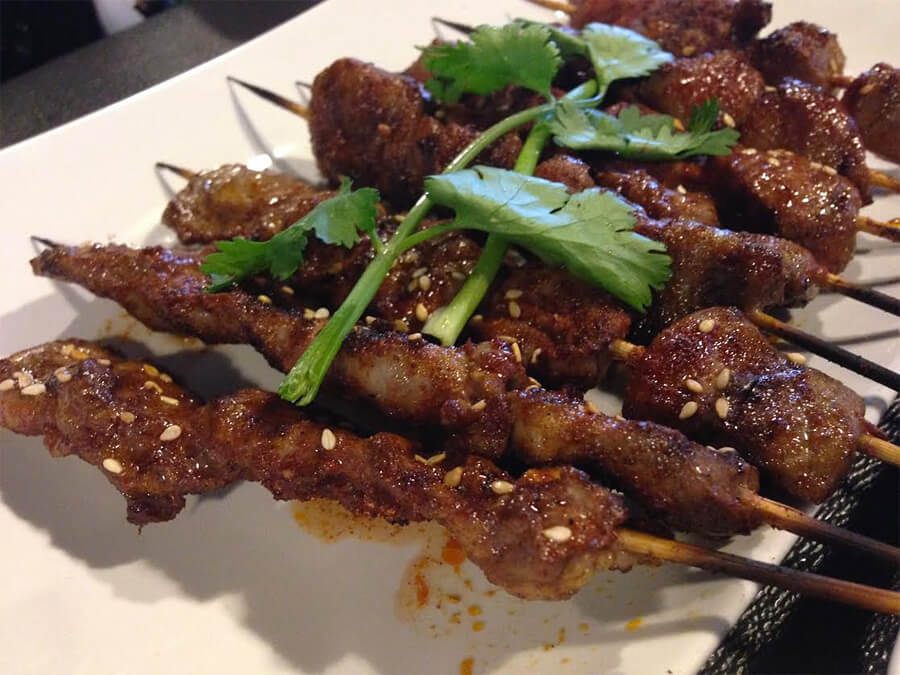 We weren’t huge fans of the chicken hearts (but I think that’s an acquired taste kind of thing to begin with), and I thought the shrimp skewers were a touch too charred for my liking. 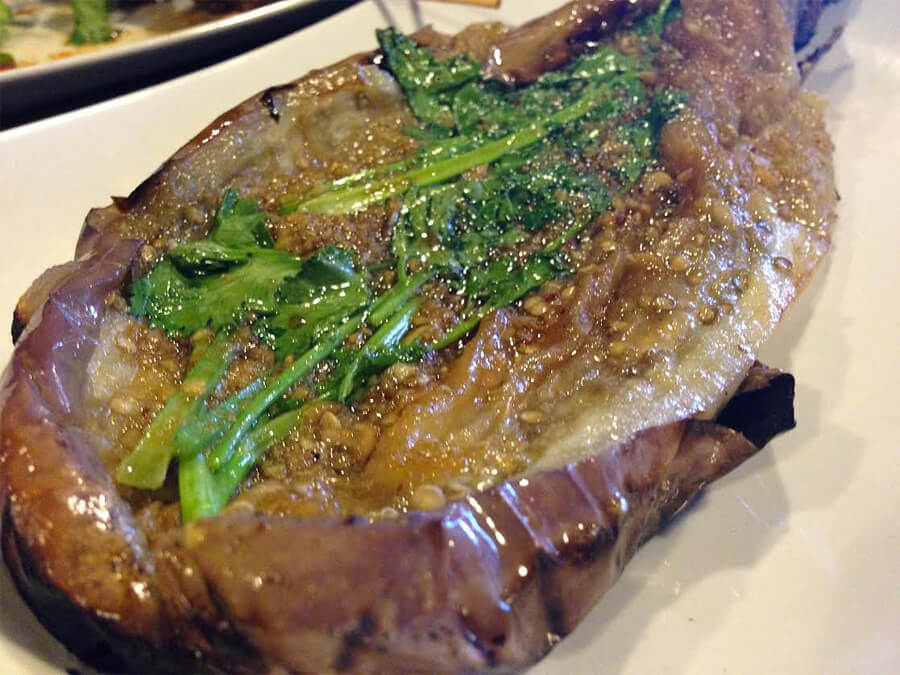 Grilled Eggplant with Smashed Garlic ($3 each) at LETS Grill Restaurant.

The grilled eggplant (and a few other dishes) are seasoned with a special family recipe that was quite tasty (again – pretty heavy on the garlic). 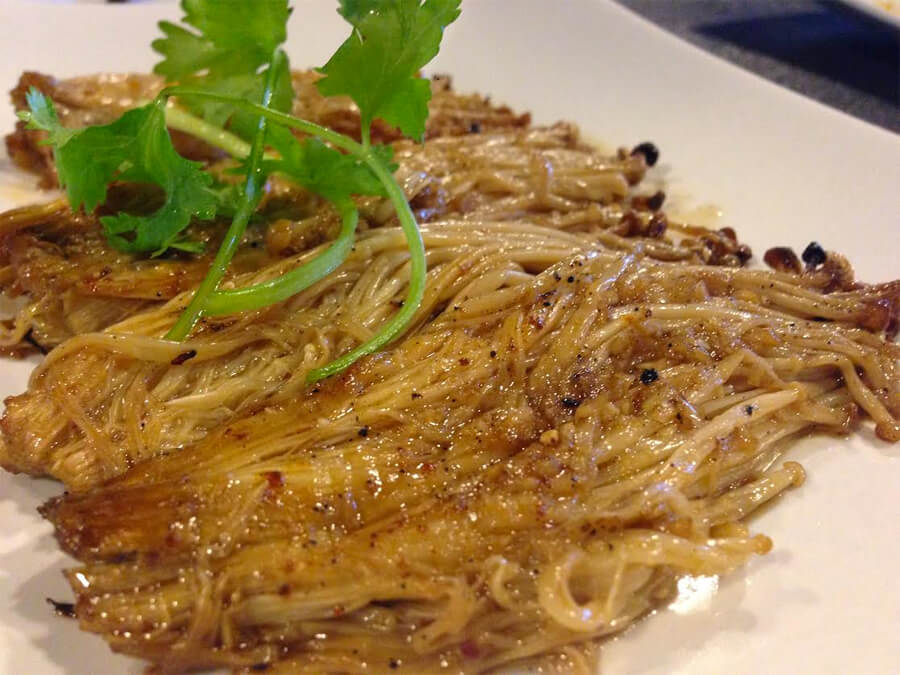 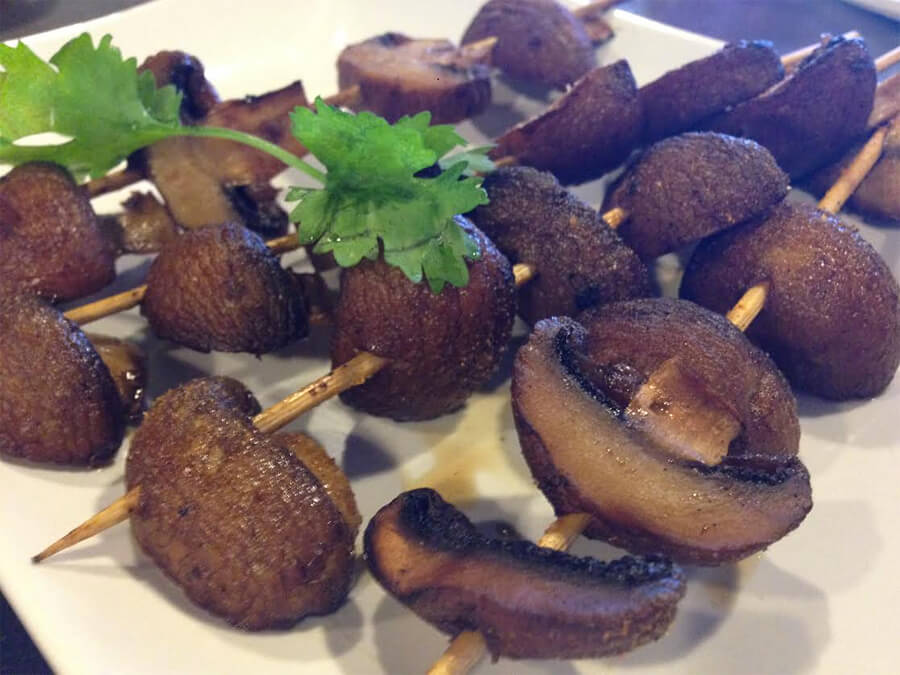 And for dessert – keeping in line with the kebab / stuff on a stick theme – we got some Melona brand banana ice cream popsicles. Dessert isn’t actually listed on their menu but they brought it out for us (so if you go and you want a sweet treat to end the meal, just ask them what they have!) 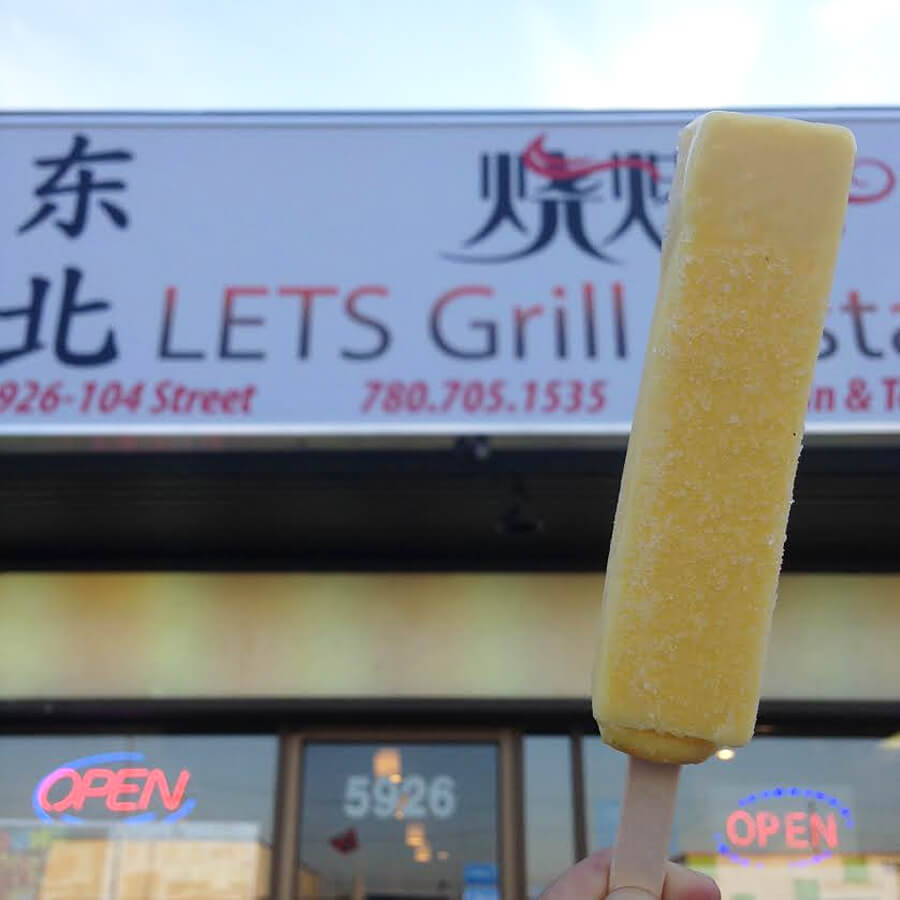 Dinner at LETS Grill is very much small plates whereas for lunch they sell a combination of kebabs with rice and veggies. I really do think the prices are quite fair for what you’re getting and I am still thinking about how refreshing and delicious that cucumber salad was! The lamb skewers were also the best skewers of the meal. Mike and I really had no complaints about this place – but we also don’t have any other experience with northeastern style Chinese food. Nic and Billy have more of that experience and thought the food was alright (they weren’t as excited as we were for sure), but I also chatted with my Chinese friend Lesley who said her parents tried LETS Grill the week before and also really enjoyed it, and my friend Freya (who puts on the Chinatown YEG Food Crawls) says it’s one of her new favourite places!

LETS Grill also offers some soups (a Chinese dough drop soup and a Chinese-style Borscht soup) which I’d like to try on my next visit there. And because I am obsessed with white rice, I ordered a side for myself to complement all the different meats and veg so I’d recommend you do the same (warning: it will make you more full so you might not be able to try as many of the dishes).

I could see how some of the garlic seasoning on some of the dishes might be a bit overpowering – or at least, after you’ve had a few dishes, it might start getting to be a bit much. But I really dig the spices and seasoning overall (and again, Mike and I are big garlic fans) so overall our meal was really good!

I always feel terribly sad if a restaurant doesn’t make it, especially after hearing how passionate these two are about their food and their business, so I am really hoping they’re able to get more people in the door soon. I know once they do, the food will speak for itself! We are looking forward to coming back and I really think LETS Grill could be something of a sleeper hit in the city. I feel like Tao Garden only recently exploded in the last few months and their not-really-available-anywhere-else build your own noodle bowl appeal could be credited for that. I think LETS Grill’s northeastern style Chinese small plates (that isn’t dim sum) could be very appealing for a lot of people! Go with 2-4 people so you can get lots of things and split the costs.

Also the fact that it’s conveniently located next to Escape City means it will be the perfect pre-or-post live action escape game food stop but for those in the area, it’s a nice lunch addition too. I used to work at Global just down the road and I know if this had been around back when I was still there, I’d be making lunch stops frequently!

If you try LETS Grill, please let me know what you think!