There’s so many things to do in Edmonton but you’ll still find a lot of people saying there isn’t. I couldn’t disagree with them more! Now we’ve got a new addition to the city’s entertainment options – BreakOut Entertainment is a live action escape game that originated and is super popular in Asia, and has now made its way to Edmonton. It’s an awesome and unique way to spend your afternoon or evening out! 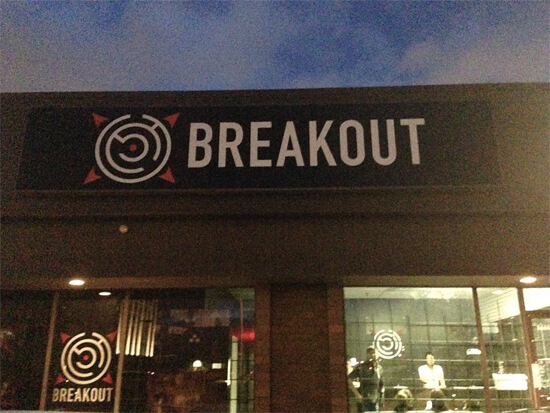 Live escape games work like this: you’re locked in a room with a group of your friends (or grouped with strangers if there’s only a couple of you). Each room has a different theme and storyline. 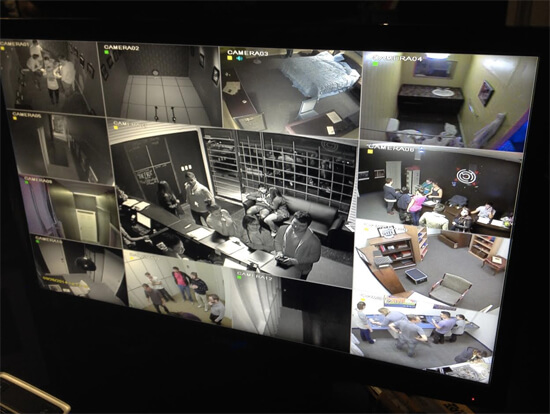 Cameras showing all of the escape rooms.

You’re given some backstory based on the theme you’ve chosen including your mission for that room. Then you’re given a certain amount of time (BreakOut’s is 45 minutes, other places are an hour, it varies), to complete the mission and break out/escape from the room. To do that, you must solve various puzzles placed within the room.

It’s a pretty great concept. BreakOut is brought to Edmonton by three friends from Vancouver – Jimmy, Allan and Sam. Three guys who love escape games and saw an opportunity to bring more entertainment options to this city. They describe the experience of BreakOut as “a new and unique way where people can interact and have fun… We challenge participants with their intelligence, their reasoning, and their teamwork.” 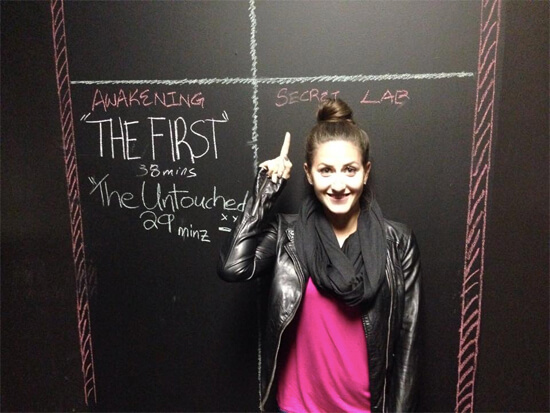 We chose the Secret Lab for our first escape room!

BreakOut, located at 16604 109 Avenue in Mayfield Plaza, is the first live action escape game in Edmonton. They currently offer four rooms: Secret Lab, 1408, Le Gala, and The Awakening. Two of those rooms are scarier than the other two. For my first time trying it on Friday, my group chose Secret Lab (one of the less scary ones!) 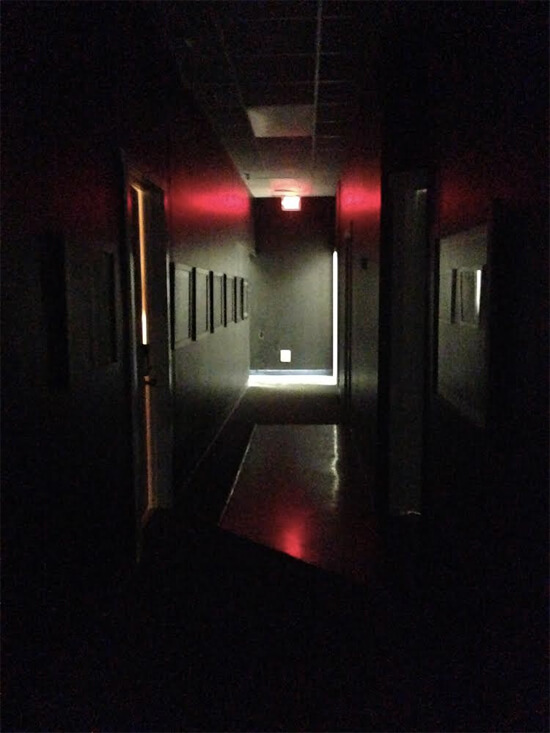 Hallway to the escape rooms!

They don’t let you bring phones into the rooms – there are some magnets in the rooms that might affect the phones but also understandably they don’t want people taking photos of all the puzzles and room contents and sharing/spoiling it for others. 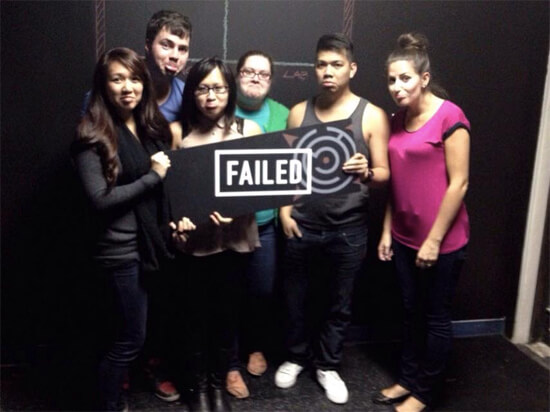 We tried… failed… but had so much fun doing the BreakOut Live Action Escape Game!

I went to try it with Mike and our friends Lisa, Denise, Tony and Brittney. None of us had ever tried a live escape game before! We had joked before we got there that we would be arguing, personalities would clash, and friendships would end because we are all pretty Type A would-be leaders who may not be great with teamwork, especially under pressure.

But in the end we all worked together quite well! Although we didn’t complete the mission and escape the room before time ran out, we all worked hard and were super excited with the puzzles we solved. Our downfall in the end was that we all are bad at math and the last two steps we needed to solve to win the game were both math-based. We also wasted a lot of item focusing on solving some puzzles that we thought were crucial to the game, but ended up not being (but how would you know which to focus on?? That’s part of the fun!) 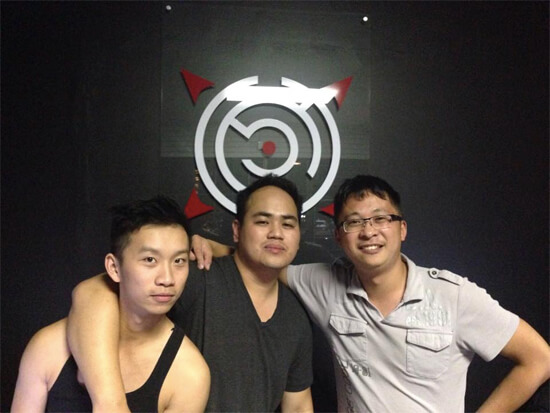 Congrats to Sam, Allan and Jimmy for launching BreakOut in Edmonton!

Overall, we had a great time trying BreakOut Entertainment! We all thought it was interactive, fun, and challenging. It’s definitely a unique thing to do – over your typical dinner or movie for example. It’s great as a date night and even better with a group of friends. Each room can have up to six players. If you don’t have a group of six you might be paired with strangers who have also chosen the same game time. You can book/reserve a time online – and it’s not just at night either, you can do it during the afternoon if you want (but I feel like it’s more fun and intense in a nightly setting).

It costs $25 per person to play which I think is super reasonable for the amount of engaging/interactive fun that you get. My whole group wants to do it again (in fact we would’ve done it again that night if they hadn’t been all booked up already. Reserving in advance online is recommended).

Congrats and good luck to co-owners Jimmy, Sam and Allan! What an awesome addition to Edmonton. I can’t wait to try all the rooms and to see what new rooms/puzzles they come up with. The building itself is not that big so I wonder if it gets popular enough if they’ll expand to a bigger location.

In the meantime, I am lucky enough to have gotten free passes to give away for you awesome readers! (Thanks Allan!) 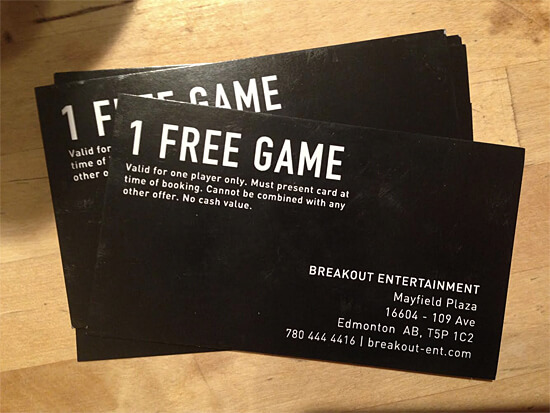 I’m giving away three pairs of admission passes (valued at $25 each) to BreakOut!

Please note comments are moderated so don’t worry if your comment doesn’t appear right away! This giveaway closes on Saturday, Oct. 4 at noon. I will randomly choose three winners based on the entries.

Good luck and spread the word! :)

Also check out this great story about BreakOut from CTV Edmonton to get an even better feel of what you can expect when you go!

Congratulations to Jennifer, Chantelle and Stephanie (@jguan, @The_Tilly and @sk_gonzales), you were randomly selected as winners for the BreakOut Edmonton passes! Thanks to everyone who entered. There were 78 total entries.

Linda Hoang is a Canadian blogger based in Edmonton, Alberta, who writes about travel, food, lifestyle and pet topics. She's also a seasoned social media/digital strategist with a journalism background, the founder of the Edmonton International Cat Festival and co-founder of Stop Race Based Hate, an online anti-racism education tool. Linda loves exploring the world with her partner Mike, eating their way through cities, supporting local businesses, and photographing Instagrammable Walls. Linda is a fur-mom to two cats and two dogs.
PrevPreviousAlberta Primetime: Pop Culture Panel (September 25 2014)
NextSocial Media Notes (#43) – Links for the Week of September 22 – 28Next