Eescape offers people a chance to participate in an emerging world phenomenon. We offer some of the most exciting sleuthing action to be found. Experience real life adventure gaming and entertainment. Challenge your intelligence with a variety of different missions. Find the clues, solve the riddles, and find a way out of each of our meticulously designed rooms with logical reasonings. Let’s face it, few things are as exciting as the thrill of completing a mission in a trapped environment!

For those new to the live action escape genre: basically you choose a themed room, get locked in, briefed on the room’s scenario/problem you need to solve, and then you get 45 minutes to work with your team on solving various puzzles within the room in order to escape before the clock runs out.

Eescape is located downtown at 10132 105 Street in the basement of Sylbert Place building.

They just opened last weekend and had been offering free beta testing to anyone who signed up on their site. They’re kicking off with three rooms: Held Hostage, Back to the Future, and National Security.

Mike and I went to try two different rooms with our friends – Held Hostage and Back to the Future – during the beta testing. 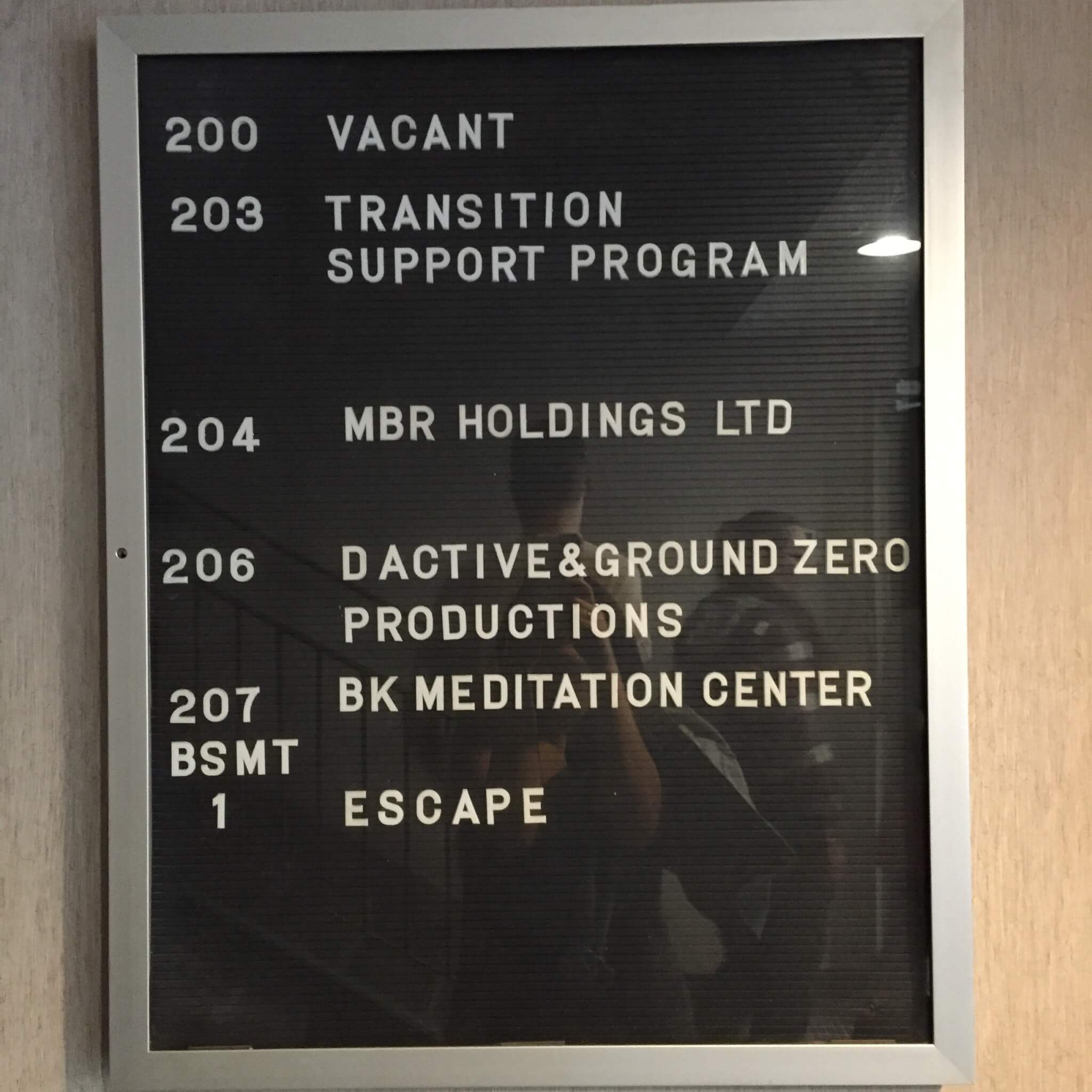 Eescape in the basement of the building – perfect.

You’re asked to put your cell phones/bags in a locker before you enter the rooms and obviously I don’t want to spoil anything for you, so I’ll just give the site summary for the rooms we tried, and a quick summary of our thoughts on it. 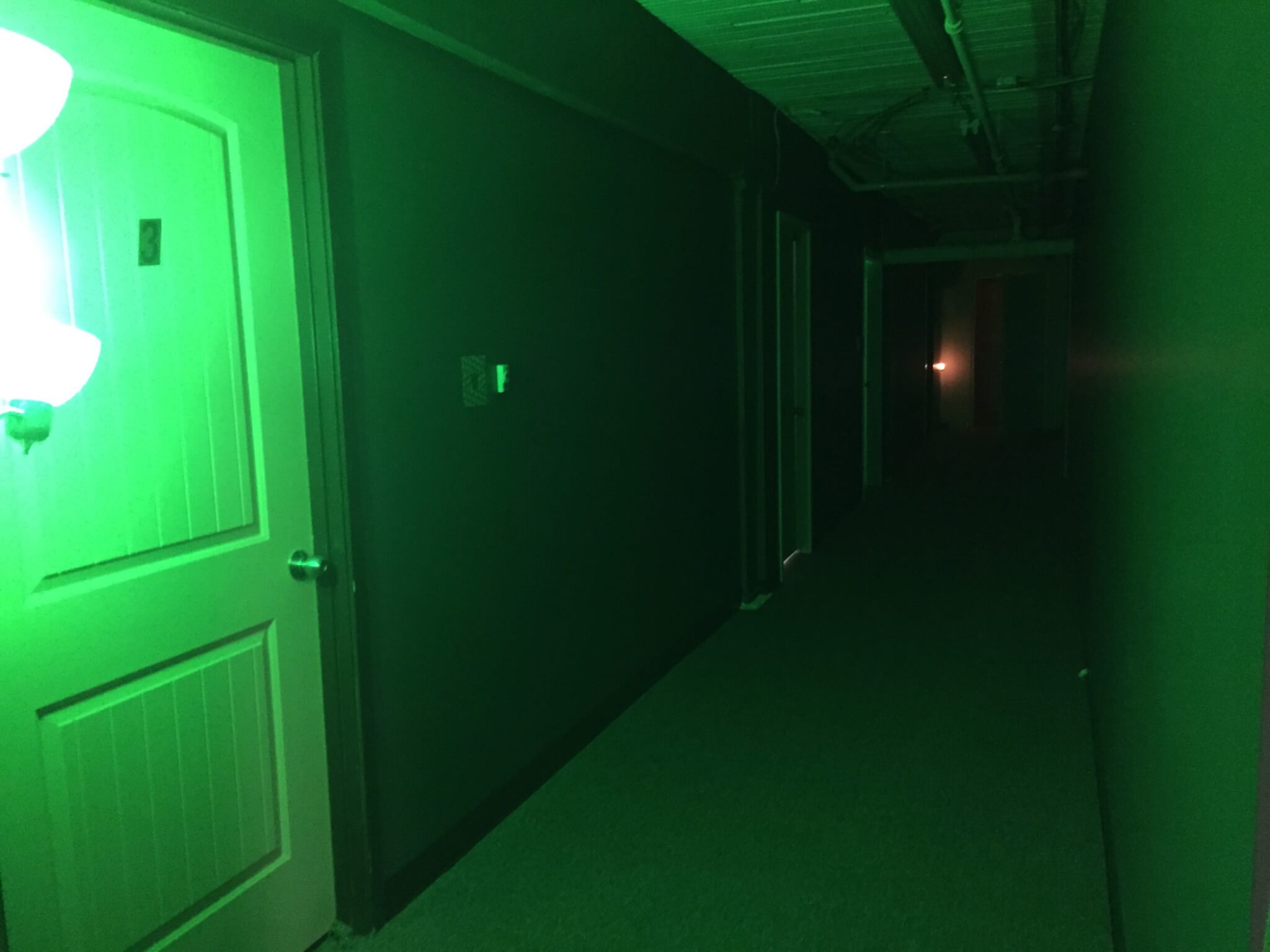 Creepy Eescape hallway – you get blindfolded before being led to your room!

Before you enter into any room, you get blindfolded. It’s a simple, yet very effective way to set the tone for the rest of the game.

Held Hostage is where my close friend Elizabeth is kidnapped by a group of gangsters who are asking for $1 million cash for her safe return – or else they’ll kill her. They’ve locked her in an abandoned building. We’ve tracked her down to the building but need to find where she’s been locked up before the gangsters (who have stepped out for food) return!

In Back to the Future, we’re sent back in time to 1955. You’re confused, stunned, and your team members need to solve puzzles in the room in order to get back to present day.

We weren’t able to solve and break out of Back to the Future (though we were VERY close). We also found it very difficult (we basically solved nothing on our own – and relied solely on the hints that were given – you get 2 hints per game). We also found the backstory to be a little lacking. Held Hostage on the other hand – we all loved! It featured a lot more puzzles (that were a good mix of easy and difficult). There was also more individual success in Held Hostage, where there was at least one sort of shining moment or puzzle solved by one member on the team. We did end up solving Held Hostage – so that could also be why we think more favourably towards that room (only 20% of all teams who play escape games manage to escape). 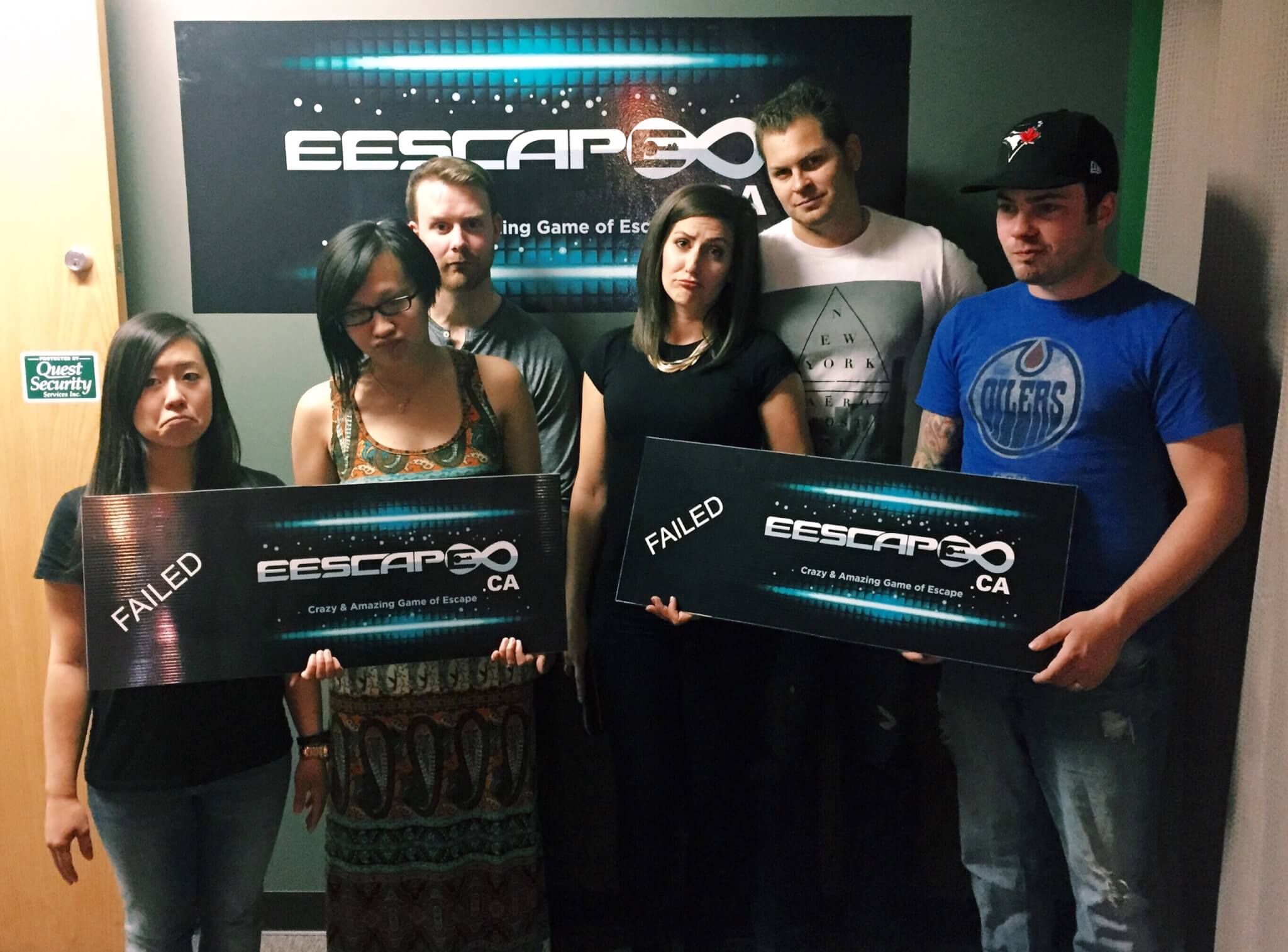 Sad faces because we failed to escape Back to the Future. 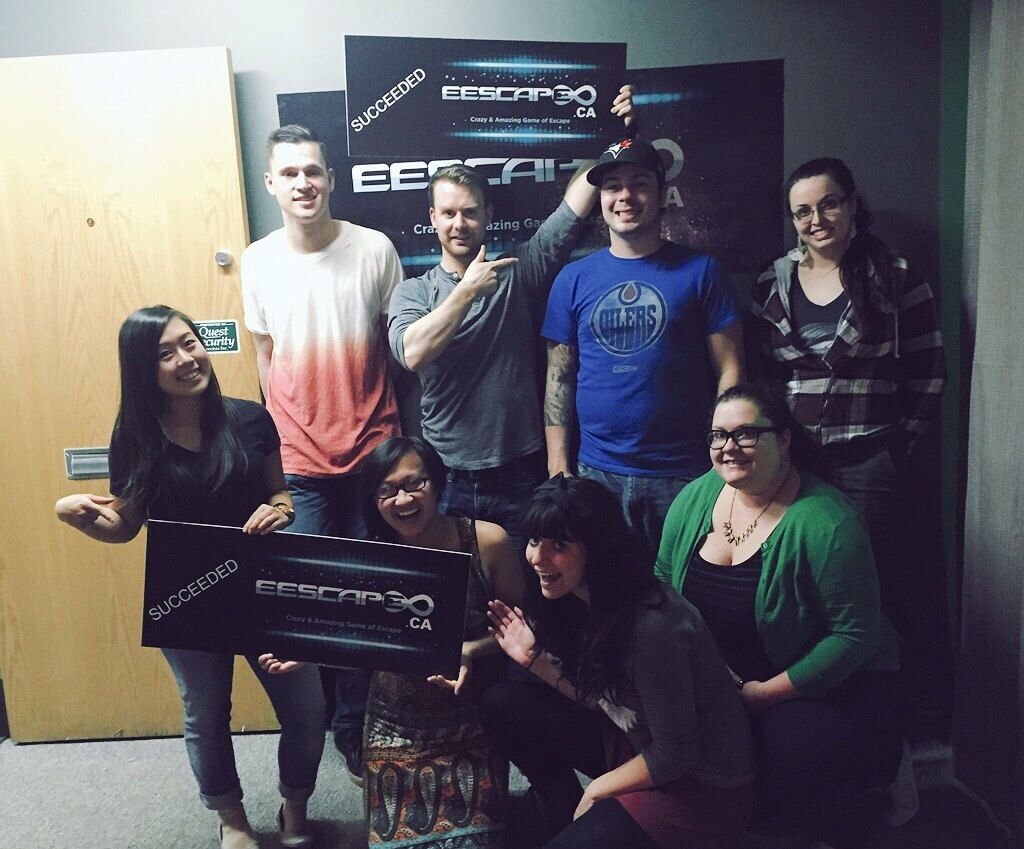 Eescape’s owner, Crystal, says the niche industry is gaining more popularity in Canada (and obviously thought there was enough interest here in Edmonton to launch Eescape!)

In fact, BreakOut is launching a Calgary location soon, and just glancing over their online bookings today show that they’re still pretty booked up – even more than a year later (good for them!)

Eescape costs $24.99 per game, per person, which is on par with BreakOut.

If we’re comparing the two, I think they both do some things better than the other – for example we thought the production value/set-up of the rooms in Eescape were very good (better than the ones we’ve tried in BreakOut). But Eescape’s hint system wasn’t as strong as BreakOut’s (where BreakOut will try to get a feel for what you’ve discovered so far and where you’re at in the puzzle before they give a hint or ask if you’ve checked something, Eescape’s hints were much more blunt).

Our biggest feedback for both escape games (and maybe all escape games) is that room scenarios/backstories could be just a bit more in-depth, and quality of some of set design/etc. could be better.

But overall, lots of fun! And as I’d written with the previous escape game, it’s just such a great alternative to your usual nights out (either date night or friend hang outs, or team building!) Eescape is a welcome addition to the Edmonton entertainment scene and I’m sure it won’t be the last we’ll see of local live action escape. 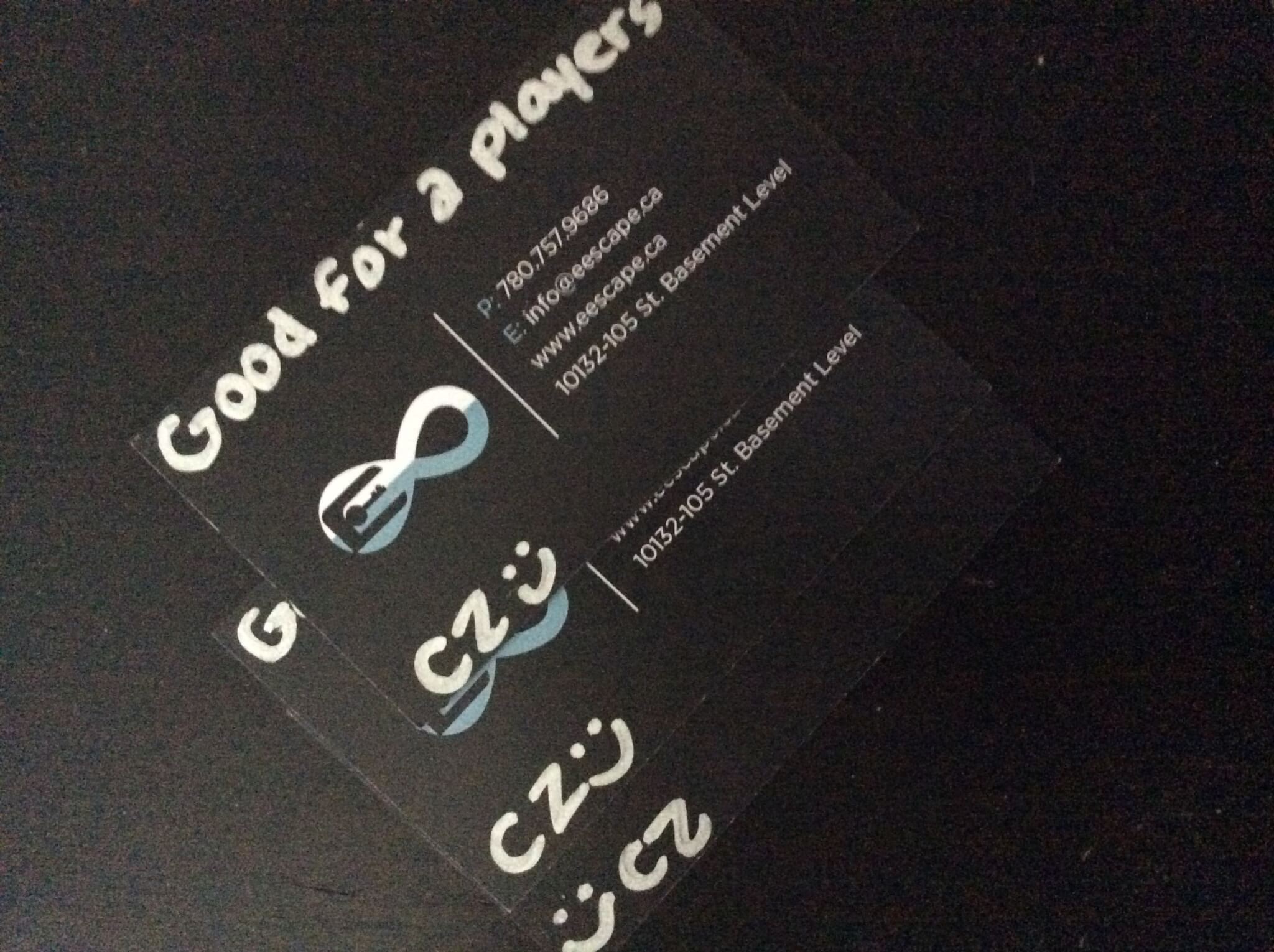 I’m giving away three pairs of passes to Eescape!

I’m excited that Crystal of Eescape has given me three pairs of Eescape admission passes to give away to readers!

ENTER TO WIN ONE OF THREE ADMISSION PASSES TO EESCAPE!

I’m giving away three pairs of admission passes (each pair valued at $50) to Eescape!

Please note comments are moderated so don’t worry if your comment doesn’t appear right away! This giveaway closes on Friday, June 5, 2015 at 10 p.m. I will randomly choose three winners based on the entries after the contest closes.

Congratulations to Alouise, Ashelyn, and Cindy – who have each won a pair of passes to try Eescape! Thank you to everyone who entered!! Please go give it a try anyway :)

Linda Hoang is a Canadian blogger based in Edmonton, Alberta, who writes about travel, food lifestyle and pet topics. She's also a seasoned social media/digital strategist with a journalism background. Linda loves exploring the world with her husband Mike, eating their way through cities, supporting local businesses, and photographing Instagrammable Walls. She is the founder of the Edmonton International Cat Festival and a fur-mom to two cats and two dogs.
PrevPreviousGiveaway: Tickets to Honey & Hot Sauce (May 26) at The Common
NextReview: Brewsters (Edmonton A to Z Restaurant Series)Next