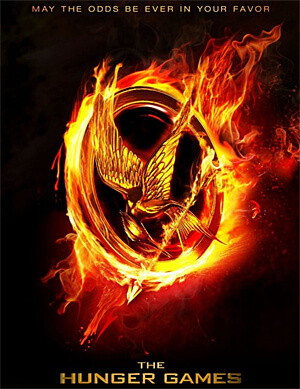 On Thursday, Mike and I attended the advance screening of The Hunger Games!!! *throws confetti* We got free tickets through @shesconnected and @ToshibaCanada off of Twitter. (Thank you so much!!!)

Overall, I really enjoyed the movie! I thought the acting was well done, casting was well done, screenplay was good (it was pretty accurate to the book), the fighting and kill scenes were gruesome as it needed to be, and there were enough funny, nice moments scattered between the bloodshed that helped keep the whole movie from being too tense.

At the same time there’s definitely a few things I didn’t like all that much about the movie but let’s start with the points I particularly enjoyed. Sidenote: the following points contains spoilers! 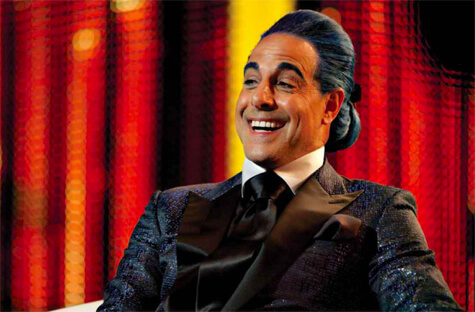 I am a huge fan of Stanley Tucci as an actor and was very excited when I found out he was going to be a part of The Hunger Games. I think he did a fantastic job portraying Caesar Flickerman. He is really the biggest comic relief throughout the movie and was key in making sure the darkness and the killing in the story wasn’t too heavy. I loved his interview scenes and his narration of the games as it happened. 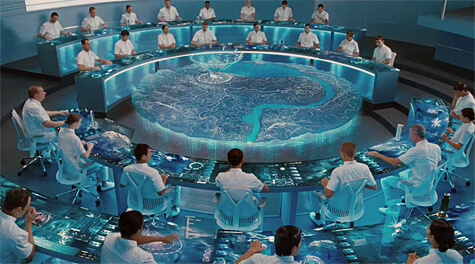 I LOVED the scenes showing the Gamemakers in the control game! To see these people starting forest fires, shooting fireballs, and dropping mutated beasts into the arena, it was cruel but also so very cool. You don’t really get to see them do this in the books. Plus I never even thought about it really while reading – how the Gamemakers were altering the arena and changing the game to make things more exciting. It was just a fact that it was happening. The book never delved into how they were doing it so to see it presented visually on screen with everyone in a slick control room with this lethal virtual 3D system was a great plus to the film.

This is a very brief, very small detail but a very important one for me. I kept wondering if they were going to include Prim’s cat Buttercup in the movies or not and when the movie first began and they were introducing Prim and showing the mother sleeping – for a second I was ready to be completely disappointed because it didn’t look like Buttercup was there. But just before Katniss leaves the house, there Buttercup is! It was a scene just a few seconds long but it was those few glorious seconds that ensured I wouldn’t hate the movie based on their exclusion of the cat! :) 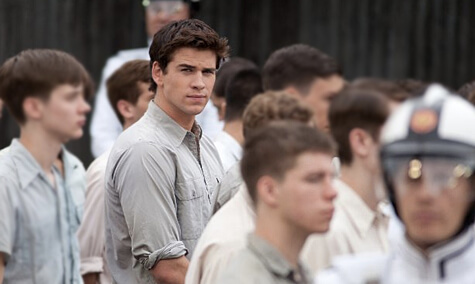 They’re not going to be winning any Oscars but the actors in The Hunger Games are good and did a solid job. I can easily say that the acting in the first Hunger Games movie is a million times better than the acting in the first Harry Potter or the first Twilight movies. I didn’t cringe at all, which is huge because my face was basically cringing the entire time while watching the first Harry Potter and Twilight movies (awful, awful acting). Elizabeth Banks and Woody Harrelson were great as Effie and Haymitch. They portrayed them basically as I had pictured them to be and as with Stanley Tucci their characters were great for comic relief. Overall I’d say the casting was spot on. Jennifer Lawrence as Katniss, Liam Hemsworth as Gale, Josh Hutcherson as Peeta. It all worked for me. Also, Liam Hemsworth is sooo pretty.

Now here are some points that stuck out for me (in a bad way):

The camera was too shaky at times. In fact, most of the time. I’m really not a fan of shaky camera-style shooting and done in just the right dosage will actually give me a huge headache. Luckily the shaky cam in The Hunger Games wasn’t quite enough to induce a migraine but it was notable. For the next two movies I hope they decide to go with less of a shake. 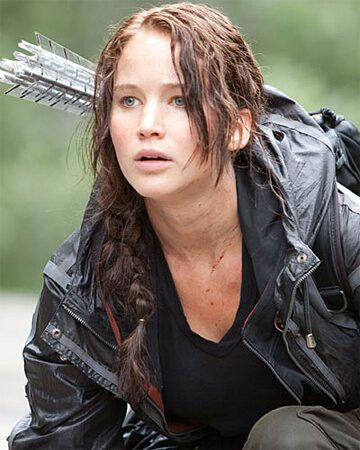 The Mockingjay pin is supposed to become the symbol of the uprising. Katniss is the Mockingjay. And yet I didn’t really feel the scenes that included the pin really alluded to its importance. I also didn’t like that you didn’t really see it at all throughout the entire Hunger Games. I will have to refresh my memory of whether or not it was kept hidden in the books but I feel that it wasn’t (because people had to have seen it in order for it to start being imitated and made into a fashion trend for people in the Capitol). It always seemed to be re-pinned on her clothes and yet in the movie whenever it was pinned it seemed to be covered or hidden. Not to mention Katniss acquiring the pin was one of the few plot points they actually changed from book to movie. I didn’t really like that she just picked it up at The Hob randomly. I can see how Madge (the person who originally gives her the pin in the book) could be an expendable character but I just had an off feeling about the movie’s portrayal of the Mockingjay pin.

The biggest issue I had with the movie is that I didn’t feel like I cared as much about Katniss and Peeta and others, as I did in the book. A lot of the book is in Katniss’ head, it’s a lot of her thoughts and her working through what’s happening and what to do next, etc. Obviously that’s hard to show in movie form unless they did some kind of a voiceover of her thoughts, which I’m sure the movie makers probably mulled over but decided against for a reason. Still without that – knowing what Katniss is thinking and what’s going through her mind – it made it hard for me to really connect and really care or even believe in some of the situations. For example I was 100% invested in the Peeta/Katniss love in the book. In the movie? Not so much. I didn’t feel that internal struggle of Katniss working through her feelings for Peeta and Gale and what she had to do survive and keep Peeta alive, etc. It didn’t really feel that real. I mean Peeta never even says he loves Katniss in the movie, just that he has a “crush” on her. I think they chose to go with that word because the audience wouldn’t believe in the love. Believed it in the books, not in the movie. Of course there were some scenes where there was definitely emotion – Katniss volunteering for Prim, Gale being upset seeing Katniss and Peeta together, some of the Katniss and Rue scenes, but it just felt like something was missing and I can’t really fault the movie that much because I don’t think you ever really get all of the emotions and details that you find in a book – properly and fully conveyed when it gets turned into a movie, you just don’t. (Except for maybe The Notebook movie!) 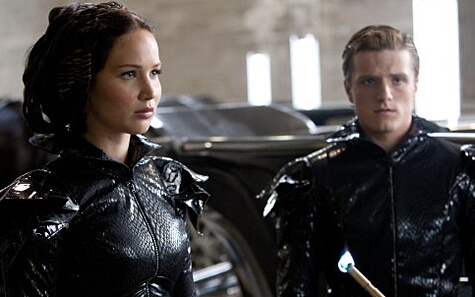 It is unfortunate that “Capitol” Peeta means slicking back his hair because it really isn’t a good look for him, lol. Messy hair Peeta in the District, almost dying in the arena, that’s a much better look for him. It has to be said, lol. I’m not a fan of the slick back look!

Mike disagrees with my negative opinions for the most part. He loved the movie and said it was as good if not better than the books. He didn’t think Josh Hutcherson would have made a good Peeta but by the end of the movie he said it worked. He did agree the camera was a tad shaky but it didn’t bother him that much.

The advance screening was fun! It was packed but we got good seats. Mike also bought me a Mockingjay pin of my own!!! :) 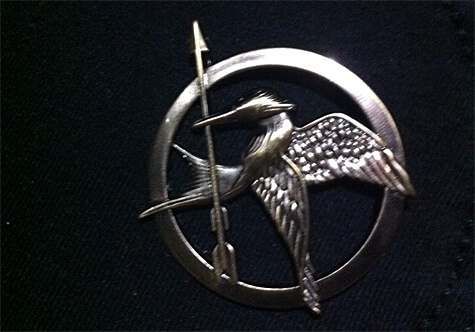 So awesome. Mike also got a free Hunger Games poster, which we probably won’t ever put up because come on that’s a little tacky, lol. 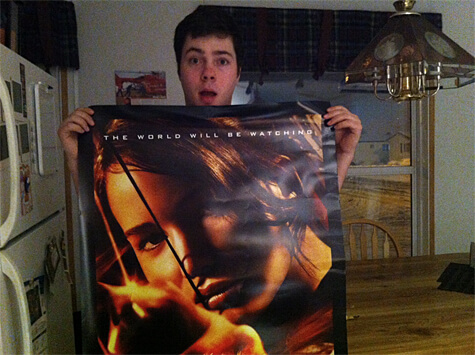 Again a big thanks to @shesconnected and @ToshibaCanada for the tickets!!!

So what did you think of The Hunger Games?

Agree/disagree with my points?

Linda Hoang is a Canadian blogger based in Edmonton, Alberta, who writes about travel, food, lifestyle and pet topics. She's also a seasoned social media/digital strategist with a journalism background, the founder of the Edmonton International Cat Festival and co-founder of Stop Race Based Hate, an online anti-racism education tool. Linda loves exploring the world with her partner Mike, eating their way through cities, supporting local businesses, and photographing Instagrammable Walls. Linda is a fur-mom to two cats and two dogs.
PrevPreviousClicks of the Day: Thursday, March 22, 2012 Edition!
NextClicks of the Day: March 23, 24, 25 2012 Weekend Edition!Next