“A month after Premier Alison Redford announced she was ordering an independent review of Alberta’s rising power prices, the provincial government has formed a four-member independent committee to help address the situation… Since last April, the regulated rate has shown a general upwards trend. Gray notes electricity prices have gone up, even though natural gas, which is used for electrical generation in some cases is cheaper than it has been in a decade.”

Hopefully this helps lower some bills.

“Alberta’s chief electoral officer has found 23 cases where improper donations to political parties and constituency associations were made by municipalities and other public bodies. In a news release, Elections Alberta said administrative penalties will be applied in 15 cases to “prohibited corporations” that made donations.”

“A 93-year-old patient in an Edmonton continuing care facility died in 2008 after she was injected with a powerful painkiller 10 times the amount prescribed. A fatality inquiry into the death of Lucy Lecavalier says the emaciated woman, who had cancer and was awaiting placement in palliative care, died less than an hour after a licensed practical nurse at CapitalCare Norwood administered a fatal dose of Dilaudid. In a report released Thursday, Provincial Court Judge J.T. Henderson ruled Lecavalier’s death an accident and recommended that CapitalCare Norwood implement protocols with sufficient cross checks and safety procedures to avoid mistakes leading to medication errors.”

“Army Staff Sgt. Robert Bales will be charged with 17 counts of murder, assault and a string of other offences in the massacre of Afghan villagers as they slept, a U.S. official said. The charges signed against Bales include 17 counts of murder, six counts of attempted murder and six counts of aggravated assault as well as dereliction of duty and other violations of military law, the official said on condition of anonymity because the charges had not been announced.”

“U.S. President Barack Obama pushed Thursday for the speedy approval for the southern leg of TransCanada’s Keystone XL pipeline as he insisted oil has an important place in his national energy plans. ‘Today, I am directing my administration to cut through red tape, break through bureaucratic hurdles and make this project a priority,’ Obama said to applause as he stood in front of stacks of pipe to be used to build a portion of Keystone XL from Cushing, Okla., to Gulf Coast refineries.”

“A landmark report in Quebec recommends that doctors be allowed in exceptional circumstances to help the terminally ill die if that is what the patients want.”

I would agree with this.

“While it’s generally accepted that memories are stored somewhere, somehow in our brains, the exact process has never been entirely understood… Now, a team of scientists believe that they may have figured out what’s going on. ‘This could open up amazing new possibilities of dealing with memory loss problems, interfacing our brains with hybrid devices to augment and ‘refresh’ our memories.'”

“We’ve heard obesity can be “spread” between friends when we copy each other’s eating habits, but a new study in mice suggests obesity could actually be infectious. That’s right, infectious. As in, something you can catch.”

“A new law passed on Monday requires that male and female models in Israel must have a body mass index (or BMI, a measure of weight proportionate to height) of no less than 18.5—a standard used by the World Health Organization—or a note from a doctor saying they are not underweight before they can be hired for a modeling job. A six-foot-tall model, for example, must weigh no less than 136.5 pounds.”

“Free Botox and laser hair removal, free chemical peels and anti-cellulite treatments may at first seem shockingly frivolous in a country like Brazil — which, despite phenomenal economic growth in recent years that has lifted millions out of extreme poverty, still battles with diseases like tuberculosis and dengue. But the philosophy behind the more than 220 clinics across Brazil that treat people like Penha and thousands of maids, receptionists, waitresses and others is simple: Beauty is a right, and the poor deserve to be ravishing, too. The Brazilian Society of Aesthetic Medicine’s Rio clinic has performed free procedures on more than 14,000 patients since its founding in 1997.”

“As the fury over the practice of adding ‘pink slime’ to ground beef continues, news has emerged that several major retail grocery carriers are banning the sale of any ground beef containing the meat byproduct in their stores.”

“The workout will be killer. Your body, deadly. With the new Hunger Games-inspired exercise trend, we may be witnessing the perfect marriage between a pop culture phenomenon and the fitness industry’s love of a good pun. The popular classes, now launching in Canada, are based on the bestselling book series — and the movie opening this weekend — in which teenage “tributes” are forced to fight one another to the death using weaponry, agility, strength and savvy. It’s survival of the fittest — not unlike a health club.”

“The electric snail is here. There’s an electric cockroach too. Both are early experimental forays in a new line of research aimed at creating tiny, self-powered animal/machine hybrids as an alternative to tiny robots.”

*cue sentence about the end of the world/robots taking over*

“Canadians have been hanging up on Research in Motion’s BlackBerrys and answering iPhones. A technology expert said Thursday it’s no surprise Research In Motion (TSX:RIM) has been ousted from the top spot in the Canadian smartphone market by Apple’s iPhone.”

“Adobe is touting a bunch of new features in this version, but the biggest changes come in its new content-aware tools that let you quickly move subjects around in a photo and its new interface. It also comes packed with new video editing tools that allow you to edit timelines and create simple Photoshop-based filters. A ton of new features are packed in here, including a handy new blur tool, better cropping, layer improvements, and more.”

Haven’t given it a whirl yet but definitely will! I think the one I normally use is CS3 so I’m clearly quite behind, lol.

Lol. Oh people on the Internet.

“Zynga acquired Draw Something creator OMGPOP Wednesday. The company has not disclosed the cost of the sale, but AllThingsD reports the acquisition cost Zynga $180 million, plus another $30 million in employee retention payouts.”

I bet it will soon be renamed to Drawing with Friends, lol.

“Here’s how simple it is: ‘When you upload a video that could use a fixup, you’ll see a notification bar on the Upload page and in your Video Manager,’ YouTube states on its blog. ‘Click the button to fix it, and you’ll see a side by side preview to decide if you want to accept the edits.’ Editing software is expensive and can be time consuming to use. The new Video Manager ‘democratizes the editing feature,’ said a YouTube spokesperson.”

Crazy. The way of the future!

“‘Next stop Dow 57,757? Don’t count on it but Tuesday’s bullish session is in the books.’ That dash of market analysis on Twitter wasn’t an impromptu thought from an investor. It was a prewritten post, taken from a library of 140-character messages that had been approved by the compliance department of Morgan Stanley and sent out by financial advisers at Morgan Stanley Smith Barney. Firms like Morgan Stanley must tightly monitor communications to ensure that they are in compliance with securities regulations. As a result, they generally block employees from using social media sites like Twitter or even checking personal e-mail accounts at work.”

“According to a recent Gallup World Poll, 1.1 billion people, or one-quarter of the earth’s adults, want to move temporarily to another country in the hope of finding more profitable work. An additional 630 million people would like to move abroad permanently… It leads to opportunity and profits, but it also has high psychological costs. In nearly a decade’s research into the emotions and experiences of immigrants and migrants, I’ve discovered that many people who leave home in search of better prospects end up feeling displaced and depressed. Few speak openly of the substantial pain of leaving home.”

I’ve always had an itch to get away as well but know I’d miss my family too much. Would be a cool, temporary adventure, not a permanent thing.

“Serial entrepreneur Elon Musk says SpaceX is developing a plan for trips to Mars that will eventually cost just $500,000 per seat. Musk founded SpaceX 10 years ago and interplanetary travel has always been one of his goals for the company. Few details were provided about the Martian voyage, but Musk did say we can expect to hear more about the plan in less than a year.”

Too steep for me.

“Ongoing research shows that animals actually do have the capacity for music. But rather than liking classical or rock, Snowdon, an animal psychologist at the University of Wisconsin-Madison, has discovered that animals march to the beat of a different drum altogether. They enjoy what he calls “species-specific music”: tunes specially designed using the pitches, tones and tempos that are familiar to their particular species… On the basis of their results, Teie has started selling cat songs online (at $1.99 per song) through a company called ‘Music for Cats.'”

“Whitney Houston died from drowning in a hotel bathtub, but coroner’s officials said Thursday that heart disease and chronic cocaine use were contributing factors to the singer’s death.”

I don’t know if too many people were really surprised by such results. Sad still.

“There ain’t no reunion like an S Club reunion! Yes, it seems that the party-loving, seven-member British group that hit it big in the early 2000s has reportedly signed a seven-figure deal to reunite, nine years after disbanding.”

“At 2:20 a.m. on April 15, 1912, the “unsinkable” R.M.S. Titanic disappeared beneath the waves, taking with her 1,500 souls. One hundred years later, new technologies have revealed the most complete—and most intimate—images of the famous wreck.”

“Vending machines are synonymous with snacks and drinks, but there are some that break away from what is traditionally offered. For example, some vending machines in Japan dispense instant noodles, umbrellas, and even bananas.” 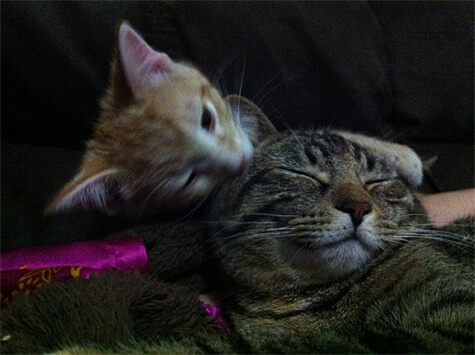 Linda Hoang is a Canadian blogger based in Edmonton, Alberta, who writes about travel, food lifestyle and pet topics. She's also a seasoned social media/digital strategist with a journalism background. Linda loves exploring the world with her husband Mike, eating their way through cities, supporting local businesses, and photographing Instagrammable Walls. She is the founder of the Edmonton International Cat Festival and a fur-mom to two cats and two dogs.
PrevPreviousReview: Sushi Garden
NextReview: The Hunger Games (Movie)Next