“Anti-racism protesters and white supremacists clashed briefly downtown Saturday afternoon before police formed a line between the two groups to keep them apart.”

So sad that racism and these “supremacists” still exist…

“Graham James could be out of jail in only six months. Information from the Parole Board of Canada, obtained late Friday by Global News in Winnipeg, shows the disgraced former hockey coach and sexual predator will be eligible for “unescorted temporary absences” and day parole on September 20, 2012. The Parole Board also confirms James is eligible for full parole just two months after that, on November 18.”

What a justice system.

“Traffic cops posing as panhandlers — so they can better spot drivers who are talking or texting on their cell phones.”

“Ottawa will never be confused for Canada’s wildest city, but the nation’s capital can now make a claim to infamy: It’s got more people who cheat on their significant others than any other metropolis in the country – at least, according to a controversial website. Ashley Madison, a Canadian site for people who want to cheat on their husbands, wives or other people they’re supposed to be committed to, has released a top 10 list of cheater-friendly cities in Canada as determined by membership per capita.”

“Vancouver’s Jenna Talackova was everything Miss Universe Canada was looking for when she was selected among 65 finalists for the 2012 competition, to be held in Toronto in May. But the Donald Trump–owned beauty pageant confirmed Friday that the 23-year-old has been disqualified from the competition. The reason, Talackova claims, is she was born male.”

“The prime minister’s long-anticipated announcement was made with his Japanese counterpart following a bilateral meeting here and came with pledges that an economic partnership would bring a bonanza of economic opportunity. ‘The potential for increased trade between us that will create jobs and growth and long-term prosperity is really enormous.'”

Nothing wrong with more trading opportunities.

“Changes to Canada’s Old Age Security program expected to be outlined in this week’s federal budget will mean higher costs for the provinces, territories and municipalities, analysts warn… The changes will mean other levels of government will be forced to top up social program supplements for low-income earners to make up for moving the qualification period by two years.”

“The United States has paid $50,000 in compensation for each Afghan killed in the shooting spree attributed to a U.S. soldier in southern Afghanistan, an Afghan official and a community elder said Sunday. Each wounded person received $11,000… A U.S. official confirmed that compensation had been paid but declined to discuss exact amounts, saying only that it reflected the devastating nature of the incident.”

“The federal government has offered to dip into its emergency supply of medications to help ease the ongoing drug shortage created by production problems at Sandoz Canada. The Public Health Agency of Canada (PHAC) has told provinces and territories it is willing to open up some of its holdings in the National Emergency Stockpile System to help alleviate demand for drugs that are in short supply.”

I suppose that’s what such an emergency stockpile system would be needed for.

“Breakfasting on a slice of bread baked with ground-up seaweed could help burn more calories than half an hour on a treadmill, according to new research.”

I love seaweed salad so perhaps seaweed toast is the way to go for me! Haha.

“More than one-tenth of the federal government’s most critical IT systems that deliver services to Canadians are so old they may be on the verge of “total failure,” according to an internal government review.”

“Facebook is responding to reports of employers requesting access to the profiles of potential or current employees, asking for user names and passwords to access private accounts. In a statement released Friday, chief privacy officer Erin Egan said Facebook will fight to stop any company asking for private user information and warns users to keep their login information confidential.”

“Facebook is trying to expand its trademark rights over the word “book” by adding the claim to a newly revised version of its “Statement of Rights and Responsibilities,” the agreement all users implicitly consent to by using or accessing Facebook… ‘You will not use our copyrights or trademarks (including Facebook, the Facebook and F Logos, FB, Face, Poke, Wall and 32665), or any confusingly similar marks, without our written permission.'”

“On March 23, 2011, Takei put up his fan page. Now, one year later, he has nearly 1.4 million fans on his Facebook page, who regularly like, share, and comment on his near endless stream of posts, videos and geeky pictures.”

Cool read. George Takei is awesome! I don’t “like” him on Facebook (yet?) but I frequently see friends re-post/share stuff he’s posted and it’s always great content!

“Every 3.5 seconds, someone in America loses a cell phone. And more often than not, it happens in a coffee shop, a new study says. All those absentminded moments add up to $30 billion in annual losses, the report, from mobile security company LookOut claims. And after cafes, the most common places people abandon their handsets are bars and offices.”

If we were just a little more mindful think of how much money we’d be saving!

“People with higher incomes and more education tend to have higher debt, a new survey by Statistics Canada shows. Statistics Canada said the higher debt numbers for those with higher income and education correspond to lenders’ assessments of their ability to repay the money. British Columbia was second only to Alberta for the highest debt; in B.C. the mean is $155,500, while in Alberta it’s $157,700.”

“The average cost of a wedding in the United States last year was $27,021 (U.S.), with costs topping $65,000 (U.S.) in New York… The venue, dress, ring, photographer, planner and florist form the main expenses, but many niggling details drive up costs astronomically: think guest favours, rehearsal dinner, bridesmaids shoes and stationary for invites.”

All ever so expensive.

“Hollywood director James Cameron has plunged nearly 11km (seven miles) down to the deepest place in the ocean, the Mariana Trench in the western Pacific. He made the descent alone in a prototype submarine called “Deepsea Challenger”, taking around two hours to reach the bottom. His craft is kitted out with cameras and lights so he can film the deep. This is only the second manned expedition to the ocean’s deepest depths – the first took place in 1960.”

“Those of us who are sick of vampire love triangles can breathe easy – with The Hunger Games shattering box office records, it appears the cultural zeitgeist has a new non-Twilight champion. The games have begun and this weekend’s premiere has made a killing, first smashing records as the all-time highest grossing non-sequel midnight screening ever. It’s now amongst the list of one of the best opening days ever at an estimated $68.25 million.”

“Welcome to BioWare, a crown jewel among a quietly booming Canadian video game industry and the force behind Mass Effect 3, the first smash-hit game of the year. North American consumers snatched up a reported 900,000 copies on its March 6 release, a figure staff say typically doubles when worldwide sales are factored in… BioWare and its 400 or so Canadian employees epitomize the success story several provinces – including Ontario, British Columbia and Quebec – are chasing with a series of tax incentives to diversify Canada’s economy. By its own estimates, the game industry directly employs 15,700 people, rakes in $1.7-billion in annual sales and is projected to grow 17 per cent over the next two years. Mass Effect 3’s success will help drive the growth.”

“The necessity of carrying more of scarce, high quality resources may have prompted human beings to adapt to walking upright, a study reveals.”

“Reebok has withdrawn a controversial ad campaign telling gym visitors to cheat on their girlfriend rather than on their workout.”

“Secret Service cat practices for the moment he will eventually have to take a snowball for you.” 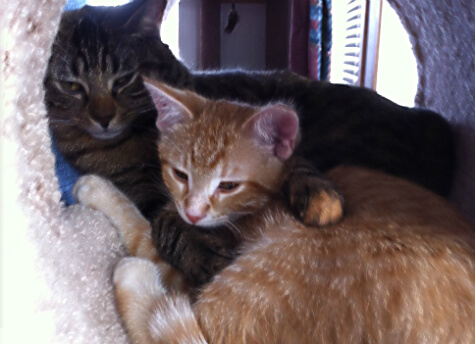 Always wrapped around one another :)

Linda Hoang is a Canadian blogger based in Edmonton, Alberta, who writes about travel, food lifestyle and pet topics. She's also a seasoned social media/digital strategist with a journalism background. Linda loves exploring the world with her husband Mike, eating their way through cities, supporting local businesses, and photographing Instagrammable Walls. She is the founder of the Edmonton International Cat Festival and a fur-mom to two cats and two dogs.
PrevPreviousReview: The Hunger Games (Movie)
NextReview: The Mongolie GrillNext