As many of you may know, my parents own a Vietnamese restaurant in Chinatown called King Noodle House Pho Hoang. It’s located at 10615 97 St. and I will often post delicious food pictures from it on Twitter and Facebook. We’ve been at the Chinatown location for 11 years and prior to that were at a different location for probably another 10 years. We have a very loyal following (and we’re very appreciative of that) who love our pho.

But as I said, I very rarely find a restaurant with pho that’s as good as my mom’s. Pho Hoan Pasteur at 11443 Kingsway Avenue comes close (not REALLY close, I don’t think it’s better than my mother’s at all, but it’s good enough for me to recommend to others, which is very rare!!) 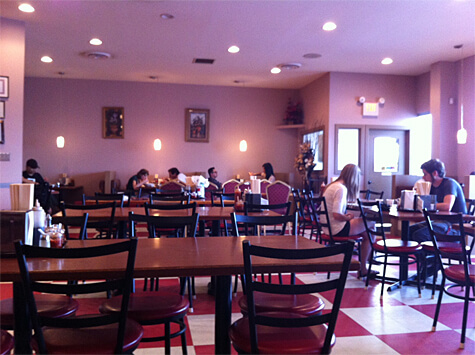 I’ve been to this restaurant with Mike before and we both thought the soup was pretty good. I didn’t blog about it before but last week I went with my family and thought it would be a good chance to write something up! 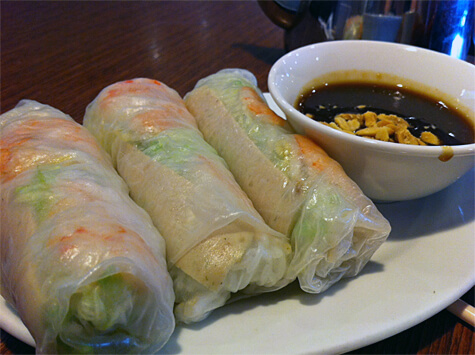 We ordered Salad Rolls to start. They were good, but not the best that I’ve had. Your usual salad rolls. 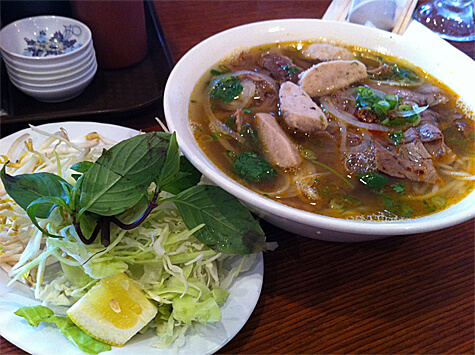 My sister-in-law and I both ordered the spicy Bun Bo Hue. The broth is so key when it comes to pho/bun bo hue, Vietnamese soup in general. There are so many Vietnamese restaurants in Edmonton that offer a ton of different rice and dry vermicelli dishes that are are good – but when it comes to their soup it’s just a big fat fail and the key reason (I think) is that it comes down to the broth. It’s just doesn’t taste right. The broth for Pho Hoan Pasteur’s Bun Bo Hue tastes right! Spicy, beefy, tasty, I slurped it all up – not a drop was left in my bowl. They pass my pho broth standards test. 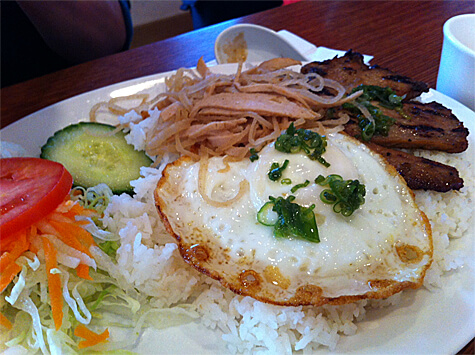 Rice with pork chop and egg from Pho Hoan Pasteur

My mom ordered the broken rice with pork chop and egg. 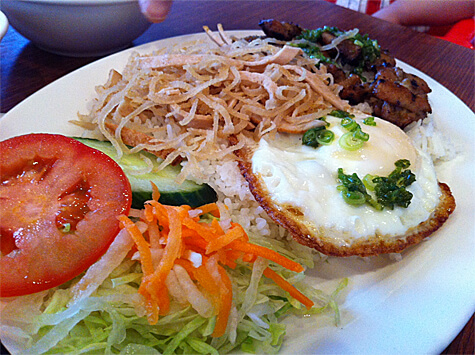 Rice with egg and chicken from Pho Hoan Pasteur

There’s not a lot to say about the rice dishes because as I wrote above – there’s a ton of Vietnamese restaurants that do rice / vermicelli dishes and they do it good. They’re not overly difficult dishes to get right. The soup/broth is. So the rice dishes at Pho Hoan Pasteur are fine – typical – good. You won’t go wrong if you’re looking for some drier dishes there. (Though quantity-wise my brother was still hungry after finishing up his rice dish, and just eyeballing it I thought it didn’t look to be enough to fill me up either).

My mom also got a three-colour bean drink which was alright. It was funny because she had ordered a different bean drink at first and our server told her she shouldn’t get it because it wasn’t that good, LOL. But he recommended the three bean drink and it turned out okay. There was a taste in the milk that my mom didn’t really like.

Mike wasn’t around for dinner this time around but last time we went he ordered the steak and beef balls soup and gobbled it all up so that’s a good soup to get if you’re not as interested in the spicy bun bo hue (and I personally prefer steak over well-done beef anyway).

The food at Pho Hoan Pasteur comes out quickly. The price points are average for Vietnamese restaurants. The service was a little lacking – we had a ton of bowls/plates piling up once we finished eating but no one came around to clear off the table (even though there were servers that walked by our table a number of times). As I said, my brother’s rice didn’t end up filling him up so he actually ordered an extra well-done pho which we also gobbled up (I was still hungry even after my soup too! My tummy is out of control, lol). The broth here is better than most in the city (but definitely not as good as what you’d get at King Noodle House ;))

This isn’t the ONLY Vietnamese restaurant besides my mother’s where I find the broth acceptable – I will hopefully get around to blogging about those in the future too (though the numbers are limited).

Overall Pho Hoan Pasteur is a nice, clean restaurant with enough good food to satisfy Vietnamese soup lovers and those looking for rice or vermicelli dishes. But I still recommend you try out my mom’s soup before going anywhere else! ;)

So have you been to Pho Hoan Pasteur?! What did you think?

Linda Hoang is a Canadian blogger based in Edmonton, Alberta, who writes about travel, food, lifestyle and pet topics. She's also a seasoned social media/digital strategist with a journalism background, the founder of the Edmonton International Cat Festival and co-founder of Stop Race Based Hate, an online anti-racism education tool. Linda loves exploring the world with her partner Mike, eating their way through cities, supporting local businesses, and photographing Instagrammable Walls. Linda is a fur-mom to two cats and two dogs.
PrevPreviousClicks of the Day: August 24, 25, 26 2012 Weekend Edition!
NextClicks of the Day: Monday, August 27, 2012 Edition!Next