“An Edmonton cyclist clipped the side mirror of a parked pickup on Whyte Avenue, lost control and was crushed under the rear wheels of a passing cement truck on Monday. “He was killed instantly,” said Acting Insp. Erik Johnson, who described the accident as one of the worst he has seen in 16 years with the police service. “There was a full load of cement in that truck,” Johnson said “The cement truck driver had no idea he had even run over a cyclist. Some witnesses had to flag him down and tell him to stop.”

Wow. What a sad, sad story.

“The family of Zaidee Jensen — a visually impaired mother of two who fell off of an LRT platform at the University Station and died — isn’t blaming the transit system she frequented. However, they’re concerned the accident could have been avoided if the station was better equipped for low vision and blind transit riders. “There’s got to be a safer way to do it,” said her father, Albert Potter Monday. “Even a simple handrail along the wall could have avoided this.” Since Jensen’s death Friday, the family has been pleading with ETS to allow them to view the station’s video surveillance tapes — a request the city fulfilled Monday afternoon.”

Also a sad story. I hope some safety changes do come out of this.

“A day after the Madhatter Music Festival in the Leduc area ended – in defiance of warnings from Leduc County – festival organizers could face thousands of dollars in fines. On Monday, Leduc County said significant resources were tied up over the weekend – as county peace officers and RCMP had to monitor activities at the festival while organizers defied a stop order and safety warning from the county last week.”

Was it worth it, organizers?

“As the province prepares to implement the final phase of the tough impaired driving law it says will cut deaths and injuries on Alberta’s roads, government numbers released Monday show about 1,000 Albertans have had their operators’ licences suspended for an indefinite period under the new rules already in place. Since Canada Day, when the first phase of the legislation took effect, at least 994 Alberta drivers whose breath sample gave a reading above the Criminal Code blood alcohol concentration limit of .08 received an immediate licence suspension that remains in place until their criminal charges are resolved.”

“Nearly half of Canadians are ready to put money away with their Tax-Free Savings Accounts, but a new survey finds that doesn’t necessarily mean they’re using them. A poll from CIBC (TSX:CM), released Monday, found that 47 per cent of respondents say they’ve set up a TFSA, but only half of the respondents with a TFSA account have made a contribution this year. The tax-free accounts have existed for nearly five years, though numerous polls have found that Canadians didn’t necessarily understand how they work or simply had decided not to open one.”

This is true. I have one but have not been putting any money into it. My non-tax-free-savings-account on the other hand is getting a lot of action, lol.

“Don’t close the pool just yet. Fall is just around the corner, there have been some cooler days lately, but summer weather will drag into September in most of Canada, says the Weather Network.”

“Canadians mailed fewer packages through Canada Post in the second quarter, eroding results across most of the Crown corporation’s operations, while its courier business Purolator got a boost partly from more orders sent by e-commerce retailers. Noting that the “decline of mail is not something that’s going to rebound,” the Canada Post Group of Companies said that reality would weigh on any new labour agreement with its workers.”

Ah to watch snail mail disappear before our eyes.

“The calm of summer was shattered Monday with the reopening of Quebec universities, where some classes were disrupted as protesters disobeyed the back-to-school law. The chaotic scenes came in the final stretch of an election campaign where the student unrest has mostly faded into a non-issue.”

“Some 10,000 Syrian refugees are waiting on the Syrian side of the border as Turkey rushes to build more camps to accommodate the influx and carries out more stringent security checks on the newcomers, Turkish officials said Monday. The developments underscore the growing toll Syria’s civil war is having on neighbouring countries, several of which have seen a massive flow of Syrians trying to escape the conflict which activists estimate has killed more than 20,000 people since March of last year.”

“The centre of Tropical Storm Isaac’s projected path is heading directly for New Orleans, nearly seven years to the day after Hurricane Katrina devastated the city. Forecasters said Isaac would intensify into a Category 1 hurricane later – far less powerful than Katrina in 2005. However, residents shuddered and President Barack Obama declared a state of emergency in Louisiana, making funding available for emergency activities. Isaac, which left 24 dead in Haiti and the Dominican Republic over the weekend, has shifted course from Tampa, Florida, where the Republican National Convention pushed back its start in case the storm passed closer to the gulfside city.”

Hopefully it causes very minimal damage and no deaths (in America anyway, since there’s already casualties in Haiti/Dominican. Sad.)

“If legislation is approved, the Australian state would become the first western jurisdiction to ban smoking among an entire generation. As it is now, the island community has Australia’s highest smoking rates, with one in four young people lighting up. The proposal calls for those born after the year 2000 to never be allowed to buy a pack of smokes.”

What an interesting idea.

“Teens who routinely smoke marijuana risk a long-term drop in their IQ, a new study suggests. The researchers didn’t find the same IQ decline for people who became frequent users of pot after 18. Although experts said the new findings are not definitive, they fit with earlier signs that the drug is especially harmful to the developing brain.”

Falls into the duh/I told you so, category, lol.

“Regular-sized folks with pudgy bellies are at greater risk of death than fully obese people, new research has found. People who are of a regular weight but have all their fat concentrated in their bellies have a higher risk of cardiovascular death than any other body type, according to Mayo Clinic research presented Monday at the European Society of Cardiology Congress in Munich. The pot-bellied also have a higher risk of death from all other causes, even when factoring in factors such as age, sex, race, smoking, diabetes and hypertension.”

“Hewlett-Packard Co. used to be known as a place where innovative thinkers flocked to work on great ideas that opened new frontiers in technology. These days, HP is looking behind the times. Coming off a five-year stretch of miscalculations, HP is in such desperate need of a reboot that many investors have written off its chances of a comeback.”

Hard to compete with the almighty Apple.

“In a filing earlier today, picked up by Bloomberg, Apple said it wants to extend an earlier injunction on Samsung’s Wi-Fi-only 10.1-inch Galaxy Tab 10.1 tablet to encompass the cellular version as well. Apple cites the jury verdict from last week, which found the Wi-Fi version of that tablet to infringe on three of Apple’s “feature” (i.e., software) patents. The 4G version of the tablet was also on the verdict form, but the jury didn’t find that it infringed any of Apple’s design (i.e., hardware) patents.”

Man, lol. You kind of feel bad for Samsung.

“The Arctic has lost more sea ice this year than at any time since satellite records began in 1979, Nasa says. Scientists involved in the calculations say it is part of a fundamental change. What is more, sea ice normally reaches its low point in September so it is thought likely that this year’s melt will continue to grow.”

I feel so sad for the polar bears. :(

“Hooded warblers used to be one of Canada’s rarest birds. Fifteen years ago, there were believed to be about 100 breeding pairs in the country. But the hoodies’ fortunes have improved – dramatically. The population is now estimated to be between 1,000 and 2,000 adult hooded warblers in Canada, and wildlife experts are recommending the hooded warbler be dropped from the list of 650 species at risk in Canada.”

“Using a method called cloud seeding, scientists at the University of Leeds say they have discovered a way to weaken hurricanes, subsequently alleviating some of the destructive effects these storms have on the Earth. By controlling the clouds from which the storms are formed, researchers say they might even be able to reduce a hurricane’s intensity by an entire category. The idea is that hurricanes form over warm tropical waters, acquiring energy from the surface of the sea. By cooling that surface down, hurricanes wouldn’t be able to garner as much strength.”

Interesting! (I worry that our messing around with Mother Nature will result in even more catastrophic weather events though… lol).

“A British artist will perform swimming pool acrobatics in the world’s first underwater wheelchair this week in London. Sue Austin, a wheelchair-bound artist, invented and helped create the prototype and she’ll be demonstrating what it can do at the London 2012 Festival Wednesday through Saturday.”

“A series of new videos from Japan of 10 (!!) corgi puppies have overloaded our cute circuits this Monday morning. The videos show the dogs, running, swarming the camera, chilling, playing and just generally being adorable.” 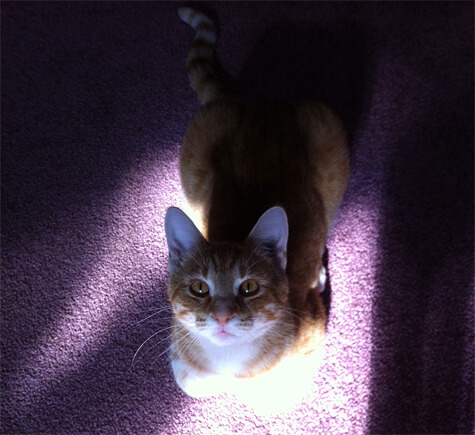 Loki watching as I do morning yoga! Curious kitty.