“In only a few days, drivers who blow between those two numbers the first time will have a suspended license and their vehicles seized for three days, a second offence will lead to a 15 day license suspension, 7 day vehicle seizure and the driver will be required to take a special course called “Planning Ahead”.”

“On Sunday morning, dozens of civilians had to be rescued from the LRT – after an unknown chemical was released. It was all part of a training exercise for three departments – the Edmonton Police Service, Edmonton Fire Rescue and Alberta Health Services. All three responded to the staged scenario, the release of a chemical agent on the LRT. The training exercise took place at the Macdonald LRT Yard in northeast Edmonton – and involved about 60 civilians who volunteered to play ‘victims’.”

“A series of three-hour tours were held Sunday in northeast Edmonton, with the goal of showing Edmontonians where local food is grown. The bus tours were put on by the Greater Edmonton Alliance and Live Local – and more than 400 people hopped on the buses, to see farmland within the city limits.”

Very cool! If they do it again on a day that I didn’t already have plans and am not working … I would like to check it out.

Just keeps getting bigger & better! Sad to say I personally did not partake in as much Fringing this year as I wanted to.

“The recent drowning of a Quebec bride has prompted one photographer to caution newlyweds about modelling their wedding outfits near moving water. Maria Pantazopoulos drowned last Friday after her wedding dress became heavy with water and she was swept away near Dorwin Falls in Rawdon, about an hour north of Montreal. The 30-year-old Laval woman is believed to have been participating in a “Trash the Dress” photo shoot, a wedding photography trend in which brides destroy their gowns in a symbolic final send-off for the garment.”

“Row upon row of bloodied bodies wrapped in colorful blankets laid out on a mosque floor in a Damascus suburb. Long narrow graves tightly packed with dozens of victims. Nestled among them, two babies were wrapped in a single blood-soaked blanket, a yellow pacifier dangling beside them from a palm frond. Evidence mounted on Sunday of a new massacre in Syria’s deepening civil war, with activists reporting a killing spree by government forces after they seized the suburb of Daraya from rebel control three days ago. Reports of the death toll ranged from more than 300 to as many as 600.”

“Increasingly, Chicago is gaining a reputation as the city of drive-by shootings. This weekend seven were shot dead and 24 others were sprayed with bullets in the windy city. In a continuing spate of shootings, at least seven people died this weekend and dozens more have been wounded in the past few days.”

“Venezuelan firefighters struggled on Sunday to put out a blaze at the country’s biggest refinery sparked by an explosion that killed 41 people in one of the global oil industry’s deadliest accidents. Officials at the 645,000 barrel-per-day Amuay refinery are trying to stop the fire still raging at two storage tanks from spreading to other nearby fuel storage facilities. That would delay Amuay’s restart beyond the current estimate of two days. But the incident is likely to have little impact on world fuel prices because the OPEC nation can use its existing stocks to supply its domestic market and maintain exports.”

“Neil Armstrong, the first man to walk on the moon, has died at the age of 82. The former astronaut was recovering from a recent heart surgery. A statement from his family said he died following complications resulting from cardiovascular procedures. Armstrong commanded the Apollo 11 spacecraft that landed on the moon on July 20, 1969. After setting foot on the surface of the moon, he spoke the famous words, “That’s one small step for man, one giant leap for mankind,” a moment that was broadcast around the world to an estimated 600 million people.”

May he rest in peace.

“An Edmonton doctor says half of all babies born in Canada are still unplanned, more than a decade after a national organization called for an overhaul in the way Canadians deal with issues around contraception. Sarah Halleran, an obstetrician and gynecologist, says unplanned pregnancies are the result of either an improperly used contraceptive, or, in many cases, no contraceptive at all, indicating an ongoing problem with misinformation or lack of education.”

“According to a report released by the Center for Disease Control this week, getting a tattoo can be more dangerous for your health than you might think. Last fall when a cluster of skin infections in upstate New York led back to one tattoo artist, local public health officials reacted normally, investigating the artist’s hygiene practices. They found that all of his equipment and methods were sanitary, but the nationally distributed ink he had been using on patrons, even in unopened bottles, was not. Soon after, similar investigations in Colorado, Washington and Iowa turned up harmful strains of bacteria in three other brands of tattoo ink. According to research reported Wednesday in the New England Journal of Medicine, at least 22 skin infections across the four states were linked to contaminated ink.”

My parents wanted to put me in piano or guitar lessons but I was never interested, lol.

“Facebook is presently in the process of disabling millions of “fake” accounts, many of which are pet accounts that people have created for their beloved furry friends. The news of the tens of millions of “fake” accounts was reported the first week of August. Pet profiles, along with business profiles, are considered to be “user-misclassified” accounts; this comprises 2.4 percent of the overall illegitimate, or “fake”, account category. What this means is soon, if not already disabled, it’ll be bye-bye to Fluffy’s and Fido’s profiles.”

“A new smartphone accessory made from the same material as NASA spacecraft claims to reduce antenna radiation and improve performance. But how do we know if it works? It’s still unclear as to exactly how bad the problem of cellphone radiation really is – but recent studies show that just 50 minutes of cell phone use affects brain activity in the area of brain closest to the phone, and the World Health Organization have reclassified cell phone radiation as “potentially carcinogenic for humans.” A company called Pong, however, claim that they’ve developed a solution, in the form of a phone case.”

“After 21 hours of deliberation, a nine-person jury has sided with Apple on a majority of its patent infringement claims against Samsung Electronics. The jury also awarded Apple more than $1 billion in damages.”

“Many analysts said the decision could spell danger for competitors who, like Samsung, use Google Inc.’s Android operating system to power their cellphones. “I am sure this is going to put a damper on Android’s growth,” New York-based Isi Group analyst Brian Marshall said, “It hurts the franchise.””

“Leading water scientists have issued one of the sternest warnings yet about global food supplies, saying that the world’s population may have to switch almost completely to a vegetarian diet over the next 40 years to avoid catastrophic shortages. Humans derive about 20% of their protein from animal-based products now, but this may need to drop to just 5% to feed the extra 2 billion people expected to be alive by 2050, according to research by some of the world’s leading water scientists.”

I would NOT be okay with a completely vegetarian diet… #meatever #meatlover Oh dear.

“Wheelchair rugby player Garett Hickling will carry the flag for Canada at the Paralympic opening ceremonies in London.
The 41-year-old from Kelowna, B.C., is a five-time Paralympian and three-time Paralympic medallist.”

“TOTO, Japan’s leading toilet makers, have recently released an eco-friendly motorbike. Why is a toilet manufacturer dabbling in motorbikes is a question you may have just very reasonably asked yourself? Well, there’s an explanation for that. It seems the archipelago’s demand for more environmentally sustainable vehicles has inspired the company to unveil a three-wheel 250cc motorcycle that runs on crap. And not just any kind of crap either. The engine is powered by biofuel from converted livestock poop and household wastewater pumped in from Kobe City and Shika-o Town in Hokkaido.”

“Filmed off the coasts of Indonesia, a blue ribbon eel.” 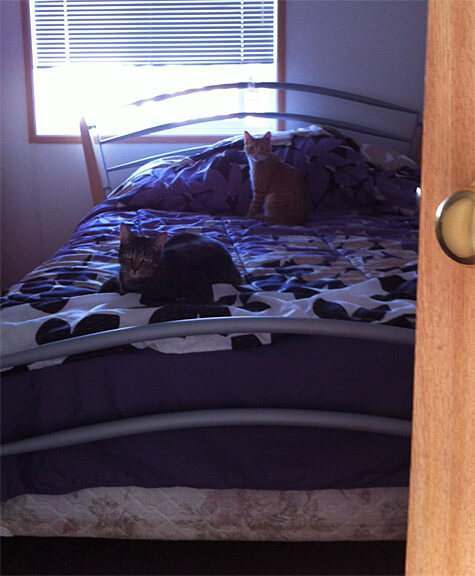 Walking down the hallway and spotted the kitties in the guest bedroom, lol.

Linda Hoang is a Canadian blogger based in Edmonton, Alberta, who writes about travel, food, lifestyle and pet topics. She's also a seasoned social media/digital strategist with a journalism background, the founder of the Edmonton International Cat Festival and co-founder of Stop Race Based Hate, an online anti-racism education tool. Linda loves exploring the world with her partner Mike, eating their way through cities, supporting local businesses, and photographing Instagrammable Walls. Linda is a fur-mom to two cats and two dogs.
PrevPreviousClicks of the Day: Thursday, August 23, 2012 Edition!
NextReview: Pho Hoan PasteurNext