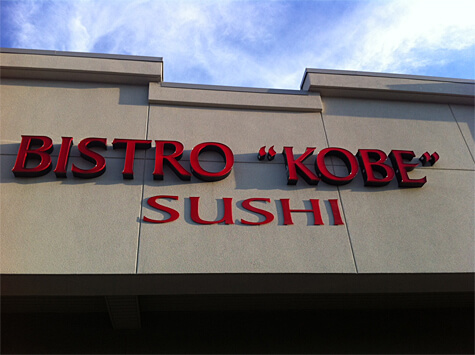 On Saturday Mike and I tried out Kobe Japanese Bistro at 6655 178 Street (in Callingwood) for the first time. We had driven by it awhile back and I had wanted to give it a try but at that time we chose Rice Bowl Deluxe. Then I had seen a few positive Twitter reviews for Kobe which made me want to try it even more. I actually wanted to go to an old favourite of mine and Mike’s – Mt. Fuji (which I still haven’t gotten around to writing a review about, whoops!) but it’s so far north and out of the way for us now that we settled on Kobe. 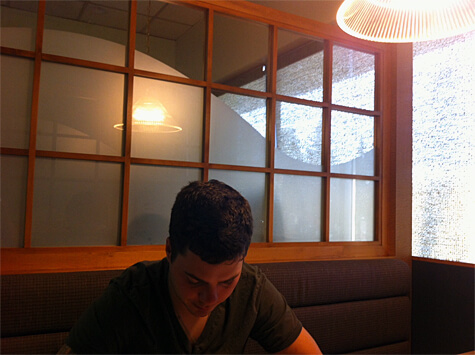 We were seated in a cozy booth by an extremely pleasant woman. She was a wonderful server – very attentive with the biggest smile on her face that would not go away! 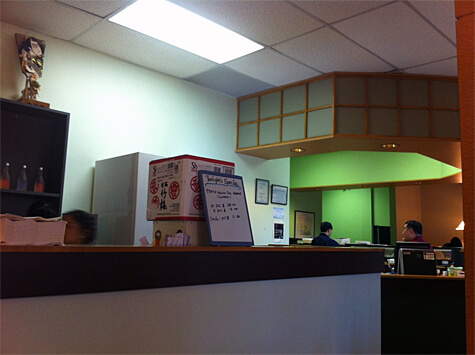 The place feels small and is separated in such a way that you really don’t see much beyond where you’re sitting. 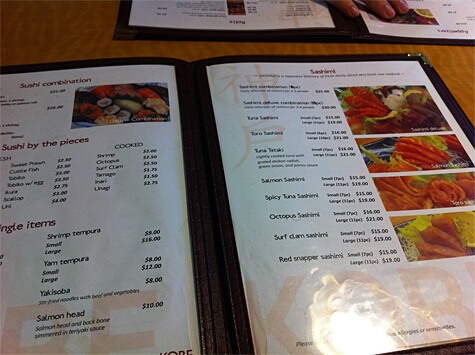 There’s lots of options for Japanese cuisine at Kobe. Mike doesn’t really enjoy the raw fish or sushi rolls so his draw when we go to Japanese restaurants is in the beef and rice dishes (which they had). Mike and I decided to splurge for the meal tonight – instead of just getting a dish for him and a dish for me we also got additional rolls to share and an appetizer to start (lol, that’s our “splurging” – we are frugal. That’s probably normal for most people). 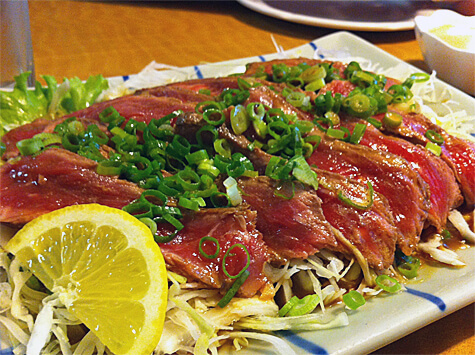 We ordered the Beef Tataki ($12) which is thin strips of rare steak covered with green onions and a Ponzu sauce. I love beef tataki but we normally never order it when we’re at Japanese restaurants because of the additional cost. I’m happy we tried it here – absolutely delicious. It came on a bed of what I believe to be some kind of lettuce/cabbage – also drenched in the Ponzu sauce – that added to the great taste of the dish. 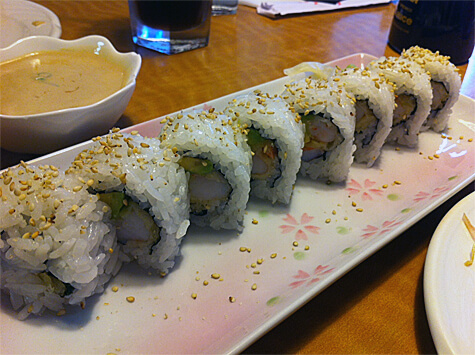 We also ordered the Dynamite Rolls to share ($7.50 for 8 tempura shrimp avocado and mayo rolls). I’m normally not a rolls person myself – I prefer the sashimi – so typically I don’t order rolls but Mike wanted to, inspired by delicious tempura batter crab/shrimp rolls we had at Sushi Garden awhile back. Unfortunately these rolls didn’t contain as much tempura batter and overall we didn’t think it tasted that great – especially when it came to our other dishes, the rolls definitely took a backseat. 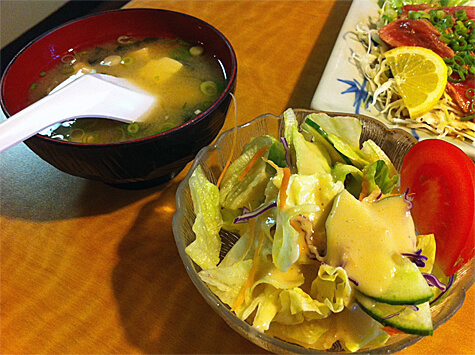 For my main dish I ordered the Kobe dinner special which ranges from $17 to $22 depending on what options you choose. All the dinners come with your choice of chicken or beef (I chose chicken) and tempura (yum) and then you can choose between california rolls, assorted sushi or *drum roll* SASHIMI! Of course I went for the sashimi – which cost the most, at $22. The dinner combo comes with Miso soup and a salad to start. The miso soup was one of the better ones I’ve had (yay!), the salad was just okay. 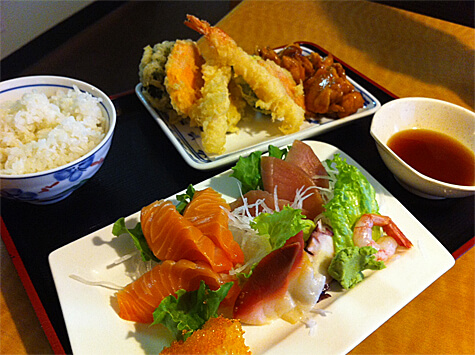 The chicken was great, rice was great, tempura was great (some of the biggest vegetables I’ve ever had in terms of tempura before) and the sashimi was amazing. So fresh. So slimey. (Slimey is a good thing when it comes to raw fish, lol). The tuna just flaked off instantly in my mouth it was delicious. 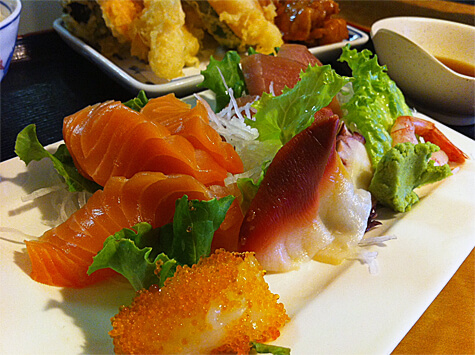 Close up of the delicious sashimi at Kobe Japanese Bistro

I had to take a close up of the sashimi. It’s my favourite after all. Melt-in-your-mouth. 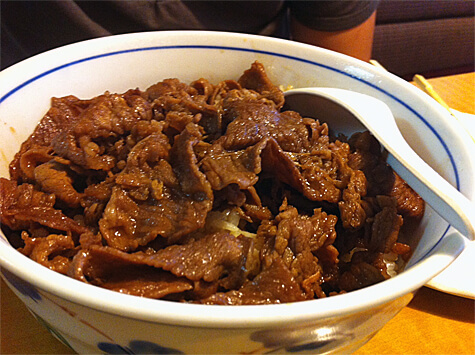 And for Mike’s main dish he ordered the Beef Teriyaki Donburi rice bowl – which is just $9! Less than the beef tataki even – what a great deal. Mike LOVED his rice bowl. It came packed with rice and beef in some sort of sauce that we can’t name. Mike also ordered a side of sesame sauce to accompany the bowl because he loooves sesame sauce with beef and rice. He said Kobe’s beef and rice may be better than Mt. Fuji’s – I still think Mt. Fuji’s tastes a bit better. Either way the beef bowl is great especially considering how little it costs too.

Overall we really enjoyed our experience at Kobe. Fair prices, great quality, great quantity, great service. It was too much food for us – I had to take home a lot of my dinner (which is fine because that made for an extremely good next-day lunch). Our total came out to just under $60 – which is more than what our dinners typically cost but that’s because we normally don’t order appetizers. I consider it great value because I also had leftover lunch out of it and we thought the food was great (besides the rolls, but we’re roll-picky).

If you’re in the west end then Kobe is definitely a Japanese spot worth your time. Further away in the city – you should still try it out. I’d like to try it for lunch one day as well – as Japanese restaurants prices usually drop significantly during the lunch hour. I still love my Mt. Fuji and Mikado, etc., but Kobe is definitely up there now!

So have you been to Kobe?! What did you think??

Linda Hoang is a Canadian blogger based in Edmonton, Alberta, who writes about travel, food lifestyle and pet topics. She's also a seasoned social media/digital strategist with a journalism background. Linda loves exploring the world with her husband Mike, eating their way through cities, supporting local businesses, and photographing Instagrammable Walls. She is the founder of the Edmonton International Cat Festival and a fur-mom to two cats and two dogs.
PrevPreviousNews Online: Edmonton father, son complete cross-country ride to raise MS awareness
NextClicks of the Day: Monday, August 20 2012 Edition!Next