“Two weeks before students were set to hit the books again, dozens of students at a local private high school will have to find new schools. On Monday, the Concordia High School Board of Governors announced the school is now closed permanently.”

Can you imagine being those students?! Scrambling to get to a new high school now…

“The Rossdale community is sharply divided over the prospect of a new fire station. In the first meeting after city hall’s summer break Monday, council’s Community Services Committee discussed re-activating Rossdale Fire Station 21 near Telus Field. The station could reopen as a limited service fire hall with five staff members, and would be used primarily for river rescue services and as backup for downtown units. After hearing contrasting perspectives from nine residents, the committee passed a motion to move ahead with a site location study and environmental assessment.”

“The federal government is looking to hire a collection agency to recoup millions of dollars in unpaid fines. A letter of interest posted on a government contracting website shows 22,313 people owed close to $129 million in unpaid fines as of March 31, 2011.”

“Canadians’ love for their mobile gadgets may be on the wane, suggests new research, which found that the average time they spend staring at those glowing screens is on the decline. A new survey from Ipsos Reid found that Canadians are still using their smartphones, tablets and e-readers with the same frequency as they were when the polling firm asked in 2011. However, they are spending less time on average using these gadgets.”

“The Bank of Canada apologized Monday for the removal of an image of an “Asian-looking” woman from its design for new $100 bank notes. Governor Mark Carney said in a statement the bank will review the design process that led to the image being removed. “I apologize to those who were offended — the Bank’s handling of this issue did not meet the standards Canadians justifiably expect of us,” he said.”

“There’s a widespread view that Mondays are linked with misery, depression and a generally bleak outlook on life. In fact, suffering from ‘a case of the Mondays’ is a typical description for someone with an especially grumpy disposition. But a new study says there’s simply no truth to the notion that we have a special hate on for Mondays — in fact we dislike Tuesdays, Wednesdays and Thursdays just as much, researchers found.”

Lol so only when it’s Friday – when we’re one day away from the precious weekend – are we happy.

“More women are getting the word that they may have breasts too dense for mammograms to give a good picture. What’s not so clear is what to make of that information. New York this summer became the fourth state to require that women be told if they have dense breasts when they get the results of a mammogram. That’s because women whose breast tissue is very dense have a greater risk of developing breast cancer than women whose breasts contain more fatty tissue. Plus, it can be harder for mammograms to spot a possible tumour.”

“Does marriage drive women to drink? A study suggests the answer is yes. It found married women drink more than single or divorced women — and married men drink less than their single, divorced or widowed counterparts.”

“Researchers in England have created a prototype surveillance device that can be used to spy on people inside buildings and behind walls by tracking the frequency changes as Wi-Fi signals generated by wireless routers and access points bounce off people as they move around.”

“A new survey of Canadians in their 50s found that 53 per cent of those polled said they plan to continue working after retiring in their 60s, in many cases to supplement their income.”

“After three weeks of listening to technology experts, patent professionals and company executives debate the complicated legal claims of Apple Corp. and Samsung Electronics Co., a jury of nine men and women are set to decide one of the biggest technology disputes in history. Apple is demanding Samsung pay it $2.5 billion and pull its most popular smartphones and computer tablets from the U.S. market after accusing the South Korean company of “ripping off” its iPhone and iPad technology. Samsung, in turn, is demanding Apple pay it $399 million for allegedly using Samsung’s technology without proper payments in making the iconic iPhone and iPad.”

“There is no sign, however, of the rusty-patched bumble bee that Colla has been searching for all summer. It used to be one of the most common bees in southern Ontario and Quebec but is now one of the rarest. In fact, the rusty-patched bumble bee, known to scientists as Bombus affinis, is the first bee in North America to be officially declared an endangered species. Federal Environment Minister Peter Kent added the bee to Canada’s list this summer and federal wildlife advisers warn the bee appears to be on the brink of extinction. Climate change, pesticides, habitat loss and pathogens are suspects, but no one can say with certainty why it has vanished.”

“Start your week right with this hilarious compilation of dogs who JUST. CAN’T. STOP. GIGGLING. From belly-tickles to a new toy, there’s a lot that sends these pooches to haha-heaven.”

“Oh, Perez Hilton, you’ve done it again. The colorful, brash celebrity kingmaker has found a new star, albeit a tiny one, in an utterly adorable, ridiculously tiny kitten. In this video, posted on Hilton’s spinoff site Teddy Hilton, a white and tawny kitten crawls along a pink bedspread making a meowing sound so high-pitched it’s more of a squeak than anything else.” 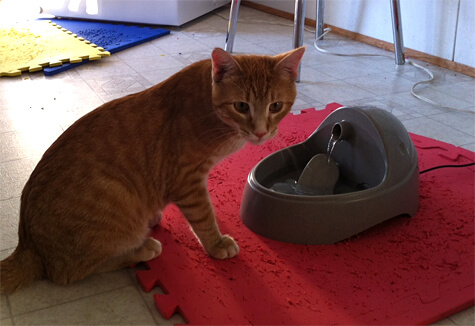 We got Thor & Loki a cat water fountain!!! It was on the lower-end, there were really elaborate ones that we may have to invest in as a Christmas present. They love getting their water from the tap so we figured having this constant flowing water would be of interest to them. :) #SPOILED

Linda Hoang is a Canadian blogger based in Edmonton, Alberta, who writes about travel, food, lifestyle and pet topics. She's also a seasoned social media/digital strategist with a journalism background, the founder of the Edmonton International Cat Festival and co-founder of Stop Race Based Hate, an online anti-racism education tool. Linda loves exploring the world with her partner Mike, eating their way through cities, supporting local businesses, and photographing Instagrammable Walls. Linda is a fur-mom to two cats and two dogs.
PrevPreviousReview: Kobe Japanese Bistro
NextSocial Media Column: Tweet your way to a new jobNext