On Monday I went to the Free Press Bistro (at 10014 104 St downtown) with my friend Megan! I hadn’t seen Megan in months (far too long!) and when we end up having our catch up dinners we usually end up choosing a local restaurant to eat at! (Last time I ate with Megan was at the Blue Plate Diner, another lovely local restaurant!)

The Free Press is really cute and actually a lot bigger than I expected. This is only one half of it: 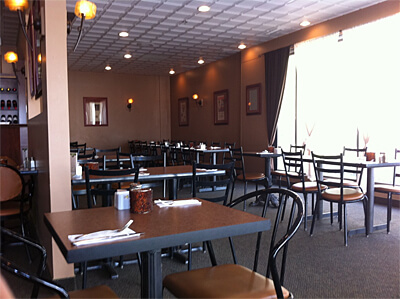 It was empty when we came in but filled up quite a bit with couples and those going solo the longer we stayed.

The Free Press menu is really neat. It’s designed like a newspaper with sections “Leading Stories,” “The Garden Section,” and “Hot off the Panini Press.” Very cute and clever! 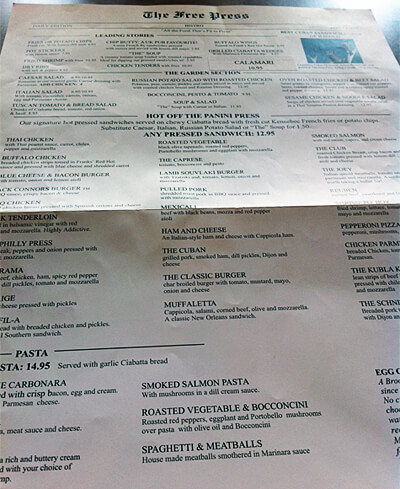 I was really excited to see that one of their sides included potato chips! I love, love, love chips at restaurants! Megan had been to the Free Press before, so was pondering some pasta, but I knew I wanted to stick with their speciality panini pressed sandwiches. There were some pretty interesting sandwich options but I narrowed it down to fairly safe choices – The Club, Pepperoni Pizza, and the Chicken Parmesan panini (with potato chips as the side). 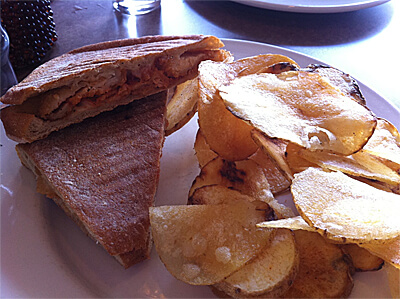 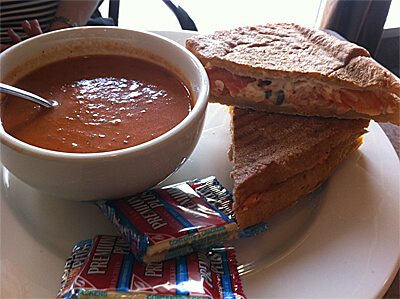 At $12.95 a panini + side, the meal was very inexpensive and very delicious! I don’t have paninis often, in fact, this might have been the first panini I’ve had in years, so I might not be the best judge of panini-character, but I do know I enjoyed it and it certainly won’t be years before I have another panini again! :) The chips were good but not anything special. I am in love with the cactus cut chips at Boston Pizza, so I didn’t think Free Press’ were as good as those. Still they were as good as you can ask for in chips.

Normally I don’t get desserts when I go out to eat either, but Megan and I thought that ordering dessert would be the perfect cherry on top of a really pleasant trip to this local eatery! 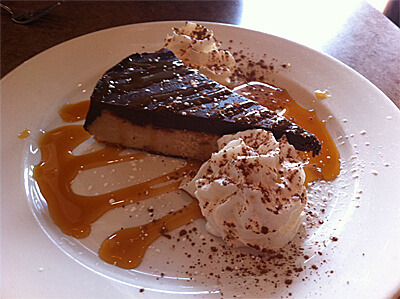 We chose the Peanut Butter Banana Chocolate Cheesecake. I’m not really a fan of peanut butter and I thought the cheesecake was a bit too rich, but despite that, it was a yummy dessert. Megan – who has no qualms with peanut butter – certainly loved it! :)

Overall I really have no complaints about the Free Press Bistro! With good conversations, good food and good service, the Free Press Bistro left me happy and full. The food came out super speedy, our server was very nice, and my Bistro date was wonderful too! You couldn’t really go wrong! :) Happy to cross another local restaurant off my Eat Local list.

Have you been to the Free Press? What did you think!

Linda Hoang is a Canadian blogger based in Edmonton, Alberta, who writes about travel, food, lifestyle and pet topics. She's also a seasoned social media/digital strategist with a journalism background, the founder of the Edmonton International Cat Festival and co-founder of Stop Race Based Hate, an online anti-racism education tool. Linda loves exploring the world with her partner Mike, eating their way through cities, supporting local businesses, and photographing Instagrammable Walls. Linda is a fur-mom to two cats and two dogs.
PrevPreviousClicks of the Day: Tuesday May 17, 2011 Edition!
NextClicks of the Day: Wednesday May 18, 2011 Edition!Next