(disclaimer: content fluctuates depending on how busy my day was, lol.)

This was the news that was all atwitter on my Twitter feed today! (Beyond Slave Lake news). I think it makes a lot of sense, as VUE and SEE’s owner says. ““There’s already been quite a bit of discussion in the community – they don’t like having to choose between the two publications, so there’s quite a bit of pressure to bring this to resolution in the next couple of weeks.” I’ve always thought the two were so freaking similar! I wonder what it will be called when it’s merged! :)

Crazy! All this time my father’s been nagging me to stop using my cell phone so much because the signals it emits will give me cancer or something or other, and here’s scientific evidence that the signals are responsible for killing off bees. I wonder what other animals – if studied – are being affected too?

I love that “unfollow” and “link shortener” are officially recognized terms in traditional media now!

Ugh. I hate cheaters. Not that I had an overwhelming amount of respect for Schwarzenegger to begin with (I didn’t really have any opinion on him, really), but now I have none! I don’t understand why people cheat and being a celebrity doesn’t make cheating any more acceptable. I don’t know how he could have lived with himself all this time, LYING! Poor Maria Shriver.

So sad! Pandas are so adorable and it’s so sad that the world’s OLDEST one is gone now. Definitely doesn’t help the endangered panda bear numbers…

I miss Lady Gaga’s older songs. ‘Born This Way,’ ‘Judas,’ ‘Hair,’ and now these two new songs are not to my liking at all. As someone who thought that her Monster Ball concert was one of the best concerts I’ve ever been to – it saddens me to see her recent songs all suck.

An interesting read! In this technologic day and age, with free wi-fi cropping up every which way, I don’t think it’s right that some hotels charge you for it! Get with the times, hotel businesses!

THIS IS SO COOL!!!!! Angry Birds is one of the greatest inventions in the world.

I don’t have an Android phone anymore but Mike certainly does so this is not good news. #AndroidFail #GetaniPhone!

How bizarre is this! Chinese farmers overused growth chemicals and now their watermelons are exploding. They’re feeding the watermelons to animals that we will likely consume. Ruh roh. 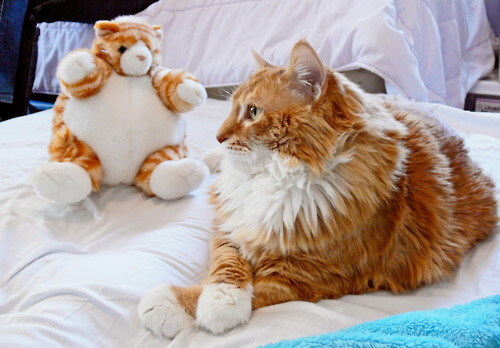 Linda Hoang is a Canadian blogger based in Edmonton, Alberta, who writes about travel, food lifestyle and pet topics. She's also a seasoned social media/digital strategist with a journalism background. Linda loves exploring the world with her husband Mike, eating their way through cities, supporting local businesses, and photographing Instagrammable Walls. She is the founder of the Edmonton International Cat Festival and a fur-mom to two cats and two dogs.
PrevPreviousClicks of the Day: Monday May 16, 2011 Edition!
NextReview: Free Press BistroNext