On Thursday, Mike and I kicked off the holiday season by visiting Rogers Place for the first time to see Cirque du Soleil’s TORUK: The First Flight! I had given away a pair of tickets earlier this month (congrats to Debbie!) and we were fortunate enough to have been invited by Bottom Line Productions to check out the show ourselves.

TORUK: The First Flight is inspired by James Cameron’s Avatar and tells the story of the Na’vi people a thousand years before humans set foot on Pandora. There’s an impending danger to the Na’vi people and the two heroes of the story must bring together five ancient amulets to save the day.  There’s a narrator who translates the Na’vi language throughout the show, which immediately sets a different kind of tone than other Cirque shows you may have seen.

I’d describe TORUK as the most “billowy” performance I’ve been to. The set billows, the costumes billow, the props billow. I tweeted that it was a billowy beauty (and I stand by that super insightful description lol) but really, TORUK is a feast for your eyes – colourful, vibrant, and gorgeous with some incredible acrobatics (that make you think ‘holy, how are they moving their bodies like that?!’), but perhaps less acrobatics and stunts than other Cirque shows.

The set is massive – stunning, and ever-changing with projections. It’s the ocean, then it’s a tropical forest, a volcano, the sky.There’s large, life-size animals (puppets) that move across the stage, and watch for the plants and flowers that pop up from the ground (reminded me a bit of whack-a-mole).

There’s a lot of rope acrobatics and aerial silk – which don’t get me wrong, is an incredible feat, but after awhile maybe felt less exhilarating. (Perhaps suffering from the ‘Marvel Effect,’ what I’ve named when every Marvel movie is so damn good that later movies start being less impressive because the standard for all is set so high). 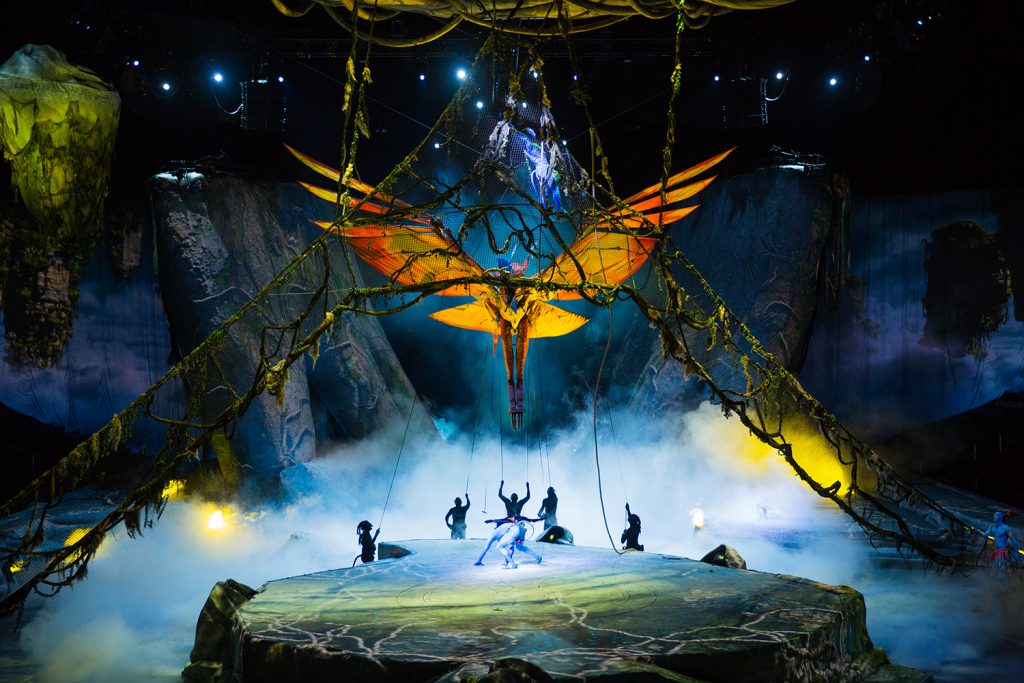 Overall, if I put TORUK to my ‘Cirque test’ – which is simply, “did I leave feeling in awe?” then yes, I did walk away with that feeling – just so impressed with what the human body can do (and what I can’t lol), feeling a bit of a sensory overload (so many colours, so much energy!) It wasn’t Mike’s favourite Cirque show (not as intense a storyline, not as much acrobatics), but it was still a great night out, totally entertaining, and a wonderful opportunity to check out the new downtown arena.

TORUK: The First Flight is in Edmonton until Dec. 26. It would be a great holiday outing for your family!

Disclaimer: I will always provide my 100% honest opinion on this blog. I received complimentary tickets to watch TORUK: The First Flight. This does not affect the opinions stated in this post. (I wouldn’t say I liked it if it didn’t!)

Linda Hoang is a Canadian blogger based in Edmonton, Alberta, who writes about travel, food, lifestyle and pet topics. She's also a seasoned social media/digital strategist with a journalism background, the founder of the Edmonton International Cat Festival and co-founder of Stop Race Based Hate, an online anti-racism education tool. Linda loves exploring the world with her partner Mike, eating their way through cities, supporting local businesses, and photographing Instagrammable Walls. Linda is a fur-mom to two cats and two dogs.
PrevPreviousReview: Daravara (124 Street)
NextReview + Giveaway: Time Escape EdmontonNext