I’ve been fortunate to have made it on some kind sort of “Edmonton escape game” list over the last two years – as new escape rooms open, I’m often invited to give the rooms a try, share my experience on this blog and run some kind of giveaway for readers. It’s been a lot of fun and means I’ve been able to try a lot of escape rooms in Edmonton!

There’s now more than 40 escape rooms (and over a dozen escape companies) and I’m still such a huge fan of the whole concept: Get locked in a themed room and work together with your friends/family/co-workers to solve a series of puzzles in order to escape the room (or complete the mission).

There’s at least two dedicated blogs reviewing escape games in Edmonton: one from my friend Lamya and her boyfriend Jason (#yeg Escape Room Round-up) and a new one I noticed recently called The Encore!

My favourite escape game companies in the city so far include GTFO (who is currently closed due to a fire, but should re-open in the new year!), Escape City and X-Realm. But I’ve enjoyed rooms at a lot of other places too.

This week I was invited to try the new-ish Time Escape Edmonton and Side Quest escape games. I’ll have a review and giveaway for Side Quest in a couple weeks, but this post is all about Time Escape!

At the end of the post, enter my giveaway for a chance to win one of three pairs of passes to try Time Escape yourself.

Time Escape is part of a franchise that began in Vancouver. It’s co-owned by – if you can believe it, current students at the University of Alberta! Amazingly entrepreneurial.

The space is located at 10939 120 Street right by The Local Omnivore (which – if you haven’t tried eating there yet – you gotta go! Delicious sandwiches). The front room is divided into a main lobby and a ‘briefing room’ / locker room, separated by a garage door. They actually pull the garage door up when the space has been booked by big groups for corporate events or parties and you can bring in your own food if you book a bigger party there too! 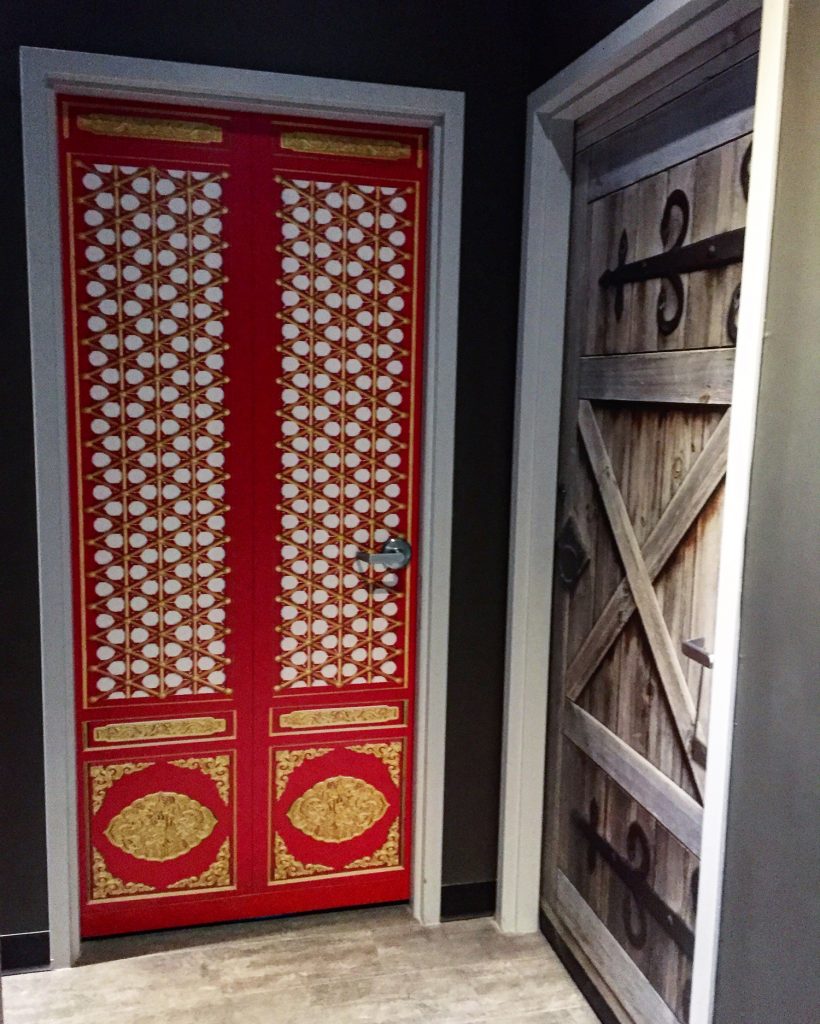 Love when the doors leading into the rooms are designed to match the room!

My group was there to try Castle Secrets but we were accidentally led into Time Warp first. That was totally cool with us because we got to see how slick the room looked!! One thing the group all loved about Time Escape was the great production value and room/set design, both for the brief moment we saw Time Warp’s first room, and for when we entered the Castle Secrets room.

Some escape games have cheaper looking props or plain-er looking wallpaper, which can quickly bring you out of the story or cheapen the overall feel of the room, but Time Warp’s set and props (that we experienced) all had a great level of polish.

I also get pretty excited when the doors or walls leading into the rooms are designed to match the theme of the room itself. It’s a good sign that a higher quality production will be waiting for you behind the doors.

It featured puzzles we hadn’t seen before (which as you can imagine would get harder to achieve after trying so many rooms) and puzzles that didn’t really involve too many locks (sometimes rooms have too many standard locks, it sort of gets repetitive). There was a great flow to the puzzles too (in some rooms you’re not sure what puzzle to do first or the result of one solved puzzle doesn’t necessarily make sense, but not the case in Castle Secrets). The music suited the overall mood and ambience of the room, and although we didn’t successfully make it out in the time we were allotted (45 minutes, using up 2 hints), we still had so much fun. 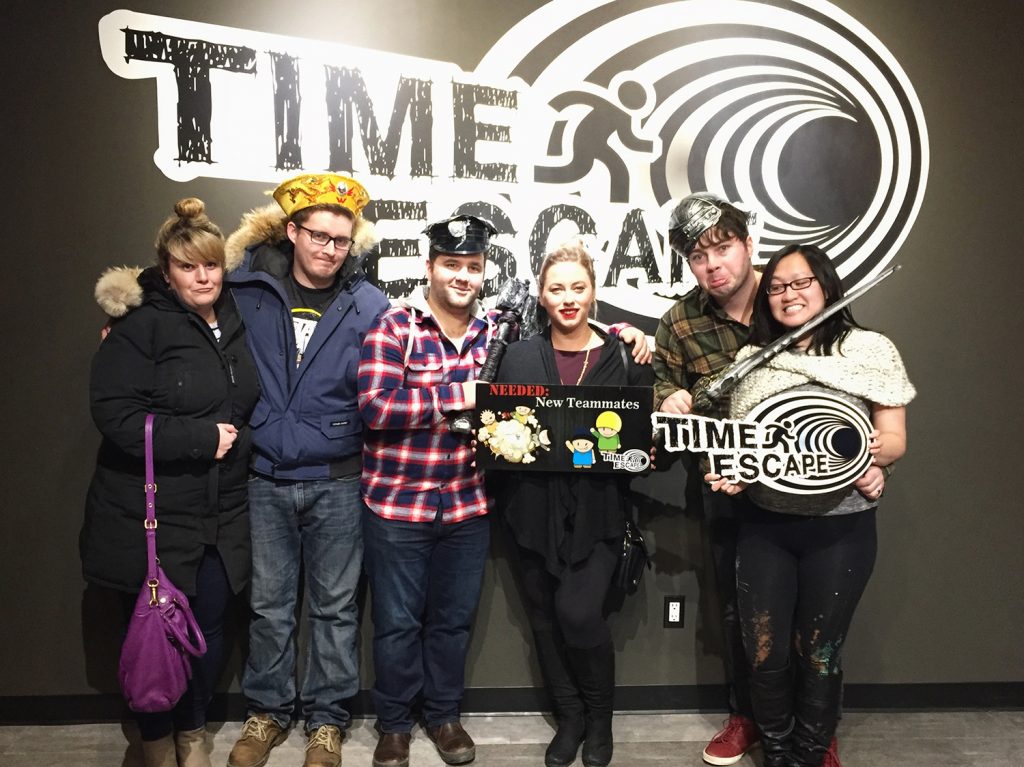 We failed to escape but had so much fun at Time Escape!

I’ve been struggling with whether 6 people is too many people for most escape rooms. Most companies will state how many people minimum and maximum should play the room (some say you can have up to 8 or even 10 players) but Mike and I have both found that if you have too many players it can take some fun out of the game because there may not be enough puzzles to keep everyone involved.

One of the worst things you can experience in an escape game is everyone crowding around the same, one puzzle (but only 1 or 2 people actually being close enough to read/hold/decipher the puzzle).

We think 4 is a great number of people for an escape game (but generally go with 6 people because we always want to introduce friends to the concept, or play again with escape game-loving friends).

Castle Secrets suggests 2-6 players. There was maybe one or two times during game play that I felt that maybe 6 was too many, but at the same time, it’s great to have more minds available to try and solve a puzzle. In Castle Secrets, each of us helped solve at least once puzzle so we were all feeling pretty good even though we didn’t make it to the end. The last puzzle before you get out of the room (the owners showed us) is really neat (something we’d never seen or done before!)

Overall, we really enjoyed Castle Secrets and are totally planning to return to try Time Warp. Also making sure we plan it so we can have a meal at The Local Omnivore next door too. (Time Escape owners actually said they’d love to work out some type of dine and play deal with the restaurant which would be wonderful).

I’d definitely recommend you give Time Escape a try! Enter below for a chance to win one of three pairs of passes.

There are a few ways you can enter for a chance to win one of three pairs of passes to Time Escape, including:

I’ll select a winner when the giveaway closes on January 8, 2017.

Disclaimer: I will always provide my 100% honest opinion on this blog. Time Escape partnered with me to run a giveaway and try a room (complimentary). This has no impact on the opinions stated in this post. (I wouldn’t say I liked it if I didn’t!)