I’ve been mulling around which “B” restaurants to try/review for this restaurant series, and had a whole lot to choose from: Bar Bricco, Ban Thai, Bua Thai, Boualouang (lots of Thai restaurants start with B!), Baba Finklestein’s, various “b”runch options, and finally landed on Brit’s Fish and Chips or Back Home Fish & Chips. On Sunday we finally found an opportunity to go – we tried Brit’s first but they were sadly closed at 8. Then we tried Back Home’s which also closed at 8. We were eating with some friends so we had to choose something! Since we were in the area, our B back-up ended up being Brewsters Pub in Oliver Square.

It’s not necessarily a hidden gem or a less travelled spot, but I did want to review it because I’ve always had a good time at Brewsters, and also it should get a review for at least the sake of sharing the story of my dad’s cool Brewster’s legacy. 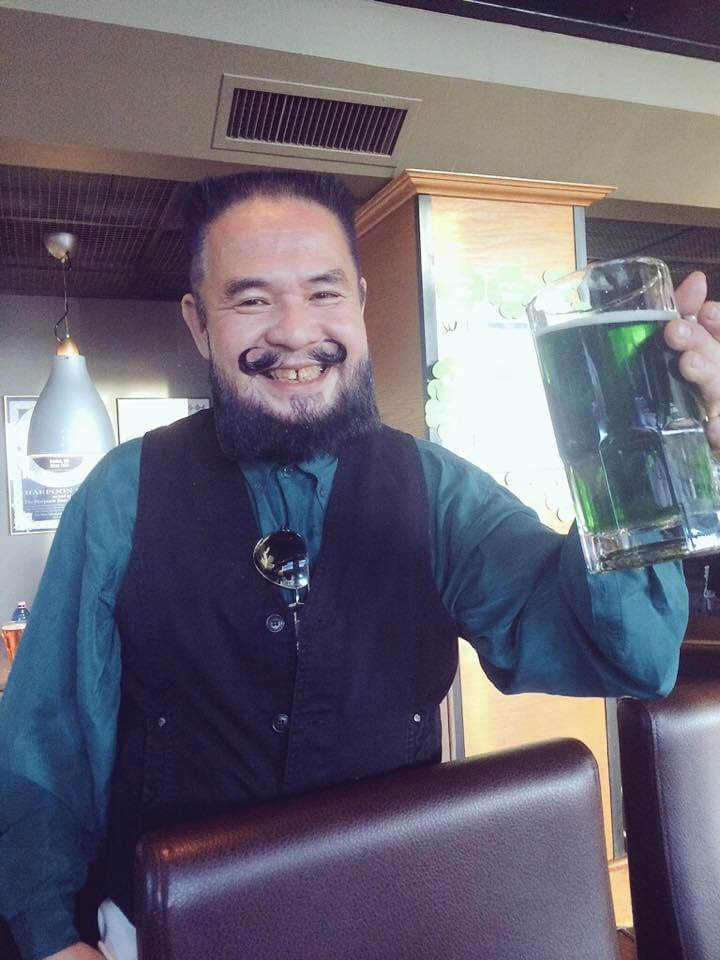 My dad is pretty well-known at Brewsters Oliver Square.

My dad has been going to Brewster’s Oliver Square every Tuesday for over a decade. All the servers know his name, his order, his order if he’s alone and his order if he’s with friends. He is on a first-name basis with the managers, chefs and brewer. On St. Patrick’s Day, when you cannot make a reservation because obviously that would be crazy, my dad just needs to head in and ask, and they say for sure, Tan!

So Brewsters has always had a special place in my family’s hearts lol. For as long as I can remember, this has been my dad’s go-to pub. The beer is excellent (I’m told, I personally dislike beer lol), and the food is quite good. Service is always solid and the atmosphere is fun. It’s also very Albertan. We recently took out-of-town guests to Brewsters because they wanted us to take them somewhere for Canadian beer and Brewsters was the first place that popped into our minds. 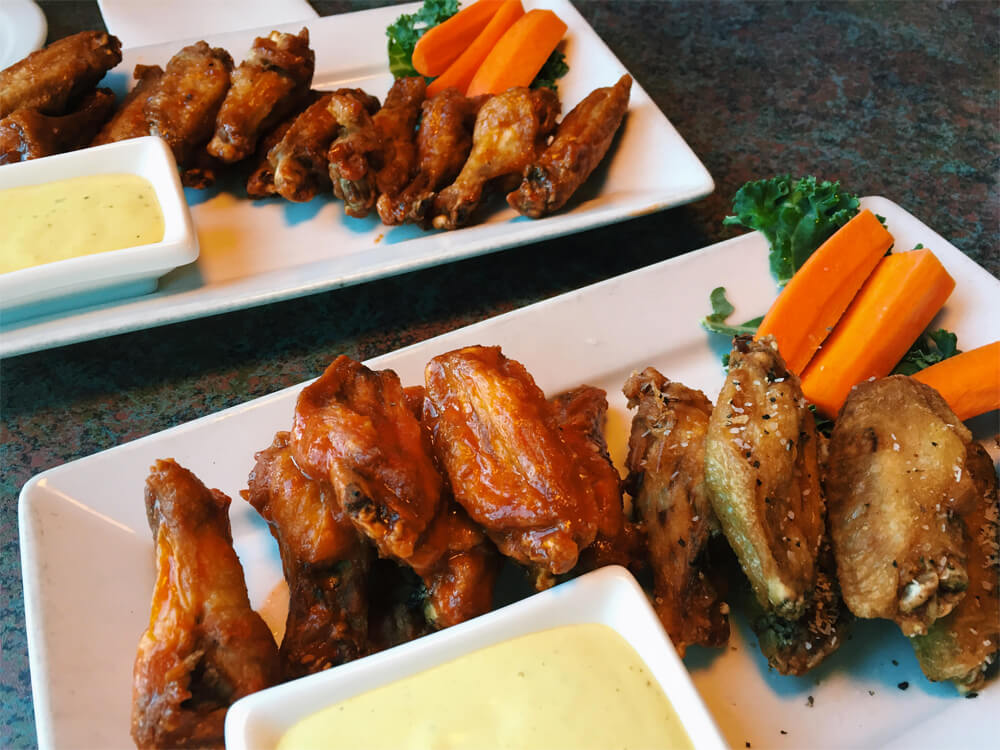 Half salt & pepper and half hot wings at Brewsters (served with carrot sticks and Hammerhead beer mustard) – $12.99

When we went this week, we had their chicken wings (normally we go on Tuesdays to get the 35 cents a wing deal) but the half and half flavour option is always nice (we like salt and pepper and hot). Their Hammerhead beer mustard is also quite tasty. I really like how Brewster’s tries to incorporate its specialty beers into its menu items. 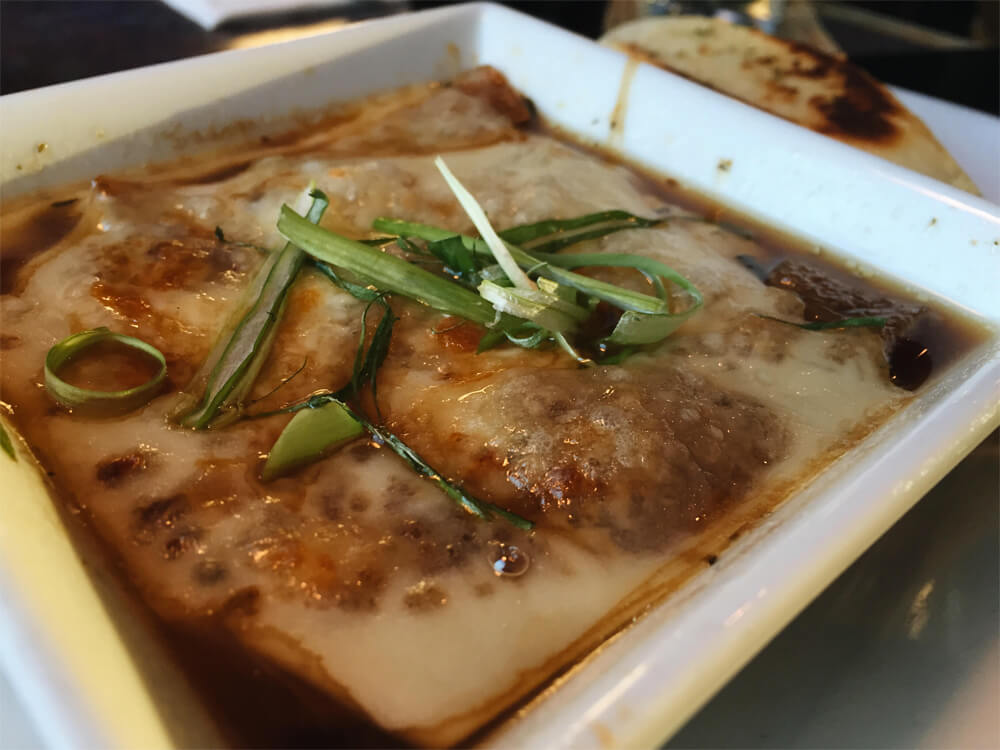 Mike wasn’t hungry so he just got their French Onion Soup, which again featured a classic Brewsters beer. 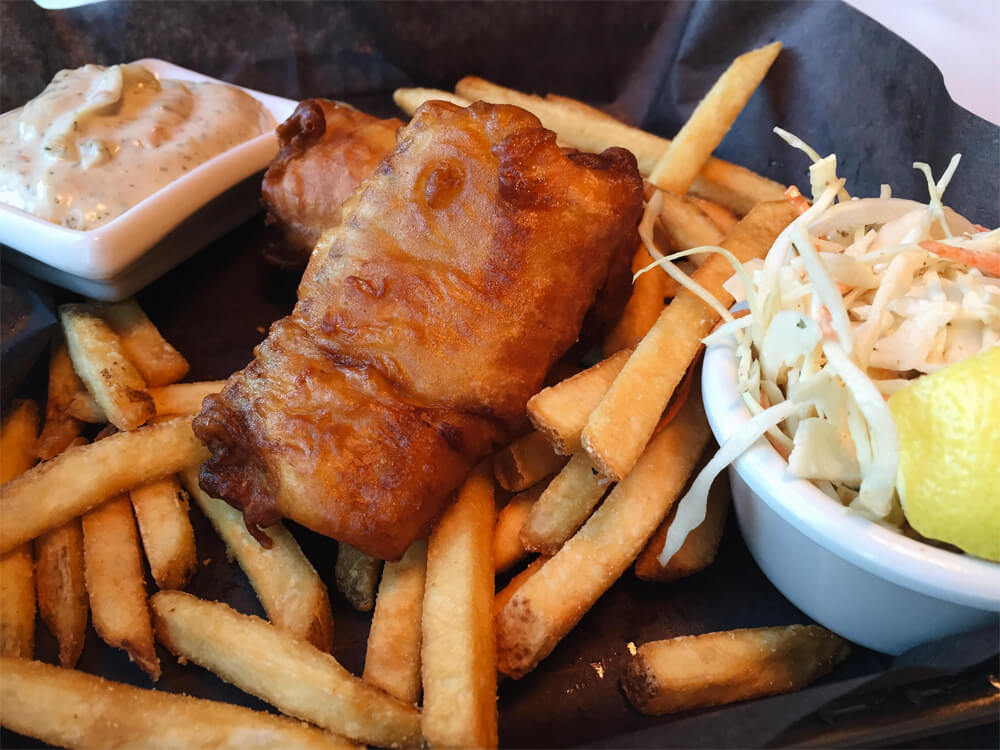 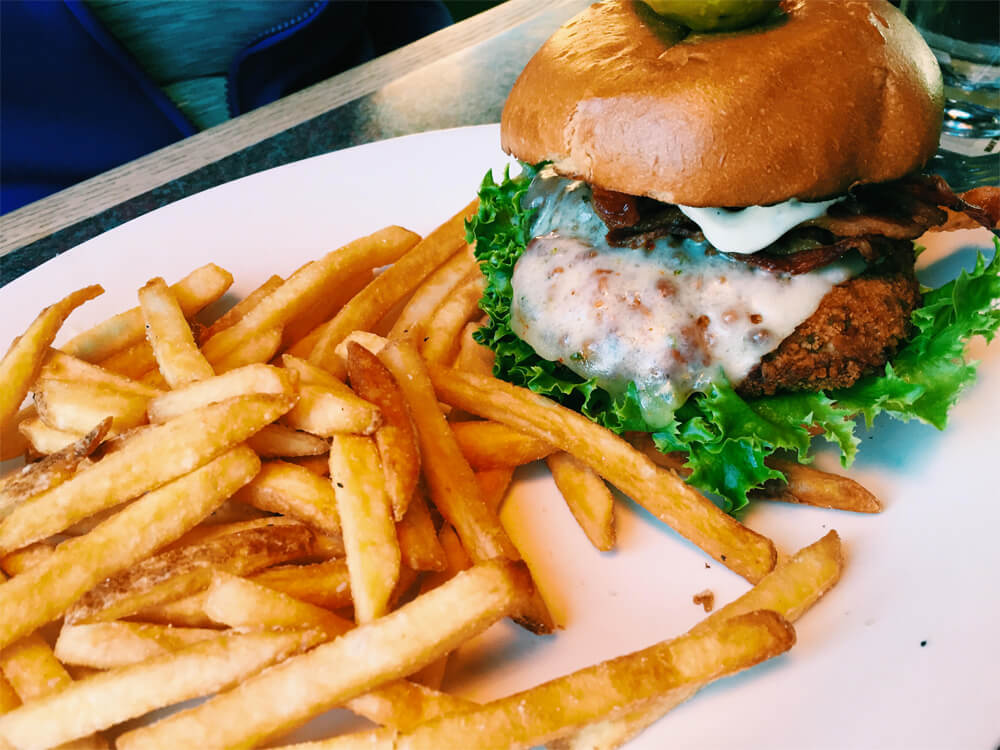 Our friends Fred and Catherine got the Fish and Chips (still lamenting over missing out on Brit’s lol), which included two pieces of Rig Pig Pale Ale, battered haddock, fries, tartar sauce, and grainy mustard slaw – $15.99 and the Crispy Chicken Ranch burger with Jalapeno panko-breaded chicken, peppercorn ranch, bacon, jalapeno Havarti, lettuce, tomato and dill pickle – $15.99. The burger was a bit on the dry side (maybe it needed more of the Brewsters beer in the cooking process!) 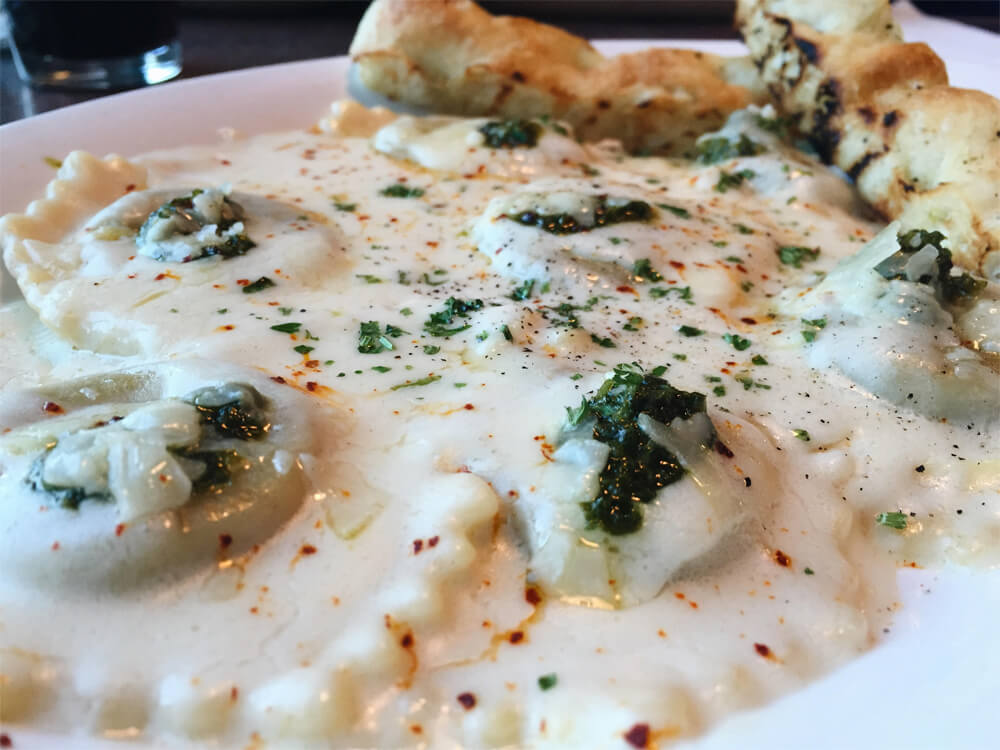 I was pretty excited to try the Braised Beef Ravioli – with white balsamic beurre blanc, chimichurri sauce, Parmesan, and grilled schiacciata bread ($17.99) It was delicious. Sign me up for beurre blanc (white butter sauce) any day of the week.

We noted that Brewster’s menu can be sort of all over the place. You’ve got so many countries represented, from their Korean BBQ Pork Chop to Gurvinder’s Butter Chicken, Carne Adovada Stew (Mexico), and Pad Thai. Despite that, the food we’ve tried has always been very consistent and tasty. It’s definitely not your typical pub food!

As I said up top, I’ve always had a good time at Brewsters. Mike and I have also gotten into the annual holiday routine of getting Brewster beer gift packs each December as a quick and easy gift for friends that feels a bit better than the usual (boring) chocolate box gift.

If you haven’t been to Brewsters yet, you should give it a try! It’s a great neighbourhood pub, with solid beer and food. Plus, if you go on a Tuesday night, you might catch my dad hanging out. (I have people regularly texting me on Tuesdays saying, “I think your dad is at Brewsters.” I’ll remember what day it is and say “Yup, that’s him!”)

I do plan on trying Brit’s Fish and Chips and reviewing that as part of this Edmonton A to Z Restaurant Series too (it also counts as “B” for “British food!”) but in the meantime, let me know what you think of Brewsters if you try it! 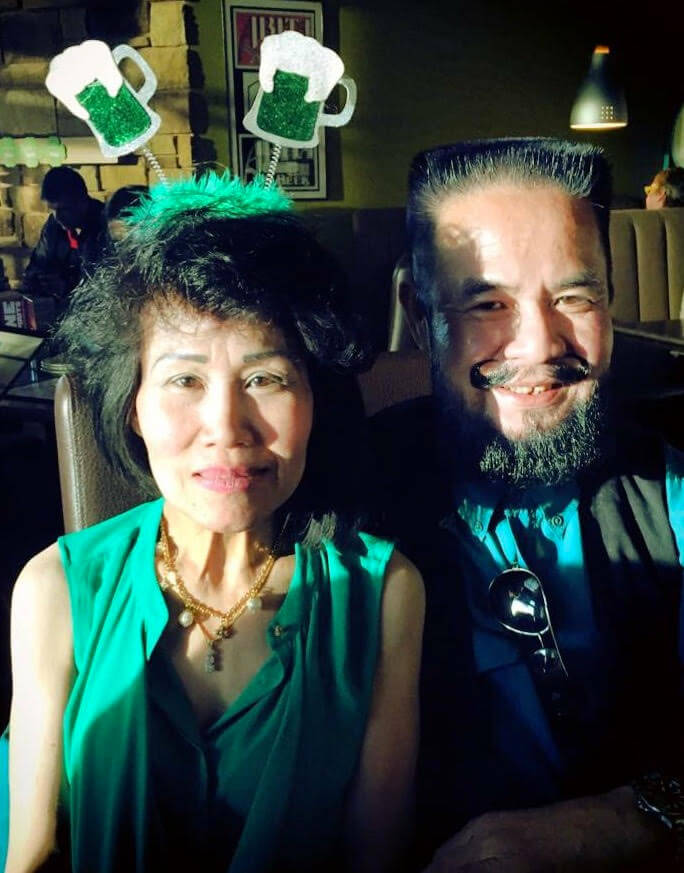 My mom and dad being cute at Brewsters on St. Patrick’s Day 2015.