UPDATE April 16, 2014: Chef Andrew Parker was investigated by the Global Edmonton Trouble Shooter after complaints about unhappy clients, unfulfilled work, etc. Since this post, he’s moved out of Edmonton and his website is no longer running. Do research + be wary! Lots of other complaints about him surfaced on social media after Julie’s story aired too.

Earlier this month, Mike and I went to a Couples Cooking Date Night with local Chef Andrew Parker! I became familiar with Chef Parker over Twitter (@chefaparker) and signed up for his newsletter through his website because I noticed he was holding interesting events every month and I am always up for attending fun and interesting events! That’s how I found out about his April 4 ‘Date Night’ Couples Cooking event. 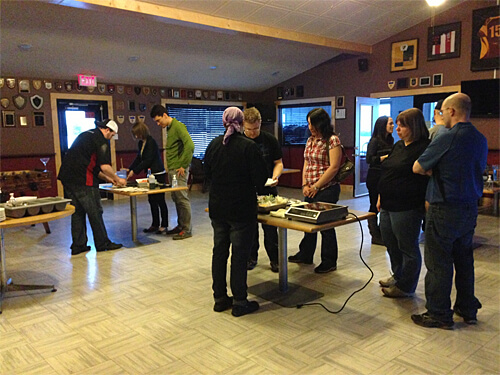 Casual set up – various Cooking Stations set up for couples.

I say Couples Cooking ‘event’ and not ‘class’ because it’s not really a comprehensive cooking class. It was a very fun, casual set-up of four different ‘stations.’ Two were cooking stations, one was a martini/cocktail station and one was a food trivia station. We were part of a group of about six couples taking in the fun! 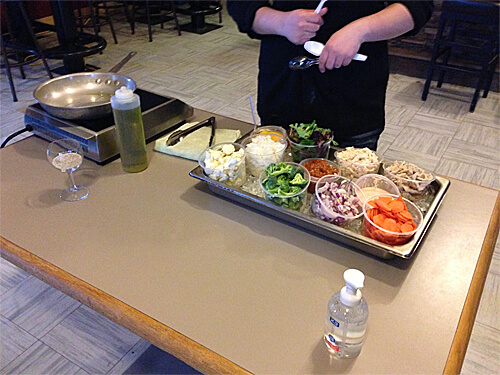 It wasn’t a super structured event. Once all the couples arrived, Chef Parker greeted each of us, explained the different stations and the casual aspect of the evening and then we were off to whichever station we wanted to go to. The stir-fry cooking station was set up in a way where could pick from: broccoli, cauliflower, carrots, chicken, pork, greens, rice, onions, and two sauces to stir-fry onto tortillas. The master plan was for each of us to stir-fry the food ourselves on a portable cooking top but there were some technical difficulties (the heat wasn’t working) so other chefs helping out that night ended up taking the food we wanted and going back into the kitchen to stir-fry it up themselves and then giving it back to us. 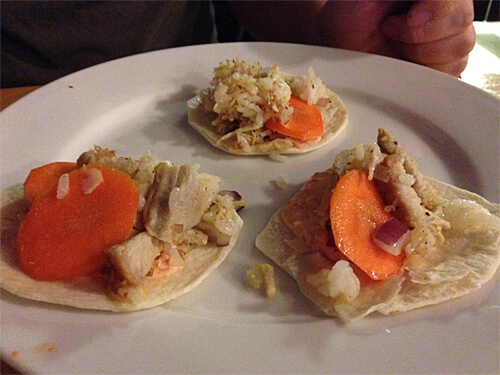 Stir-fried rice, chicken, carrots on tortillas – Mike’s creation. Mine had far more vegetables!! (But I forgot to take a picture, lol)

So that station wasn’t as hands-on as we would have liked but we don’t blame them, technical problems happen! Our stir-fry tortilla creations were still tasty. We ended up going back for seconds – I wanted thirds but held back because I didn’t want to look like a total piggy but just so everyone is clear, I definitely could have gone back for thirds. MOAR FOOD!!! Lol. But the next two stations were very hands-on! 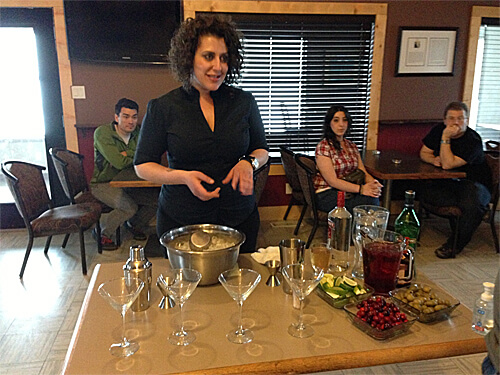 The martini/cocktail-making station was fun! I am not much of a drinker and I’m usually the designated driver when we go out but for this night I got to make my own Cosmo! 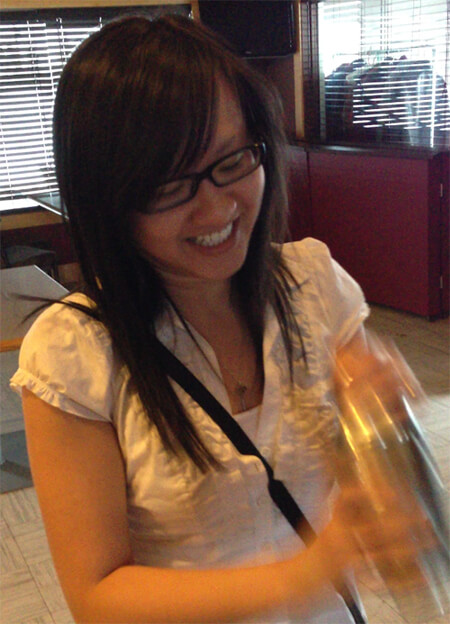 Shaking up a Cosmopolitan!

Shake, shake, shake. It tasted great! Next up… sushi! 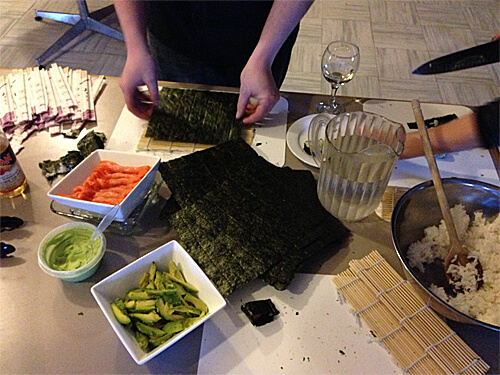 I was excited to see there was a sushi-making station at this event! I have wanted to make my own sushi for a very long time, I just haven’t gotten around to it yet, so this was an exciting first for me. The station was ‘basic’ sushi-making – with some smoked salmon, avocado and rice as fillings. Chef Parker showed us how to lay out the seaweed, pile on the filling and use the bamboo mat to roll then cut out the rolls. 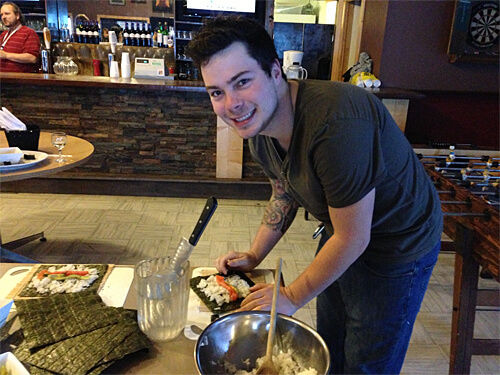 There wasn’t a lot ton of technique involved and there were other couples waiting to try their hand at the sushi-making so it was basically do-do-do and then off to eat! I still definitely want to make my own sushi at home – and feature more ingredients/fillings/etc., but this was a nice Introduction to Sushi Making for sure. 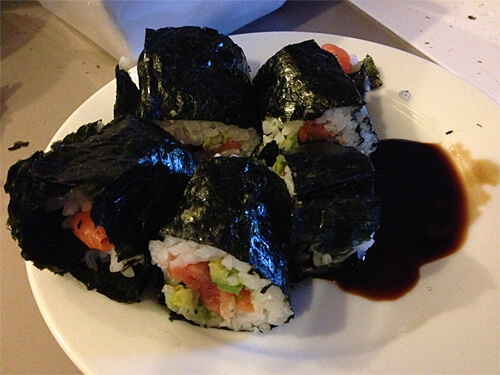 The cost of the Couples Cooking Date Night was $35/person – which I think is super affordable! It’s also a fair price for what you get. The night was very casual and there wasn’t too much technique involved at the different stations. I have seen very expensive cooking classes advertised online and I’m sure those are far more structured and go into more detail about the food, ingredients, technique, etc. But as I said, this wasn’t a cooking ‘class’ it was a cooking ‘night’/event and it’s really fun! Just don’t go in with the expectation of a crazy culinary class.

I love trying new things and attending different events and this definitely falls under the ‘different’ kind of date night category. I wouldn’t say what we ate was the most amazing thing we’ve ever eaten but it was good (as good as it would be at $35/person). You’re not paying for just the food in this kind of event – you’re paying for the atmosphere, the interactivity, the different stations, the whole package! My overall assessment is that the Couples Cooking Date Night was so fun – interactive, entertaining and tasty! It was nice to meet Chef Parker and the other chefs/servers and it was a truly memorable, unique night out. I’d recommend it for sure as a great alternative to your typical dinner and a movie date night scenario!

The next event Chef Parker is hosting is in May – a Coffee and Food Pairing event. There’s also an ‘Around the World Food and Wine Pairing’ for June and an ‘All Canadian Food and Beer BBQ’ in August. Find out more information on his website www.chefparker.ca! I can’t wait to try another event! :)

Linda Hoang is a Canadian blogger based in Edmonton, Alberta, who writes about travel, food, lifestyle and pet topics. She's also a seasoned social media/digital strategist with a journalism background, the founder of the Edmonton International Cat Festival and co-founder of Stop Race Based Hate, an online anti-racism education tool. Linda loves exploring the world with her partner Mike, eating their way through cities, supporting local businesses, and photographing Instagrammable Walls. Linda is a fur-mom to two cats and two dogs.
PrevPreviousChatting with Chris Hadfield – Canadian Space Agency Tweetup
NextRecap: Behind-the-scenes Animal Encounter at the Valley Zoo!Next