On Sunday I took Mike for his early birthday surprise at the Edmonton Valley Zoo… featuring a behind-the-scenes animal encounter!!

I had been thinking about this as a birthday gift for a year now and was so happy that it finally came to be. You see, Mike is in love with red pandas. We have only ever been to the Valley Zoo together once before and it was then (about three years ago) that I went to the bathroom and came out to see this sight: 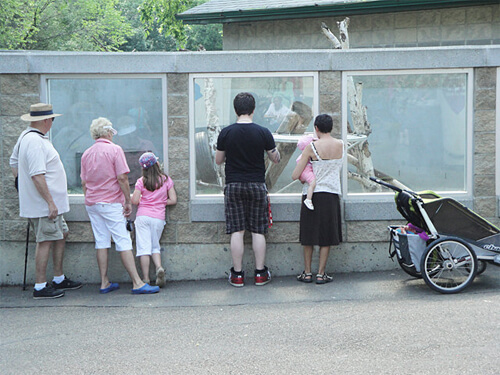 Mike pressed up against the glass watching the red pandas.

He could not stop staring at the red pandas! Shortly after, TELUS started featuring red pandas in their commercials and I’ve heard constant squeals (manly squeals of course, lol) from Mike whenever he sees a red panda. So the great idea formed – I would somehow get Mike up close and personal to play with the Valley Zoo’s red pandas! Now I wasn’t even sure if the zoo offered this kind of animal interaction and I didn’t seriously look into it until late last month so now I’ll lay out the details in case you want to spring an adorable animal session surprise on one of your loved ones! 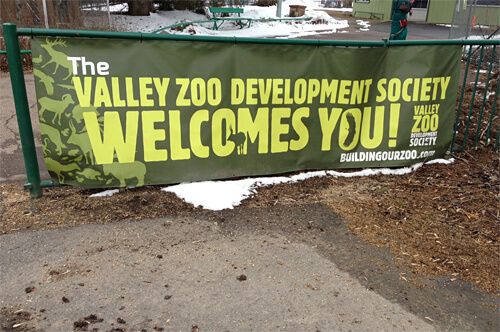 The Valley Zoo Development Society is the one that hooks you up with behind-the-scenes animal encounters!

I originally emailed the city to see if they could arrange for this birthday surprise and was told that the Valley Zoo itself doesn’t offer any kind of animal encounter but the Valley Zoo Development Society does! The Valley Zoo Development Society is a non-profit organization that raises money to improve the zoo/help the animals at the zoo. They offer something called the “ZooBuilders Program” which offers a bunch of different types of animal encounters/experiences at certain prices – costs that go to support the zoo/animals.

I went the “Foreman” route – which costs $250 to $499. (I paid the minimum amount – $250). The Foreman option is described as: Bring the whole family to the zoo for a day, or discover the fascinating facts about one of our animals at a private behind the scenes animal encounter ** (maximum 2 people/2 hours) led by one of our ZooKeepers. It says one animal but the one animal doesn’t really take two hours so they also ask for a few other animals you’re interested in going behind-the-scenes with so for my ‘wishlist’ for Mike, I chose red pandas, lemurs, otters and arctic foxes. We ended up doing red pandas, seals and lemurs (totally forgot about the otters that day, lol) and we ended up seeing one of their red foxes that they just recently took in (they’re still working to get an outdoor area for the fox).

(Other ZooBuilder program options range from $1,000 to be a ZooKeeper for a day – making regular rounds with an official zoo keeper, $1,500 to have a special animal enocunter with Lucy and she’ll paint a masterpiece for you, $5,000 to have a travelling zoo come to your office, home or school! Lots of neat options (but obviously they come at a price. But remember the price goes to help the animals!!) 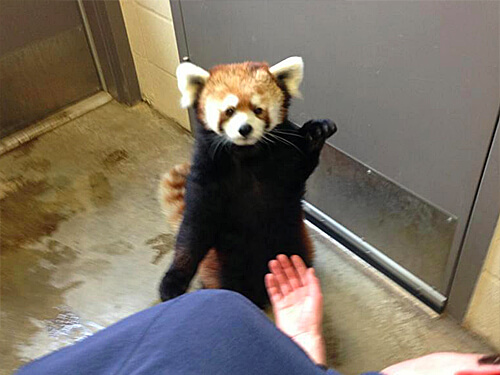 Our behind-the-scenes tour guide/zoo keeper was a great guy named Derrick. Derrick has been working at the zoo for four years, started out in the petting zoo (got to pay your dues!) and has worked his way up. He’s also studying for a biology degree at the University of Alberta and says his zoo keeper job is pretty much the best job ever. You can tell he loves the animals! 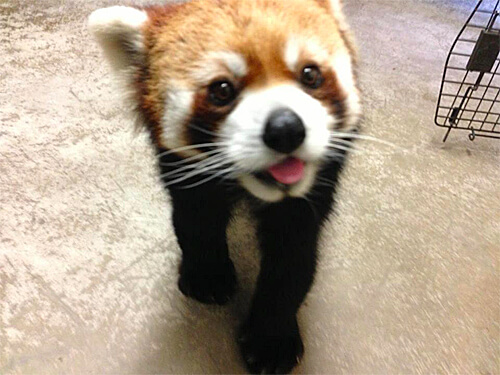 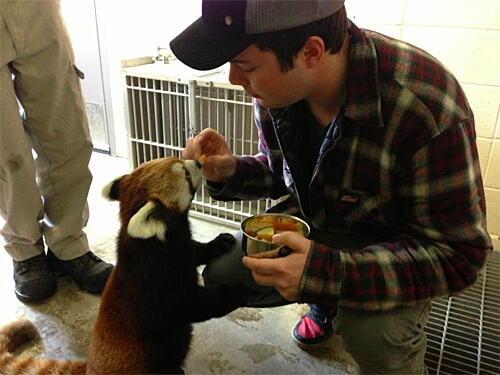 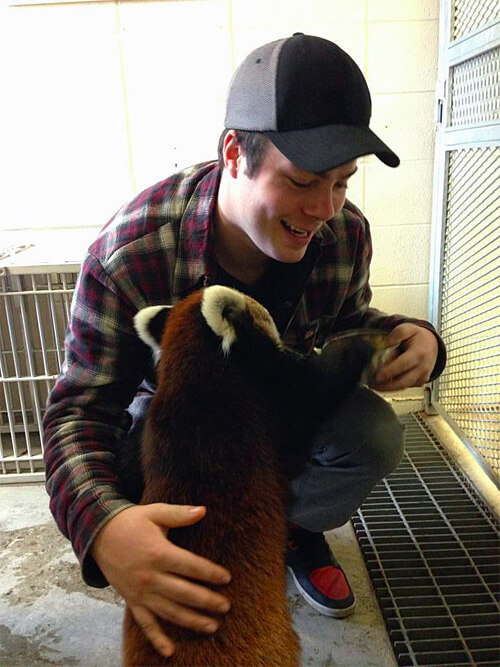 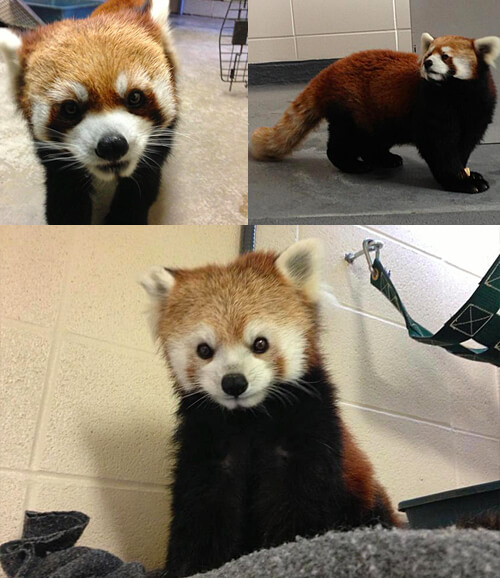 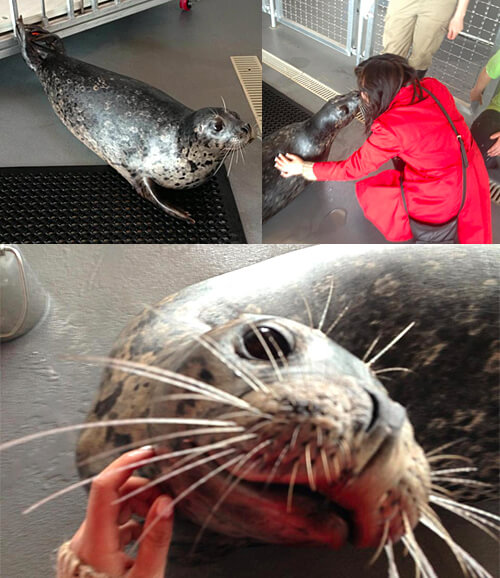 Hula the harbour seal being super affectionate (for food!) 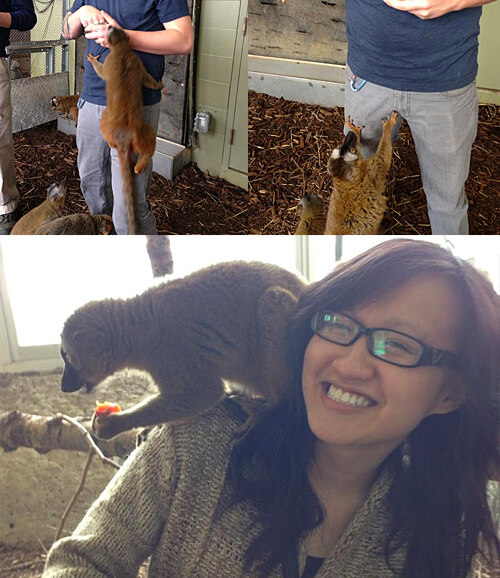 The lemurs were very touchy! So fun. 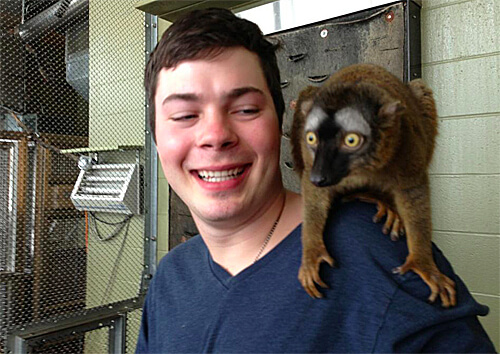 Mike hanging with a bewildered lemur. 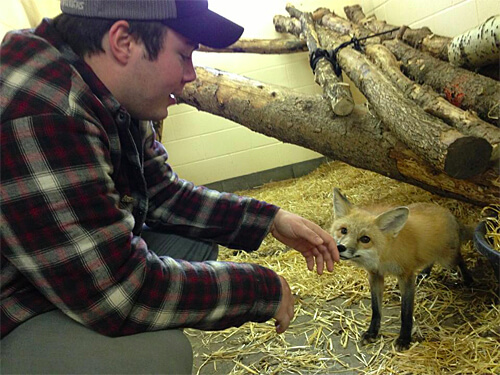 ‘Trouble’ the red fox is a bit shy. But super cute.

We learned tidbits about each of the animals and also learned that most of them are part of a breeding program – so when they do have babies a committee basically decides what zoo those animals will go to once they’re ready to leave their mamas.

You can ask your zoo keeper/tour guide whatever you want about the animals really! They have so much information to share (so much that I can’t even remember them to list here and I didn’t take notes, lol). It was also really cool because we were ‘behind-the-scenes’ – regular visitors to the zoo could see us through the glass and were obviously thinking how important and lucky we must be to be all up in the animals’ faces the way we were, lol. ;)

I am a frugal person (for certain/most aspects of life) so when I found out making this animal surprise happen for Mike’s early birthday gift was going to cost in the hundreds, I did hesitate at first but in the end I’m so glad I went for it. Mike had a great time. I had a great time. It was such a unique and special experience that you don’t hear people doing very often (even though it is available to the public and now you know, so you can do it too!) I would classify it as a once-in-a-lifetime opportunity! I mean now that we know it is do-able we’ll probably do it again in the future for our future kids or something so maybe twice-in-a-lifetime. ;) But really, how often do you get to play/touch/pet red pandas and seals? How often do you get lemurs hanging off your clothes and jumping on your shoulders? How often do you get to see the areas where zoo keepers prep and set up food to feed the animals? It was so fun and so informative and completely worth the money – especially when you know the money is also going to a charity and the charity is helping the very same animals that your visiting. Win/win! And the animals were just soooo cute!!

I don’t particularly enjoy going to zoos in general because I can get super emotional thinking about animals caged up… but the behind-the-scenes experience was actually quite helpful in that sense because you really do see that these zoo keepers LOVE these animals and are doing their best to care for them and you also learn that a lot of the animals that do end up at the zoo – would have died otherwise due to bad circumstances/health/etc. so they’re actually probably way better off being cared for in a zoo setting!

Thanks to Tammy from the Valley Zoo Development Society for helping set this up and many thanks to tour guide/zoo keeper Derrick! What an amazing animal adventure. :)

Linda Hoang is a Canadian blogger based in Edmonton, Alberta, who writes about travel, food, lifestyle and pet topics. She's also a seasoned social media/digital strategist with a journalism background, the founder of the Edmonton International Cat Festival and co-founder of Stop Race Based Hate, an online anti-racism education tool. Linda loves exploring the world with her partner Mike, eating their way through cities, supporting local businesses, and photographing Instagrammable Walls. Linda is a fur-mom to two cats and two dogs.
PrevPreviousRecap: Couples Cooking (Date Night) with Chef Andrew Parker
NextSocial Media Column: Social media being used to encourage farmersNext