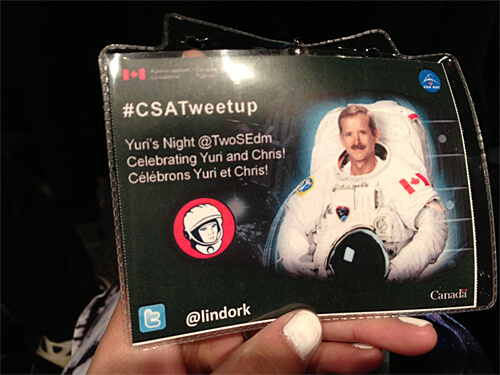 On Tuesday, April 9, I was part of a lucky group of local tweeters invited to take part in the first Canadian Space Agency Tweetup in Western Canada! Normally I would have been working but I had already taken the day off for a different event so I was able to attend this one too! (It was destiny! :D) My date was my friend @RachyLees and we were joined by hundreds of Edmonton-area students – taking part in the once-in-a-lifetime (out-of-this-world) opportunity to chat live with Commander Chris Hadfield @Cmdr_Hadfield via downlink from the International Space Station!

It was actually more about the students I think then about us, lol. We didn’t actually get a chance to ask Chris any questions but Rachel and I are pretty sure that he was waving at us specifically at one point of the 20 minute conversation, lol. 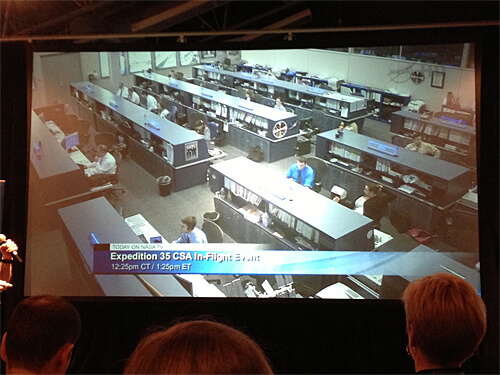 After introductions and a fun, quick lesson on the International Space Station by the Canadian Space Agency’s Mathieu Landry (the space station travels around the Earth 16 times a day at 28,000 km/h!!), we were connected live to Mission Control in Houston, Texas!! First we heard Chris’ voice and then… 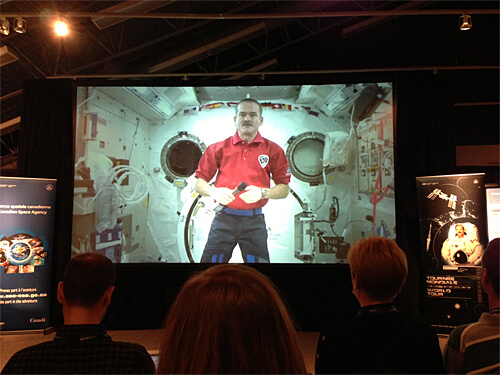 Cheers erupted as we saw our first glimpse of the first Canadian commander of the ISS! Students who had been pre-selected beforehand then got the chance to step up and ask Chris their questions, which included what he does in his spare time, what he does if he’s sick, what his goal was, what he misses most about Earth, what his biggest fear was, and more! (Some answers below)

What do you do in spare time? @cmdr_hadfield says they go to the window – “the world is more beautiful than you can imagine” #CSATweetup

What do you do in spare time? @cmdr_hadfield says they play scrabble and make music :) #csatweetup @csa_asc @twosedm

Demonstration of how to use the barf bag if you’re feeling sick in space!!! @cmdr_hadfield @twosedm #yeg #CSATweetup twitter.com/lindork/status…

One student asked how astronauts sleep in space – which got perhaps the most animated response:

I got to sit in the third row centre (amazing!!!), Rachel was in the fourth row – we arrived a little later than we wanted to due to morning car troubles so there weren’t any side-by-side seats left for us. (All good, we didn’t miss the big chat so that’s what matters!)

Our Twitter group tweeted up a storm – with all tweets tagged #CSATweetup showing up on a live tweet screen to the side of Chris’ video screen. 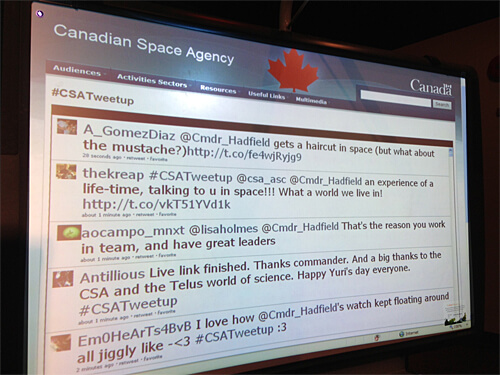 Overall it was a truly fantastic experience that I am still grinning from ear-to-ear over. Endless thank yous to the TELUS World of Science and the Canadian Space Agency for the opportunity!!!

Rachel, me, Chris ;) and Mathieu Landry with the CSA!

The tweetup was also a Yuri’s Night event.

Yuri’s Night is a celebration of space held around the world every April!

You can watch the full 20-minute chat with Commander Chris Hadfield here (thanks NASA TV!)

And you can read the social media column I did about Chris Hadfield by clicking here!

Linda Hoang is a Canadian blogger based in Edmonton, Alberta, who writes about travel, food lifestyle and pet topics. She's also a seasoned social media/digital strategist with a journalism background. Linda loves exploring the world with her husband Mike, eating their way through cities, supporting local businesses, and photographing Instagrammable Walls. She is the founder of the Edmonton International Cat Festival and a fur-mom to two cats and two dogs.
PrevPreviousSocial Media Notes – Servus ‘Community Ripple’
NextRecap: Couples Cooking (Date Night) with Chef Andrew ParkerNext