Edmonton musicians from ’60s, ’70s, set to rock and roll at reunion

Several Edmonton-area rock and roll bands from the ’60s and ’70s are set to play again in the 2011 Edmonton Rock and Roll Reunion taking place Saturday, July 9, 2011 – including members of “The Chessmen” – pictured above during the 1960s.

EDMONTON – It’s all about rock and roll, baby.

That was the state of mind for countless Edmontonians during the ’60s and ’70s and that same idea is resonating once again for about 150 people set to gather next weekend for the 2011 Edmonton Rock and Roll Reunion.

Wells, a musician from the ’60s himself, has long been putting together rock and roll reunions in the Edmonton area.

“You see the need for this as you get older,” he said with a laugh.

“You start to lose some of our friends for various reasons, cancer, natural causes, accidents everything else.”

That, Wells says, is why he tries to gather up the old crew every few years.

“We try to have a few more parties together, reunite old friends. It’s just to bring everyone together a couple more times if we can,” he said.

This year’s event will feature musicians from the bands “Cold Feet,” “Flying Saucers,” “Sons of Adam,” “The Chessmen,” and “Gary and the Pick Ups” — rock and roll bands that all performed in the Edmonton area years ago.

Wells himself plays bass for Cold Feet — a band that still performs even today, although less frequently.

“Some of the bands are still playing but a lot of them are guys who have retired and want to get together and have some fun,” he said.

The last Edmonton Rock and Roll Reunion was held in 2006 at the Winspear Centre. Prior to that the group came together to perform at Bonnie Donn Mall in 2004. And the first big event that started all of the reunions was held back in 1988/89.

Wells says this year’s event, taking place on Saturday, July 9, is sold out for the most part.

And he can understand why.

He says the event is all about the memories, old and new.

“I used to dance to all of those guys on a Friday night when we were young,” Wojdak recalls fondly.

“We used to go to Alberta Beach because there was a big dance out there. There was also a place out east called Lakeview. We all used to go to these dances, pick up girls, drive too fast, whatever a guy did back then,” he said with a chuckle.

This time around, Wojdak will actually get the chance to play with some of the musicians he used to watch on stage.

It’s his first rock and roll reunion and he says he just can’t wait.

“There’s an old song by Rick Nelson called ‘Garden Party’. The lyrics go, ‘I went to a garden party to reminisce with my old friends, a chance to share old memories and play our songs again,’ it’ll be like that,” Wojdak said. “Make new memories and add them to the old ones.”

“Hopefully everyone walks away saying, ‘Hey, that was great. Let’s do it again in five years,” Wells said. 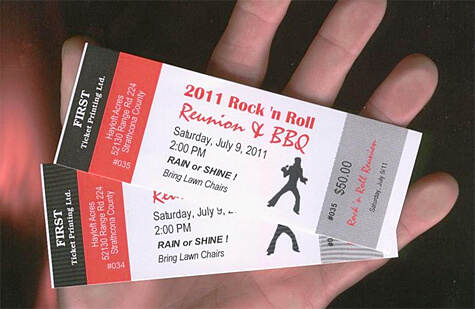 CHECK OUT THE HISTORY OF EDMONTON ROCK & ROLL BANDS (IN PHOTOS):

Linda Hoang is a Canadian blogger based in Edmonton, Alberta, who writes about travel, food, lifestyle and pet topics. She's also a seasoned social media/digital strategist with a journalism background, the founder of the Edmonton International Cat Festival and co-founder of Stop Race Based Hate, an online anti-racism education tool. Linda loves exploring the world with her partner Mike, eating their way through cities, supporting local businesses, and photographing Instagrammable Walls. Linda is a fur-mom to two cats and two dogs.
PrevPreviousClicks of the Day: Tuesday, June 28, 2011 Edition!
NextClicks of the Day: July 1,2,3 2011 Weekend Edition!Next