I thought the rainbow by the Search button was fine though but I can see why people would question no actual Google doodle!

Sheesh! Some bridges need to be re-built for sure. One in Canada also makes the Top 10.

Great look into Data Mining by Attack of the Show’s Kevin Pereira. Watch the video!

Our population needs to calm down.

“It’s free, but paid for by your tax dollars!” lol. Look at Citizen and Immigration going all tech. I’d be curious to see what my score would be.

Good move! People complain too much.

Nice! “Your information has not been released to the public” How about you?

“The average American child sees nearly 8,000 commercials on TV for food and beverages, and only 165 of these are for nutritious options like fruits and vegetables.” Whenever I see those wonderful Lays chips commercials I sure want some Lays. lol.

“Infographics are out of control” – lol! I love infographics though sometimes they can feel a little cluttery and distracting but for the most part it really helps put information into a simple to understand, simple to see, perspective.

Speaking of infographics! Thankfully I have never witnessed or been involved in a traumatic event. *crosses fingers it stays that way*

The last time I bought anything at HMV? *shrugs* We did buy a Thor doll there for Thor (our kitty) so I guess that was the last purchase but other than that…

Way of the future?

There’s a lot of Twitter guides out there but now there’s an official one by Twitter itself, for those in the media! Would this be useful for those in newsrooms still skeptical/confused about Twitter? Mayhapsly!

I still haven’t seen this yet but the reviews were so bad….. still, doesn’t everything get sequels these days? lol

I’m down with Scan to Pay!

It is pretty bad what happened, lol.

You worried? Well then don’t put bad things on the Internet, stupid!

Would you be okay with a digital wallet? My parent’s restaurant accepts cash only so that may be a problem for them lol.

Mike and I do own a Kindle. He even got one for his grandpa and is grandpa has been loving it too.

I can’t remember a Canada Day in the last say 5 years that I haven’t been working and this year is no exception. Still, Mike and I plan to enjoy it after I’m done work for that day, most likely in Spruce Grove rather than in Edmonton given our close proximity to the city which apparently has great Canada Day festivities too.

I did not even know a zettabyte was a word, lol.

This is most excellent.

Stock up on strawberries!

Calm down, pet owners. Thor is happy with a rolled up sock and a string from my hoodie, lol. Very, very happy.

I had no idea Google was launching its own Facebook competitor! I WANT TO BE PART OF BETA TESTING!

Kudos to Global! Well deserved. Global as a whole did great across the country too: Global News tops all competitors with 9 RTNDA National and Network Television Awards 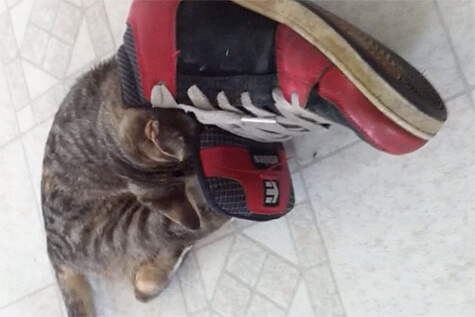 Linda Hoang is a Canadian blogger based in Edmonton, Alberta, who writes about travel, food, lifestyle and pet topics. She's also a seasoned social media/digital strategist with a journalism background, the founder of the Edmonton International Cat Festival and co-founder of Stop Race Based Hate, an online anti-racism education tool. Linda loves exploring the world with her partner Mike, eating their way through cities, supporting local businesses, and photographing Instagrammable Walls. Linda is a fur-mom to two cats and two dogs.
PrevPreviousClicks of the Day: June 24,25,26 2011 Weekend Edition!
NextFeature Story: Edmonton musicians from ’60s, ’70s, set to rock and roll at reunionNext