I feel like I’ve had an overdose of Will & Kate coverage this weekend, all of the Montreal shows were royal themed as the couple was in Quebec this weekend! Fun times. I love Kate! :D

I often comment on how disgusted I am with the human race, lol but I should also add that even though we are cruel and have destroyed this planet – you can’t deny our intelligence. More proof of that with this ‘breakthrough.’

Great news! Could you imagine if photoshopping models, celebrities, etc. was actually banned?

I hope we encounter them even earlier than that! #ThereIsLifeOnOtherPlanets

This is atrocious. A good reminder for reviewing bloggers though, I suppose.

Longest iPhone-shapped infographic ever ;) Happy anniversary iPhone! You are the best phone I’ve ever had and also the longest-lasting! So surprised I haven’t broke you yet!

It is unfortunate the negative reviews surrounding the new Final Cut.

Maybe MySpace can be saved? With the magical touch of JT!

I am eagerly awaiting my dang beta invitation!

Lol, best time and place to have a heart attack!

The two beaches I went to in California a couple years ago – Laguna and Huntington – were NOT on the list ! :)

Newspaper boxes turned into art! Reminds me of..

This kind of comes down to what I always write about whether or not infographics are great visualizations for information or if it’s just too messy, too confusing and distracting. This one is one that I’d classify as super messy and distracting, but still kind of interesting to look at.

“We share something because, for whatever reason, its ignites powerful emotions—good or bad—that arouse your nervous system.”

I still think we’ll need wallets but it just won’t hold cash. We’d still need it for other cards and IDs I feel!

So crazy… what a life. What a job.

As they should be. A reporter not using social media in this day and age is failing…

Um..great. Resident Evil is closer to happening than we all originally thought, lol. 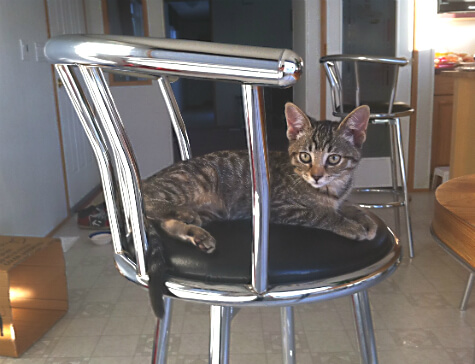 Thor likes to sit on chairs like she’s human :)

Linda Hoang is a Canadian blogger based in Edmonton, Alberta, who writes about travel, food, lifestyle and pet topics. She's also a seasoned social media/digital strategist with a journalism background, the founder of the Edmonton International Cat Festival and co-founder of Stop Race Based Hate, an online anti-racism education tool. Linda loves exploring the world with her partner Mike, eating their way through cities, supporting local businesses, and photographing Instagrammable Walls. Linda is a fur-mom to two cats and two dogs.
PrevPreviousFeature Story: Edmonton musicians from ’60s, ’70s, set to rock and roll at reunion
NextClicks of the Day: Monday, July 4, 2011 Edition!Next