Welcome to Wednesday, September 19 2012’s Clicks of the Day!

“Days after a judge decided to take an allegedly abused toddler off of life support, the appeal of that decision was denied. On Wednesday, the Appeals Court officially found no error in the decision from Friday, September 15 – and denied the appeal. Friday’s decision came after a doctor testified the child, who cannot be identified, but has been called “Baby M” suffered profound and irreversible brain injury, as a result of cardiac arrest. Two counts each of aggravated assault, criminal negligence causing bodily harm and failing to provide the necessities of life were laid against the parents.
The charges could be upgraded, in the case of the child’s death.”

This story is just so sad.

“The city is still trying to decide if it should turn the taps on to the iconic High Level Bridge waterfall next year. According to a report debated Wednesday during city council’s executive committee meeting, reopening the waterfall would cost $735,000 up front, plus yearly maintenance of around $40,000. Though the waterfall is much beloved, committee members aren’t sure they can commit funds to it.”

To be honest I’ve never witnessed the waterfall! Would love to but that’s a lot of money…

“Traditional marriage appears to be on the decline in Canada, while same-sex couples, step-families and common-law unions are on the rise, according to new census data from Statistics Canada.”

Mike and I are on our way to a pretty traditional marriage/family, lol. Exciting/interesting to see all of the different kinds of pairings/families/’Brady Brunches’ out there though!

“An unexpectedly high number of same-sex marriages in places like the oilpatch left census-takers scratching their heads — until they realized many of the “couples” were only splitting the rent. As a result, Statistics Canada said Wednesday, it may have overestimated by as many as 4,500 the number of same-sex married couples in parts of the country. A last-minute discovery forced the agency to hold back some census data on gay and lesbian married couples when they realized they couldn’t be certain if some people were hitched or only roommates.”

“Most Canadians have paid cash in order to avoid the sting of taxes – and they don’t feel bad about it either, according to a new poll. The results, released Wednesday by H&R Block Canada, found that 84 per cent of those surveyed admitted to paying cash for a product or service to avoid the sales tax. When presented with two quotes from a contractor – a cheque payment or a lower cash payment with no tax – 55 per cent of Canadians said they would choose cash.”

“Public health authorities say they have identified the source of Quebec City’s outbreak of legionnaires’ disease: an office building in the provincial capital. They say samples taken from a cooling tower in a building on St-Joseph Street in Quebec City’s lower-town area match the genetic fingerprint of the strain of Legionella bacteria found in patients who’ve been treated. Since the outbreak began in July, 180 cases have been reported. Thirteen people have died.”

“Authorities in northern Mexico detained a prison director and two other officials after 129 inmates escaped from the facility through a tunnel, officials said. The three prison leaders will be detained for 30 days during an investigation, Coahuila State Attorney General Homero Ramos told CNN en Español.”

“Concern is being raised about arsenic levels in rice after a consumer magazine discovered “troubling” amounts of the potential toxin in more than 200 samples of rice and rice products. The magazine Consumer Reports said Wednesday that it found “measurable amounts” of inorganic and organic arsenic in 223 products which included crackers, rice vinegar and even organic baby cereal. Some of the brands tested by the magazine are available in Canada.”

Arsenic levels or not… I don’t see myself cutting off the rice intake anytime soon, lol.

“An experimental drug used to treat multiple sclerosis has been shown to significantly reduce the number of relapses suffered by patients, according to two major studies. The studies, both published in the New England Journal of Medicine on Wednesday, show that the drug BG-12 also reduces the number of brain lesions that are found in MS patients.”

“You may want to think twice before sticking that pacifier back in your baby boy’s mouth: Three new studies, published Tuesday as a single research report, find that heavy pacifier use leads to stunted emotional development among males.”

“A new way of using gene therapy to help those fighting the battle of the bulge has been discovered by University of Alberta researchers. The treatment focuses on increasing levels of a hormone released from fat cells.”

“There are now 197 new reasons for iPhone, iPod Touch, and iPad users to upgrade to iOS 6, with Apple closing the same number of vulnerabilities in its mobile operating system. The company released its security bulletin for the new version of iOS today, revealing what security flaws have existed in previous versions. Vulnerabilities include three different ways of completely bypassing iOS’ passcode lock, and at least 10 different ways of running arbitrary code. The latter types of vulnerabilities are what enable users to jailbreak their devices.”

“The extent of the ice at the end of the annual melt has dropped to 3.41 million square kilometres (1.32 million square miles), just over half the minimum area covered on average between 1979 and 2000. This year has seen the largest annual melt since the satellite records began in 1979, with 11.83 million square kilometres (4.57 million square miles) of ice melting since March. While ice cover is now expected to increase as winter comes, a shift in wind patterns or a period of late season melt could see levels fall further, the NSIDC said. The new record low reinforces the long-term downward trend in the extent of the Arctic sea ice, the scientists said.”

“The U.S. and Mexico are not secretly planning to invade Canada, a State Department spokeswoman confirmed to laughter during a daily press briefing.”

“There’s nobody quite like him! Korean rap sensation Psy gave a show-stopping performance of his epic song, “Gangnam Style,” right on the show. You won’t see another one like this!”

He is EVERYWHERE! I cannot get enough of him, lol. I am so happy for his success!!! :) And while we’re at it:

“Their web video was all over YouTube and they’re here to perform their Gangnam Style duet! This mom-and-son dance team are too cute to miss.” 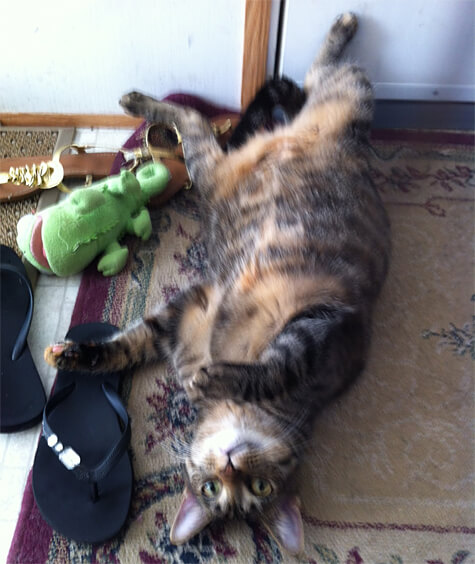 Linda Hoang is a Canadian blogger based in Edmonton, Alberta, who writes about travel, food, lifestyle and pet topics. She's also a seasoned social media/digital strategist with a journalism background, the founder of the Edmonton International Cat Festival and co-founder of Stop Race Based Hate, an online anti-racism education tool. Linda loves exploring the world with her partner Mike, eating their way through cities, supporting local businesses, and photographing Instagrammable Walls. Linda is a fur-mom to two cats and two dogs.
PrevPreviousClicks of the Day: Tuesday, September 18, 2012 Edition!
NextClicks of the Day: Thursday, September 20, 2012 Edition!Next