“Two days after the mayor issued a public statement – inviting the Katz Group to hold public negotiations on the downtown arena project – the company has responded to, and declined, the offer.”

Ah. Will this never end.

“Plans to develop land across from Servus Place in St. Albert have been put on hold indefinitely and the developer is now under fire for comments he made about teenagers in the neighbourhood. Conditions on Canterra Development’s plan to build on a vacant field across from Servus Place in the Kingswood neighbourhood included donating 10 per cent of the land to the community. However, now that the city wants to build a high school in that space, St. Albert’s mayor says the developer is refusing to move forward with the plan. Mayor Nolan Crouse says the developer told him on several occasions that “teenagers don’t make good neighbours.””

Yikes… who says that?!

“A seven-year-old Edmonton boy seriously hurt in a crash on Highway 63 is slowly improving but doctors still don’t know if he will fully recover, his parents say.”

“The federal government is bringing in new rules to help families of gravely ill or injured children. Legislation to be tabled this week called the Helping Families in Need Act will allow parents whose children develop serious diseases such as cancer to collect Employment Insurance benefits for up to 35 weeks. There will also be amendments to the Canada Labour Code to protect the jobs of parents who take leaves of absence to care for critically ill children.”

“It’s over — the tuition increase that triggered such social strife in Quebec has been cancelled. The Parti Quebecois government repealed the fee hike, by decree, in its first cabinet meeting Thursday on its first full day in office. Premier Pauline Marois acted on a promise that she had made during the election campaign. She announced the decision at a news conference after the meeting.”

So the riots will stop…

“A U.S. judge has denied a request to force YouTube to remove an anti-Islam film trailer that has been blamed for causing deadly protests in the Muslim world. The judge rejected the request from Cindy Lee Garcia, an actress who appears in the clip, in part because the man behind the film was not served with a copy of the lawsuit.”

“Prosecutors are seeking more charges against the suspect in the U.S. theatre rampage that killed 12 in one of the worst mass shootings in the country’s history, a new court document says.”

“Almost a third of Canadian children are considered either overweight or obese, new figures from Statistics Canada reveal. According to the latest Canadian Health Measures Survey, 31.5 per cent of children aged five to 17 were overweight in 2009 to 2011. That’s an estimated 1.6 million kids.”

Sad but not surprising!

“Ever since Apple rolled out iOS 6 on Wednesday, iPhone users have panned the new maps app for being noticeably worse than Google Maps. One even created a new Tumblr curating user-submitted images of mapping fails on the new OS. Now, Trudy Miller, a spokesperson for Apple, has offered the following statement in response to these complaints: We launched this new map service knowing it is a major initiative and that we are just getting started with it. Maps is a cloud-based solution and the more people use it, the better it will get.”

“You do your best to connect with your family, your children, setting aside family-only time in order to connect with your kids. Family dinners work well, but using smartphones and tablets is a rising trend in bonding with, teaching and pacifying young ones, a recent survey shows.”

“For most of us, an exceptional number of top-notch online reviews determines which movie, hotel room, car or gadget we will choose over the competition. It’s the same for foodies deciding where to host a celebratory dinner or just looking for a great morning cup of joe. What’s now a huge problem with falsified online restaurant reviews is going to explode over time. By 2014, 10% to 15% of social media reviews will be fake and paid for by companies, according to a new study by tech research company Gartner. Increased customer reliance on amateur reviews exacerbates unmerited ratings.”

Oh darn. Well just know that MY reviews will be real (and I have a backlog of restaurants I have to still review…)

“After being the smiling, fuzzy face of Zellers since 1986, teddy bear mascot “Zeddy” has been set free from his duties of taking pictures with small children at Zellers locations across Canada. The video is part of the Zellers marketing campaign to not just spread the word that they’re going out of business (soon to be replaced by Target locations in many parts of Canada), but that they’re looking for a new home for Zeddy. The company’s Facebook page is hosting a contest to give a charitable organization the chance to be Zeddy’s new home and receive a $5000 donation.”

Aw poor Zeddy – but also, neat for them to go about this approach as part of their going-out-of-business!

“Air Canada says it will hire about 1,100 employees across a number of fields, including 200 at its new low-cost carrier. The airline said Thursday the jobs are part of its strategy to “seize new commercial opportunities, enhance customer service and renew our workforce.” Air Canada says it will hire approximately 400 flight attendants and some 500 airport customer service agents and baggage handlers.”

“Canada’s aging population, combined with a lacklustre birthrate, is going to dramatically impact our country’s economic performance in the future, according to an expert in the field. Canada is going to prove troublesome within the next 12 years, David Foot, a professor of economics at the University of Toronto and co-author of the book “Boom, Bust & Echo: How to Profit from the Coming Demographic Shift” told the Global Business Forum in Banff, Alta.”

“Tanya Heath is on a double mission: to prove women can wear heels without ruining their feet, and that her answer to their plight, a heel that switches from high to low, can be made entirely in France. The Paris-based Canadian started with a simple idea. When your shoes start to hurt — half way through a party, a wedding or a workday — press a button in the sole, slot out your dressy high heel and replace it with a walking version.”

“Julian Barbour’s solution to the problem of time in physics and cosmology is as simply stated as it is radical: there is no such thing as time. “If you try to get your hands on time, it’s always slipping through your fingers,” says Barbour. “People are sure time is there, but they can’t get hold of it. My feeling is that they can’t get hold of it because it isn’t there at all.” ”

“Sir Richard Branson wants to start a colony on Mars. The entrepreneur — who runs the Virgin Galactic program, which is planning to launch space tours of Earth in 2014 — is “determined” to populate the ‘Red Planet’ and thinks it is an achievable dream.”

“Good news for giraffes! Construction has started on a house that’s being called the world’s narrowest. The dwelling — located in a passageway between two buildings in Warsaw, Poland’s Wola district — measures 47 inches at its widest point and 27 inches at its narrowest.”

Many of my comments today for stories appear to be ‘hmmm’ but I feel like it applies, lol.

“Asia’s most expensive drink can be had for a whopping S$32,000 (around US$26,000) at a club for the super rich in Singapore, reported Malaysia’s Bernama news agency Tuesday.”

What a waste of money!

“A goat at a petting zoo gets it’s foot caught, fortunately for him, a super hero pig comes along to save the day.” 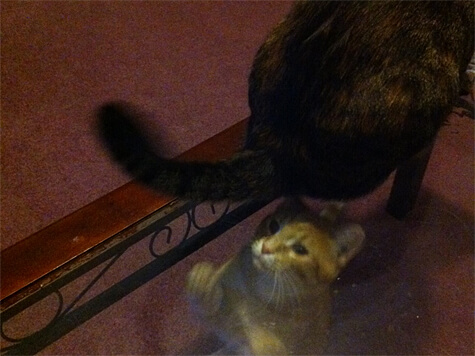 Linda Hoang is a Canadian blogger based in Edmonton, Alberta, who writes about travel, food lifestyle and pet topics. She's also a seasoned social media/digital strategist with a journalism background. Linda loves exploring the world with her husband Mike, eating their way through cities, supporting local businesses, and photographing Instagrammable Walls. She is the founder of the Edmonton International Cat Festival and a fur-mom to two cats and two dogs.
PrevPreviousClicks of the Day: Wednesday, September 19, 2012 Edition!
NextClicks of the Day: September 21, 22, 23 2012 Weekend Edition!Next