“Chan was just the third curator chosen for the project and posted about day-to-day Edmonton events, the food scene, and different Alberta connections and tidbits. He helped one man who was trying to decide which Canadian university to go, he talked Canadian politics and healthcare to another tweeter and initiated a number of Twitter games and trivia to get people interacting with the account. His clever and funny voice drew people into conversations — many sharing their own opinions of Edmonton and Canada with Chan.”

““Now, the vision stands, but based on everything we know, subsequent to the New York framework, some things have changed. The costs of the arena and the winter garden are higher,” Katz said. “If we don’t move quickly, this deal’s done, time is our enemy.””

“After more than 900 striking support staff with Edmonton Catholic Schools regrouped Tuesday, officials with the union said the picket line will expand on Wednesday. Striking workers met at the Santa Maria Goretti Centre on Tuesday to discuss strategy – and the union confirmed striking workers will be asked to show up at a Catholic school somewhere in Edmonton on Wednesday afternoon. Until now, the picket line has remained at the downtown offices of the Edmonton Catholic School board.”

“While still facing termination from his post at Ross Sheppard High School, “no-zero” teacher Lynden Dorval will be returning to the classroom this October. The formerly ousted physics teacher — who was suspended last spring for giving students zeroes on assignments — accepted a new post Tuesday at Tempo School, a private kindergarten to Grade 12 school in Riverbend. “I took the job, yup,” Dorval said proudly when reached at his home Tuesday evening. “The headmaster called me yesterday at home and mentioned they were looking for an advanced placement physics teacher, so I said yes,” he explained.”

“Almost half of all the commercial vehicles city cops pulled over Tuesday in a traffic safety crackdown failed inspection. And it’s a stat that both city cops and the Alberta Motor Association want to see curbed. The police service’s traffic unit surveyed more than 100 vehicles on Yellowhead Trail near 121 Street following the morning rush hour as part of fall compliance checks on commercial vehicles. “As you can imagine, these vehicles have thousands of pounds on them,” said traffic section Sgt. Patti Nichol. “When they come up to a set of lights and it’s red, and they’ve got to stop short, we’ve got to make sure that all of their equipment can handle the weight.”

“One of Edmonton’s best-known hotels is undergoing a major redevelopment that will put half of its more than 400 employees out of work. SilverBirch Hotels and Resorts plans to modernize the Mayfield Inn and Suites in a redevelopment that will demolish some facilities and close the facility for months. “We are going to spend $62 million to fully renovate the entire hotel from the front parking lot to the back parking lot, every guest room, the restaurants, the ballrooms — every aspect of the facility will be fully renovated,” said Steve Giblin, the president and CEO of Vancouver-based SilverBirch.”

Sad for those employees. This major renovation is also what screwed our wedding plans – and the reason why we had to push our date back because by the time we knew what was happening (and the fact that the courtyard was being demolished) – most summer dates had been taken at most other Edmonton wedding venues. Grrrrr. Unimpressed.

“An American dermatology expert is joining the call to ban the use of indoor tanning beds by minors in Alberta, where the cancer-causing pastime is both popular and entirely unregulated. “The data is becoming very, very strong and from multiple sources,” Lim explained, adding the World Health Organization officially designated tanning beds as a cancer causing agent on par with cigarettes in 2009. “The sad part is that this is something that is totally preventable,” said Lim. “If you do not go to tanning beds, you will have a far lower risk of developing skin cancer.””

Have never used a tanning bed in my life and don’t ever plan on using them!

“The Canadian flag was back at the Quebec National Assembly for the swearing-in of Liberal and CAQ MNAs on Tuesday, a day after it was removed for the swearing-in of Parti Quebecois politicians. The Maple Leaf was noticeably absent from the Red Room of the provincial legislature Monday when PQ leader and premier-elect Pauline Marois pledged allegiance to the Queen and the people of Quebec. PQ MNAs were sworn in on Monday, followed by their Liberal and Coalition Avenir Quebec counterparts on Tuesday. On Tuesday, Quebec politicians dismissed any notion of a controversy. “I think it is not a priority for Quebecers,” said CAQ leader Francois Legault. “I think right now the last thing people want to see at the National Assembly is a battle over flags.””

“Mitt Romney refused to apologise on Tuesday for describing 47% of Americans as government-dependent “victims” in a covertly recorded video that has thrown his presidential campaign into disarray.”

“It is through the Internet that millions of people around the world learned the story of Hélène Campbell, the spunky 20-year-old Ottawa woman who received a new set of lungs six months ago. And it is through the Internet that Ms. Campbell hopes to convince more Canadians to register as organ donors. She joined federal Health Minister Leona Aglukkaq and Jordan Banks, the managing director of Facebook Canada, at a news conference on Tuesday where they announced that Canadians will have access to the social media platform’s organ-donation status tool. Facebook users from Canada who go online to register their willingness to donate their organs will be asked to share news on their Facebook page, the hope being that their friends will then feel compelled to follow suit. If people are not already registered with their provincial donor registry, they can find a link to the official donor registry on their Facebook timeline.”

How can you get more top of mind than seeing organ donation encouragements on Facebook?

“Children with higher levels of bisphenol A are more likely to be obese, according to a new U.S. study of nearly 3,000 children and adolescents. The manufactured chemical, known as BPA, is typically found in plastic consumer products such as water bottles. Its use is restricted in Canada in products such as baby bottles and sippy cups, over concerns it mimics the hormone estrogen. However the new study published Tuesday in the Journal of the American Medical Association, suggests “ubiquitous” exposure to BPA may be linked to obesity in age children.”

Maaan everything is linked to obesity these days.

“Microsoft is urging Windows users to install a free piece of security software to protect PCs from a newly discovered “zero-day” security flaw in its Internet Explorer browser which hackers are already exploiting to take remote control of computers.”

No one should be using Internet Explorer – hacked or not, lol.

“Twitter is getting an overhaul. The site announced major changes on Tuesday with redesigned profiles, updated apps and a sharper focus on pictures. A new emphasis on profile pages will allow people to upload a header photo that will run across the top of the screen. The banner-like image is reminiscent of Facebook’s cover photos on its timeline. A person’s avatar will also be a prime focus as it gets moved from the left hand corner to front and centre of the page. A revamped photo stream will appear below a person’s most recent Tweets on iPhone, Android and iPad.”

“Facebook friends played a big role in getting hundreds of thousands of Americans to vote in 2010, a new scientific study claims. Facebook researchers and scientists at the University of California, San Diego conducted a massive online experiment in the congressional election to test and measure the political power of online peer pressure. They found that people who got Facebook messages that their friends had voted were a bit more likely to go to the polls than those who did not get the same reminder. And from there the effect multiplied in the social network, they reported in Thursday’s journal Nature.”

“Researchers in the Yukon are testing a machine that can convert used plastics into diesel fuel. The machine, developed by the Japanese company Blest, takes plastic items and transforms them into a fuel that can be burned without refining.”

“On average, this data suggests that at least 1.7 birds careen into the typical home in a given year (although there was wide variation among the homes in this sample). Extrapolate that out to the entire country, and that means about 22 million birds die this way across Canada each year.”

“An astonished filmmaker is coming to grips with the moment he witnessed one of nature’s rarest phenomenons – a tornado comprised entirely of fire- and lived to tell the tale. Chris Tangey had been out in Alice Springs, Australia, scouting locations for a new movie. After finishing the task, he went over to help workers at a cattle station when he was confronted by one of nature’s most intimidating spectacles.”

Could you imagine being there!?!? Wow! 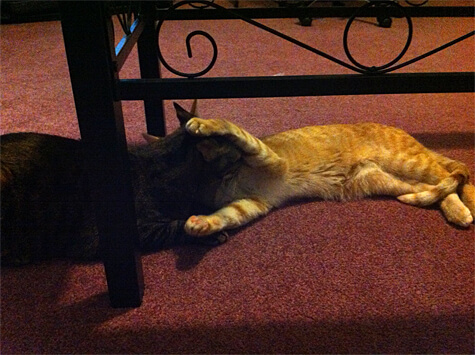 Linda Hoang is a Canadian blogger based in Edmonton, Alberta, who writes about travel, food, lifestyle and pet topics. She's also a seasoned social media/digital strategist with a journalism background, the founder of the Edmonton International Cat Festival and co-founder of Stop Race Based Hate, an online anti-racism education tool. Linda loves exploring the world with her partner Mike, eating their way through cities, supporting local businesses, and photographing Instagrammable Walls. Linda is a fur-mom to two cats and two dogs.
PrevPreviousSocial Media Column: Author Marty Chan shares on Twitter what Edmonton means to him
NextClicks of the Day: Wednesday, September 19, 2012 Edition!Next