Welcome to Wednesday, October 5 2011’s Clicks of the Day!

“Steve Jobs, the Apple founder and former CEO who invented and masterfully marketed ever-sleeker gadgets that transformed everyday technology, from the personal computer to the iPod and iPhone, died Wednesday. He was 56.”

“Apple has lost a visionary and creative genius, and the world has lost an amazing human being.”

From the Apple I to the iPad…

My timeline certainly exploded with tweets about Jobs’ death. #ThankYouSteve

“People pay their respects to Steve Jobs, who died today, by leaving flowers outside the Apple store in downtown San Francisco.”

“For the first time, astronomers have found water on a comet that’s a chemical match for water on Earth, a new study says. The discovery backs up theories that water-rich comets helped fill ancient Earth’s oceans.”

“What if a pill could stop you from getting drunk in the first place? That’s the premise of a new “stay sober” tablet.” What is the point of drinking then? This is illogical, lol.

“As we all know, all good things come to an end. Here are three ways Facebook might meet its untimely demise.”

“Here are 10 predictions from panelists at this year’s forum on what the future of media will look like in five to ten years.”

I don’t know about radio just being online.

“Samsung, whose Galaxy Tab and Galaxy phones have been blocked for sale in various countries by Apple, is fighting back by trying to get the iPhone 4S banned for sale in France and Italy.”

“Canada ranks No. 1 in our annual look at the Best Countries for Business. While the U.S. is paralyzed by fears of a double-dip recession and Europe struggles with sovereign debt issues, Canada’s economy has held up better than most.”

“The good news is, even with a sluggish economy, violent crime in the U.S. has gone down over the last four years. The bad news is, Detroit logged 345 murders last year, helping to make it the most violent city in America.”

“Meet Click & Grow, the technologically enhanced, fool-proof way to usher greenery into your home. It’s a planting system composed of an electronic flowerpot and a plant cartridge. Sounds simple, right? But wait, there’s more! It needs neither soil nor fertilizer. It’s all in there.”

My mom would LOVE this!

“Parents should encourage kids under 18 to limit the time they spend talking on cellphones, Health Canada said Tuesday in new advice on mobile phone usage.”

Not just talking on the phone, just using cell phones in general would probably be a good idea lol.

“B.C. is beginning to change its advertising and marketing campaigns to something a little less boastful.”

Lol. Best not to be braggy.

“Footage shows the pet uttering the two-letter negative over and over again. For close to two minutes the tawny cat keeps up its impressive impersonation.”

“Square-Enix has had some problems with the Final Fantasy brand lately…. The company seems to be ignoring gamers’ called for a remake or legitimate sequel of Final Fantasy 7.”

“Capturing those priceless moments, “for better or for worse.” 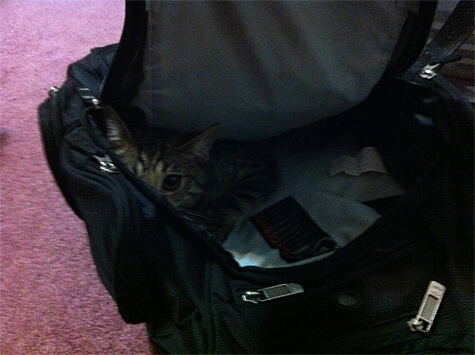 In her zombie apocalypse getaway backpack!

Linda Hoang is a Canadian blogger based in Edmonton, Alberta, who writes about travel, food, lifestyle and pet topics. She's also a seasoned social media/digital strategist with a journalism background, the founder of the Edmonton International Cat Festival and co-founder of Stop Race Based Hate, an online anti-racism education tool. Linda loves exploring the world with her partner Mike, eating their way through cities, supporting local businesses, and photographing Instagrammable Walls. Linda is a fur-mom to two cats and two dogs.
PrevPreviousClicks of the Day: Tuesday, October 4, 2011 Edition!
NextClicks of the Day: Oct 14, 15, 16 2011 Weekend Edition!Next