“Officially, Apple has not even confirmed any plans to update the iPad 2, which has been on the market for less than a year. Yet the folks in Cupertino have done little to silence the screams of the iPad 3 online rumour mill.”

Too soon!? I love Apple but man, so much tech, lol.

“A new publication by CNET claims to have unveiled the last big project which Steve Jobs was working on and it was not the iPhone 4S. Rather he was deeply involved in everything from concept to design of the all new, redesigned iPhone 5.”

And his legacy continues! Although the expected debut date is Summer 2012 – that seems way too soon – again – so much tech!

“Some were so big you had to carry a separate bag containing their electronic innards, and if you weren’t careful, you might end up with a dislocated shoulder by the end of the day.”

Lol they really used to be bricks!!

“DigitalPuck.ca recently talked to Randy Marsden, co-founder of Swype, about thinking out of the box, pursuing ideas as an entrepreneur, and pushing for funding. Swype sold to Nuance Communications of Burlington, Ma., last week for $102.5 million.”

“More and more people are going vegetarian — at least part-time — as they join a movement that suggests even a small change in their diet can pay dividends for both their health and the health of the planet.”

Idk, I feel like I’m too much of a carnivore to be part-time vegetarian, lol.

“A shocking 91 percent of recruiters screen applicants via social networks.”

As if you needed more reason not to put up those drunk photos of you people!

“Today, as we move further into the cloud, and witness the latest and greatest pocket media devices, we thought it fitting to take a look back at how far we’ve come on our quest to store as much information in as little space as possible.”

“Mobile application downloads are set to explode in the coming years.”

“IBM has announced plans to create a “cognitive computer” that will simulate the same number of neurons as the human brain.”

Robots will soon take over our world.~

“Drawing on messages posted by more than two million people in 84 countries, researchers discovered that the emotional tone of people’s messages followed a similar pattern not only through the day but also through the week and the changing seasons.”

So we’re all pretty much the same! lol. Boring!

“Spurred by the unwanted and rowdy side effects that sometimes accompany a night on the town, drinking establishments have turned to a novel approach to save overindulging revelers from broken bones and bruised egos: rubber sidewalks.”

Too weird!!! Just don’t drink so crazy that you’re going to get into fights and/or trip and fall, people.

“The precise “day of 7 billion” may not matter much. But the inaccuracies make it harder to answer a more important question: is human population set to peak within the next few decades or will it carry on growing beyond that?”

Not only are humans destroying our planet but we’re also overpopulating it, lol.

“Siri is, simply put, amazing. It can schedule appointments, take dictation, check the weather, find restaurants, search the web, and more. It basically serves as a virtual assistant of sorts.”

Lol, it’s pretty funny the responses Siri dishes out but I have observed Mike communicating with Siri and I find that she didn’t pick up on what he was saying a LOT. I hope she doesn’t kill me first when she becomes aware, lol.

“This is the future, people! This child will never live in a world without iPads.”

Fascinating! I would not have wanted to be those researchers though.

“A U.K.-wide study shows that one in six mobile phones in Britain have fecal matter on them on them. What’s more, 92% of cellphones are contaminated with bacteria.”

“While the average age of today’s video game player is 37 years old, new research shows that the youngest generation is as game savvy as they get.”

Not surprised at all – that’s the world we’re living in!

Global News’ Occupy Wall Street special site — absolutely crazy how there were tens of thousands of protesters worldwide this weekend!

“With flu season just around the corner, starting Monday, Albertans will be able to roll up their sleeves to protect themselves from the virus.”

NO THANKS. I do not believe in the flu shot.

“After an epic 75,000 kilometre, 11-year trek across the globe, the Montreal native said he’s looking forward to more casual strolls through his hometown’s parks.”

I don’t know. I am in major disagreement with this – what man leaves his wife/family for 11 years? That’s not cool at all!

“A corn maze near Boston proved too big a challenge for a couple and their children, who called out the local police to rescue them.”

Lol. This is hilarious. Why didn’t they just call the corn maze business number or something? lol.

“Okay, so here’s the deal gang. I have a giveaway! That’s right, 2 tickets to the Edmonton Rocky Mountain Wine & Food Festival.” 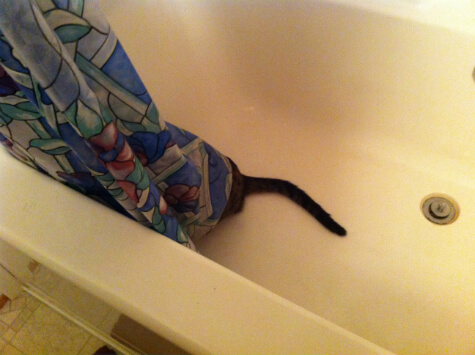 Linda Hoang is a Canadian blogger based in Edmonton, Alberta, who writes about travel, food, lifestyle and pet topics. She's also a seasoned social media/digital strategist with a journalism background, the founder of the Edmonton International Cat Festival and co-founder of Stop Race Based Hate, an online anti-racism education tool. Linda loves exploring the world with her partner Mike, eating their way through cities, supporting local businesses, and photographing Instagrammable Walls. Linda is a fur-mom to two cats and two dogs.
PrevPreviousClicks of the Day: Wednesday, October 5, 2011 Edition!
NextClicks of the Day: Monday, October 17, 2011 Edition!Next