“Denmark has imposed a “fat tax” on foods such as butter and oil as a way to curb unhealthy eating habits.”

Should we be doing that here in Canader?

“I did everything I was supposed to and I have nothing to show for it.”

Great read about the Occupy Movement.

“While the numbers tell one part of the story, free ads posted on Craigslist by people who are out of work and desperately seeking paid employment show a more personal side of today’s horrendous jobs market.”

“Apple Inc., the world’s largest smartphone maker, is having trouble selling iPhones in India, a market with 602 million active subscribers.”

I’m starting to feel bad for RIM so I’m happy for them in this situation, lol.

“Almost everyone loves the work of superstar creator and director J.J. Abrams… the dude has a way with creating original material and igniting the hype machine. Well, it looks like J.J. is at it again.”

“American’s are still sharply divided about the morality of doctor-assisted suicide.”

Also includes an interesting chart showing other topics Americans are divided over.

The eggplant skull is hilarious!!!

“A Formula One tycoon is linking up with KLM, the Dutch airline, to develop spacecraft that could bring every city on Earth within two hours’ travel time.”

That would be bad ass.

China’s taking over the world!

I really like the camera/video improvements. I won’t be getting it, I’ll hold out for the next upgrade since my iPhone 4 is fine right now. But Mike’s going to be getting the 4S (upgrading from his lame Android!)

“Disney is planning to re-release a cadre of its most popular and beloved animated films in 3D.”

Also not surprised. But for the record I consumed 0% alcohol in high school and the stats are pretty close to that even now lol.

“According to a survey by food research firm Technomic, 47% of Americans say they want healthier restaurant options, but only about 23% actually order them.”

Fair points. For the record I actually do like the salads at fast food joints (well, I’ve tried them at Wendys and McDonalds and they were delicious!) but yeah, you don’t go out to eat salad, lol.

“Four-year-old Faris is seeing the movie for the first time, so that “WTF” moment is still brand new to him. His surprise is written all over his tiny face, and luckily his dad had a camera handy so we could all appreciate the cuteness.”

“After over two decades, FOX’s legendary animated series The Simpsons could be coming to an end because of…contract negotiations?”

Noooo! I mean, I know it’s not as funny as it used to be but Simpsons is one of those shows I feel could last forever and ever, lol. (Unlike most shows even if I love them I feel that after a certain period of time they should wrap it up so there’s no time to go downhill lol).

I don’t drink anything from Starbucks (nor do I drink coffee at all) – but I’ll say, good maybe this will deter coffee addicts! (I feel you should not need to have coffee in order to ‘function’ properly throughout the day).

“In the future people stop aging at 25 and must work to buy themselves more time.”

I’m excited to see this movie! Such a cool concept.

“Reacting to heightened fears about radioactivity following the nuclear disaster that engulfed the Fukushima plant after March’s earthquake and tsunami, the company have created smartphone covers that can gauge airborne radiation levels.” 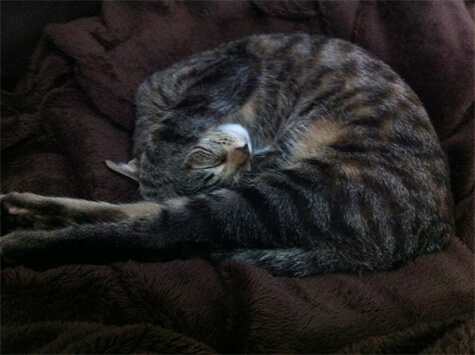 Linda Hoang is a Canadian blogger based in Edmonton, Alberta, who writes about travel, food, lifestyle and pet topics. She's also a seasoned social media/digital strategist with a journalism background, the founder of the Edmonton International Cat Festival and co-founder of Stop Race Based Hate, an online anti-racism education tool. Linda loves exploring the world with her partner Mike, eating their way through cities, supporting local businesses, and photographing Instagrammable Walls. Linda is a fur-mom to two cats and two dogs.
PrevPrevious[Video]: Meet Thor the Thunder Kitty
NextClicks of the Day: Wednesday, October 5, 2011 Edition!Next