“The new partnership between the two companies includes movies from Disney, Disney-Pixar and DreamWorks Studios. The films, some of which have already arrived on YouTube, are available to rent starting at $1.99.”

“The increase in videos served comes as YouTube is capturing more eyeballs around the world. It now has more than 800 million unique viewers per month, and more than half its views come from non-English speakers.”

That’s a lot of time wasted on YouTube worldwide! ;)

“The police commissioner’s letter makes clear that journalists are entitled to cross police and fire lines, unless it is unsafe or a live crime scene, and officers have a duty to provide access and information to the extent they can.”

“Alberta drivers are the worst in Canada at making the switch to winter driving, show statistics released Wednesday by insurance company Aviva Canada.”

“According to a recent survey commissioned by Canadian Tire, Albertans are the least likely to outfit their cars with winter-rated tires, effectively turning their vehicles – and the roads on which they drive – into a carnival ride.”

Also not surprising (myself included in this statistic, I have all seasons! Which technically passes winter driving benchmarks, so there. lol).

“The report also details some rumours, suggesting that production of the Apple TV will begin in February at a Sharp factory in Sakai, launching some time in mid-2012.”

“Some of Edmonton’s chronically homeless cost the system more than $200,000 a year through nuisance calls to police, emergency room visits and psychiatric treatment.”

That’s an unfortunate use of monies.

“The Lens Dial is one of those badass accessories that you could almost just dream about if someone didn’t come along and actually make it. However, just because it’s badass doesn’t mean that it is cheap. This badboy will set you back a whole cool $249, but boy will you have some cool gadgets to play with.”

Wow, this looks so cool. A tad expensive as I have bought little lenses for my iPhone for a lot cheaper in the past (and subsequently lost them because the lenses were so small, lol) but it is pretty badass an accessory.

“We asked industry execs and game creators for their strategies on powering through a tower of video games.”

Lol, awesome. Playing games at work, during breakfast, on airplanes.

“Letting loose with a satisfying string of expletives can significantly reduce physical pain, research has shown. But according to a new study, it doesn’t work as well if you make a habit of cursing frequently.”

I rarely swear, but I definitely do when I stub a toe or hit my knee on something, lol. Good to know it helps.

“Investigators allege Jones broke into a second home in the neighborhood later in the day and left himself logged into Facebook on the victim’s computer.”

“On Tuesday, the BBB’s network was hacked and the organizations databases were accessed. As a result, BBB members and non-members are receiving an email claiming there has been a complaint against their business.”

Great read. So true. Pack it up, Occupiers.

“It’s a common sight in the winter — Canadians with mittens, boots and shovels digging out from under a snowstorm. A new study has shown that, if you are in a particular high-risk group, this is an activity that can kill you.”

“It is considered one of the basics of politeness, but saying “thank you” may be dying out, according to new research.” 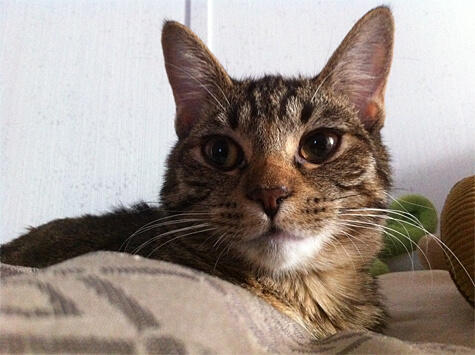 Linda Hoang is a Canadian blogger based in Edmonton, Alberta, who writes about travel, food, lifestyle and pet topics. She's also a seasoned social media/digital strategist with a journalism background, the founder of the Edmonton International Cat Festival and co-founder of Stop Race Based Hate, an online anti-racism education tool. Linda loves exploring the world with her partner Mike, eating their way through cities, supporting local businesses, and photographing Instagrammable Walls. Linda is a fur-mom to two cats and two dogs.
PrevPreviousClicks of the Day: Tuesday, November 22, 2011 Edition!
NextClicks of the Day: Thursday, November 24, 2011 Edition!Next