“Facebook’s worldwide tech-driven Manifest Destiny continues. This time it’s with a phone, named Buffy. Because it will slay the market. Seriously.”

Lol. Seriously. Meh not sure if a Facebook phone is a good idea but the name makes it even more silly, lol.

This is unsurprising data.

“”We found that the degrees of separation between any two Facebook users is smaller than the commonly cited six degrees, and has been shrinking over the past three years as Facebook has grown,'”

This is also unsurprising data, lol.

“Many media giants — including Forbes, Fox News, and ABC’s “Good Morning America” — have used images without crediting the college paper.”

“‘In relation to AP staff being taken into custody at the Occupy Wall Street story, we’ve had a breakdown in staff sticking to policies around social media and everyone needs to get with their folks now to tell them to knock it off,’ went one version of the e-mail sent from on high, as obtained by Daily Intel. ‘We have had staff tweet – BEFORE THE MATERIAL WAS ON THE WIRE – that staff were arrested.’ The official rules note, ‘Don’t break news that we haven’t published, no matter the format.'”

I can kind of see where AP is coming from but at the same time, adjust to the times because…

“The Associated Press is fighting a losing battle if it is going to try and keep the news off Twitter or the web until it can publish something on the regular wire. As New York Times media reporter Brian Stelter — who has been at the vanguard of using Twitter (and Tumblr) for reporting on events like the tornado in Missouri — noted, if Twitter is beating the wire then maybe the wire should speed up.”

“The rules lay out how bureaucrats should use public social networks to communicate with citizens and with each other, be it via sites like Facebook or those which allow multiple users to create and share information online.”

Here’s a link to the full set of guidelines (it’s a yawnfest, a long one, lol): Federal Governments’ Social Media/Web 2.0 Guidelines.

Good for them for allowing employees to get on social media though. Rules can be a nag though, lol.

“At issue is Corso’s communal table, a high, 10-seat “family style” table near the front of the room. Some people directed there sit down, decide they don’t like the vibe and leave, Costa says.”

I’ve never actually sat a communal table but I don’t think it’d be that weird. I can see how people would be wary at first though. The first time I heard about these types of tables was from my friend Matt who is a chef at the new Cibo Bistro. I still have to try it ;) You should also!

“Google TV — which currently comes built-in on certain Sony Corp television models and on Logitech International set-top boxes — allows consumers to access online videos and websites on their TVs, as well as specialized apps such as video games.”

“In the end, the iPhone 4S offers convenience—light weight, fits in pocket, simple controls—along with competitive, if not excellent, image quality. Unless you need or want full manual control or greater versatility in lens options, the iPhone 4S certainly makes a great photographic tool.”

This is extremely long and I’ll be honest I didn’t read all 4 pages of it, lol. But it is pretty interesting and good that it’s in-depth but I cut to the chase mostly at the end. Still yeah I can’t see any professional photographer actually ditching their DSLR equipment altogether to using an iPhone 4S camera only. That would be silly. But good to know that it’s a great photographic tool.

Lol, come on people… be smarter.

“Members of the Occupy Edmonton demonstration presented a list on Tuesday of demands that they want met before leaving a downtown park.” 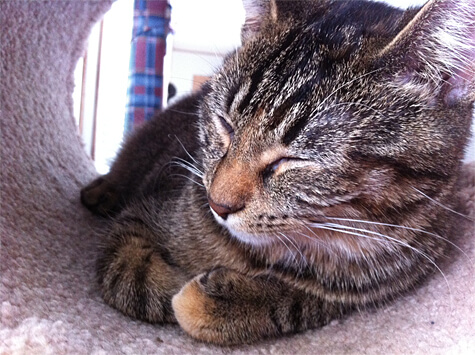 Linda Hoang is a Canadian blogger based in Edmonton, Alberta, who writes about travel, food, lifestyle and pet topics. She's also a seasoned social media/digital strategist with a journalism background, the founder of the Edmonton International Cat Festival and co-founder of Stop Race Based Hate, an online anti-racism education tool. Linda loves exploring the world with her partner Mike, eating their way through cities, supporting local businesses, and photographing Instagrammable Walls. Linda is a fur-mom to two cats and two dogs.
PrevPreviousClicks of the Day: Monday, November 21, 2011 Edition!
NextClicks of the Day: Wednesday, November 23, 2011 Edition!Next