“An honour recognizing examples of government waste has been bestowed on Alberta MLAs for serving on a committee that has failed to meet in more than three years yet continues to pay members $1,000 a month.”

My goodness… That waste of taxpayer money discovery revealed by the Canadian Taxpayer’s Federation which revealed its list of biggest government waste of the year today. More below:

“Former Bloc Quebecois leader Gilles Duceppe, Agriculture Canada, the City of Montreal and Alberta politicians have been labeled the worst of the worst in government waste by the Canadian Taxpayers Federation.”

Lol the video of the Montreal snowplows plowing nothing is pretty hilarious. Also – “City of St. Albert, Alberta: It’s alleged the city decided to buy a Starbucks at a cost of $280,000, a franchise that now competes with local businesses.” Great, great use of our money, government!

“Clouds of tear gas wafted over downtown Montreal as riot police used billy clubs to slam their way through protesters who were blocking a public building. Some responded by tossing snowballs at officers… The scene in Montreal’s streets illustrated the increasingly bitter battle over fees, pitting the Charest government against those who deem the province’s rock-bottom tuition rates an inviolable right.”

The video is crazy. Even more so when you think Quebec’s tuition rates are the lowest in the country.

Wowsa. On every corner of Canada for sure, lol.

“Air Canada’s biggest union says it is threatening to strike just as the busy March Break travel season gets under way because its members are angry over what they consider the airline’s refusal to deal with wage and pension issues.”

Lol. Got any travel plans with Air Canada coming up…?

“First, unless shareholders and corporations resist the temptation to engage in short-termism, we run the risk of foregoing long-term sustainability and value creation… Second, unless an ethos of corporate social responsibility (CSR) truly becomes engrained in a for-profit corporation’s mission and purpose, that corporation runs the risk of becoming obsolete… Third, unless corporations adopt a more expansive view of what their purpose is in society (beyond profit maximization and enhancing shareholder value), we could be heading down the path of the Lorax.”

So much meaning jam-packed into an hour and a half of The Lorax. Lots to think about it. (But will any change actually happen?)

“Apple announced a new 4G LTE iPad featuring a 9.7-inch retina display Wednesday, following months of speculation about the company’s next big launch… The new iPad — which starts at $499 — has retina display, a 5-megapixel camera (with the same optics sensor from the iPhone 4S) and 1080p video recording. “[It has] text sharper than a newspaper. Photos will look incredible. Fonts look amazing,” said Phil Schiller, Apple’s SVP of worldwide marketing, during the event. “[It has] the best mobile display that has ever shipped.””

Of course it will be stunning but not worth my money, lol. Maybe I’ll win a free one like I did my current (old) iPad.

“Apple told Mashable that it was simply naming the device “iPad.” It was only calling it “new” in the context of the event — and to make clear the distinction between the latest model and the iPad 2, which hasn’t been discontinued.”

Lol. ‘New iPad’ did seem like a really stupid name.

“After Apple announced the new iPad Wednesday, the company dropped the price of its predecessor, the iPad 2, to start at $399. Previously the device had been sold starting at $499.”

Will you get it now?

Thanks for this great compilation, Mack! Last year I didn’t make it onto the list but this year I made two categories! #17th most replied to local user and #19th most active user using the #yeg hashtag. :)

“The largest solar storm in five years is racing toward Earth, threatening to unleash a torrent of charged particles that could disrupt power grids, GPS and airplane flights.”

I wonder what disruptions it shall cause…

“When at least 80 tornadoes rampaged across the United States, from the Midwest to the Gulf of Mexico, last Friday, it was more than is typically observed during the entire month of March, tracking firm AccuWeather.com reported on Monday. According to some climate scientists, such earlier-than-normal outbreaks of tornadoes, which typically peak in the spring, will become the norm as the planet warms.”

Here we are again, we’re responsible for destroying our planet and mankind. #bitter lol.

“A century after the Titanic disaster, scientists have found an unexpected culprit for the sinking: the moon. Anyone who knows history or has seen the blockbuster movies knows that the cause of the transatlantic liner’s accident 100 years ago next month was that it hit an iceberg. “But the lunar connection may explain how an unusually large number of icebergs got into the path of the Titanic,” said Donald Olson, a Texas State University physicist whose team of forensic astronomers examined the moon’s role.”

“Fellas, you’ve got a decision to make. If you want to look older and garner respect from other men, keep your beard. But if you want women to find you attractive, you should consider shaving. That’s the advice researchers from Canada and New Zealand are doling out in a new study on the appeal of beards.”

Lol. Silly studies. But I agree, facial hair on men is not that attractive.

“A year-old penguin that got away from a Tokyo aquarium remains at large and was last seen swimming in a river near the facility.”

Lol this headline cracks me up. Go penguin! (If it can survive out of a zoo setting).

This is tooooooo cute. <3 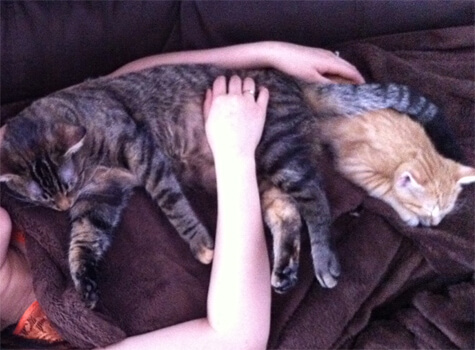 They run around and get exercise too… it’s just harder to take photos of that, lol.

Linda Hoang is a Canadian blogger based in Edmonton, Alberta, who writes about travel, food lifestyle and pet topics. She's also a seasoned social media/digital strategist with a journalism background. Linda loves exploring the world with her husband Mike, eating their way through cities, supporting local businesses, and photographing Instagrammable Walls. She is the founder of the Edmonton International Cat Festival and a fur-mom to two cats and two dogs.
PrevPreviousClicks of the Day: Tuesday, March 6, 2012 Edition!
NextClicks of the Day: Thursday, March 8, 2012 Edition!Next