“Federal Labour Minister Lisa Raitt stepped in Thursday to prevent a work stoppage at Air Canada that would have thrown the travel plans of thousands of families into chaos at the beginning of a holiday week… Raitt sent the dispute between the airline and two of its unions – the pilots and ground crew – to the Canadian Industrial Relations Board to see how a work stoppage would affect the health and safety of Canadians… While the board reviews the case, the airline cannot lock out its employees and the unions cannot start a strike.”

Lol. Workers and Air Canada are probably both getting fed up with Raitt stepping in every time they’re close to a strike/lockout.

“New rules to stop the “dirty work” some employment agencies engage in to bring temporary foreign workers to Alberta were rolled out by the provincial government on Thursday… Amendments to the regulation will explicitly state it’s illegal to mislead temporary foreign workers about their chances of becoming a Canadian citizen, or to intimidate or threaten individuals seeking work. Bhullar said employment agencies will have to keep better records of their transactions and register all their agents here and abroad.”

“A city councillor is slamming a website used to attract outsiders to the City of Champions. Coun. Kerry Diotte launched a small campaign recently that questions the more than $3 million that has gone into starting and running the Edmonton Stories website.”

It is kind of a waste of money…

“The earth may be in the grip of a solar storm the likes of which hasn’t been seen for years, but to look at Canada, you’d never know it. Officials say the volley of highly charged solar energy particles concentrated around the North Pole has barely registered on Canada’s power grids or satellite systems.”

Yeah today was not as destructive as I was thinking it could have been, lol.

“A Canadian-led team at the European nuclear research agency has succeeded in trapping particles of anti-matter long enough to measure how they react to increasing energy, in a groundbreaking experiment that heralds a new age of empirical research on the most bizarre stuff in existence.”

Cool. Hope it doesn’t implode and destroy everything, lol.

“On Wednesday night, ABC News reported that 70 percent of the ground beef we buy at the supermarket contains something former USDA scientist Gerald Zinstein calls “pink slime” … beef trimmings that once were only used in dog food… ‘It’s economic fraud’ … ‘It’s not fresh ground beef. … It’s a cheap substitute being added in.'”

Ughhh. What are putting in our bodies.

“Coca-Cola has announced it will change the colouring in its signature soft drink, after health authorities in California threatened to force the company to affix a “carcinogen” label to the beverage. The chemical in question is 4-methylimidazole, a component of the chemical stew that’s typically simplified down to “caramel colouring” on food labels. ‘Coke and Pepsi, with the acquiescence of the FDA, are needlessly exposing millions of Americans to a chemical that causes cancer,’ the Center for Science in the Public Interest wrote in a press release this week. ‘The colouring is completely cosmetic, adding nothing to the flavour of the product. If companies can make brown food colouring that is carcinogen-free, the industry should use that.'”

Geez. Yeah. We can deal with the different colour…

“United States authorities are investigating two Internet pharmacies with Winnipeg connections in the counterfeit drug scandal involving Avastin, where the drug’s cancer-fighting agents have been replaced with cleaning products.”

“Research scientists at the University of St Andrews in Scotland have claimed that just three weeks of eating fruit and vegetables will improve skin tone and radiate a ‘healthy glow.'”

“Early Sunday morning, clocks will spring ahead by one hour for Daylight Saving Time and researchers say that by Monday, sleepy employees will be less hard-working and will likely turn to the Internet to kill time. It’s called “cyberloafing” at work, researchers at Penn State, Virginia Tech and Singapore University say, and it dramatically increases the Monday after Daylight Saving Time kicks in compared to preceding and subsequent Mondays.”

Lol. My Monday is my weekend so I’ll be loafing around anyway ;)

“A company called Chamtech has developed a nano-capacitor-infused spray, a very powerful antenna in a can. To deploy it, just spray.”

Crazy. Yet not surprising. Expect more of these “crazy” breakthroughs to come. It is the world we live in now after all.

“Employers and colleges find the treasure-trove of personal information hiding behind password-protected accounts and privacy walls just too tempting, and some are demanding full access from job applicants and student athletes. In Maryland, job seekers applying to the state’s Department of Corrections have been asked during interviews to log into their accounts and let an interviewer watch while the potential employee clicks through wall posts, friends, photos and anything else that might be found behind the privacy wall. Previously, applicants were asked to surrender their user name and password.”

This is ridiculous. Completely unfair. Though I don’t really have anything to hide – it’s the principal of the matter that counts. Complete violation…

“In this year’s annual Pwn2Own battle of browser-hacking prowess, Google Chrome was the first to fall–and in the first five minutes of the competition.”

“According to a report in USA Today, many employers are getting rid of unpaid internships or converting them to paid programs because they’re getting hit with lawsuits that claim interns should be compensated for the work they do. Labor lawyers tell the newspaper that companies are not willing to run the risk of offering them.”

That’s great. I have been very fortunate with the internships I’ve had in the past – have all been paid for the most part!

“I am reliably told that NBC and Matt Lauer are closing in on a deal that will pay him an estimated $25 million per year over the course of a multiyear deal, possibly as many as three, but more likely two.”

Ah, big shot broadcasters and the ridiculous amounts of money they get. #MustBeNice (I love Matt Lauer though! lol)

“With phones capable of taking high-resolution pictures and always at the ready, what would compel a teenager to carry a separate camera? That was the starting point for Artefact’s revolutionary new camera concept–Meme, a wearable accessory slightly larger than an iPod Nano that takes photos with a click of a button and displays the results on an artsy grayscale screen, allowing users to share moments right as they happen.”

Hmmm. The next big thing?

“Five US publishers are being threatened with legal action over the way they set prices for electronic books, reports the Wall Street Journal. The US Department of Justice (DoJ) said the five had conspired to raise the prices of ebooks. The row has blown up because electronic books are sold according to a different formula to that which governs the sales of physical books.”

“Pottermore, a website based on J.K. Rowling’s best-selling series and subsequent feature films, will open in April, according to the website’s official blog.”

“The iPhone and iPad will will feature “all the classic and iconic elements of Archie’s world, from Riverdale High to his two love interests, Betty and Veronica — not to mention friends and foes like Reggie, Jughead and more.” The game will be story-based and engaging for players, and also will be cross platform and free.”

This is so awesome!! I was a huge Archie comics fan growing up! I can’t wait for this to come out!

“In celebration of its centennial birthday, Oreo is unveiling a new print campaign that pays tribute to some of the most significant achievements of the past 100 years. Yes, to answer your question, one of those achievements is, in fact, the emoticon.”

“Tights for men, known as mantyhose, are surging in popularity, not only as an alternative to long-johns for keeping warm, but as a fashion statement. It’s not really surprising as men have been wearing hosiery since the Middle Ages.”

Well it is still surprising at first but I guess when you compare it historically it brings it down a notch. Still weird though…

“An earnest review of the new location of Olive Garden in Grand Forks, N.D. went viral this week — much to the surprise of the restaurant and its writer, longtime Grand Forks Herald columnist Marilyn Hagerty. The review has attracted notice for Hagerty’s unbridled enthusiasm for the restaurant. She orders just chicken Alfredo (“comforting on a cold day”) and a water, but still manages to wax rhapsodic. She’s especially struck by the Olive Garden’s “impressive” decor. “All in all, it is the largest and most beautiful restaurant now operating in Grand Forks,” she writes.”

LOL. Ouch!!!! The perils of getting the truth! 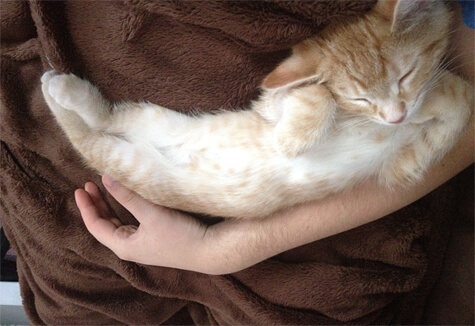 Linda Hoang is a Canadian blogger based in Edmonton, Alberta, who writes about travel, food, lifestyle and pet topics. She's also a seasoned social media/digital strategist with a journalism background, the founder of the Edmonton International Cat Festival and co-founder of Stop Race Based Hate, an online anti-racism education tool. Linda loves exploring the world with her partner Mike, eating their way through cities, supporting local businesses, and photographing Instagrammable Walls. Linda is a fur-mom to two cats and two dogs.
PrevPreviousClicks of the Day: Wednesday, March 7, 2012 Edition!
NextAttention Foodies: Eat Alberta 2012Next