“Edmonton is booming with bed bugs. They arrived almost a decade ago and getting rid of the pests will not be easy. Through an an access to information request filed by globalnews.ca, we have set up an interactive map below to let you see where the worst infestations have taken hold. Just 5 years after arriving in the city, infestations north of downtown were the worst in all of Alberta.”

I’m still surprised that the apartment Mike and I lived in last year had no bed bugs, given how they appear to be in so many…

“Now, after four years of denying that it broke the rules on election spending during the 2006 campaign, the federal Conservative Party has admitted that it overspent on ads in the vote that brought Harper to power. On Thursday, the party and its fundraising arm pleaded guilty of spending more than the $18.3-million legal limit and of filing an election return that failed to report all the expenses it incurred.”

“Five years after unveiling a proposal to end consumer confusion over “whole wheat” claims on bread products, Health Canada now says it has no plans to change the food-labelling rule… Studies linking the consumption of whole grains with a lower risk of obesity, cardiovascular disease and diabetes have made whole grains popular among health-conscious shoppers. But when grains are refined, the nutrient-packed germ and bran are gone — undermining the disease-fighting potential.”

“They’re annoying and have dozens of “cures” that vary, but an Ontario researcher says there’s a concrete reason why people get the hiccups. The odd and bothersome reflex often has resulted in confusion about its purpose, but Dr. Daniel Howes of Kingston, Ont., said it goes back to our earliest days and the need for babies to get enough milk.”

“According to a new study, the benefits of eating fish go beyond heart health: A higher intake of omega-3 fatty acids can slow brain aging and improve memory and thinking skills.”

“Canada may be in the grips of an obesity epidemic but doctors are advising “surprisingly few” overweight or obese Canadians to lose weight, a national survey finds. Less than a third of overweight people who responded to the survey had ever been advised to lose weight by a physician, without specifically asking.”

Time to be straight up with people!

“A headless robot dubbed “Cheetah” has set a new world speed record, according to its owners. The US Defense Advanced Research Projects Agency said the four-legged machine achieved 18mph (29km/h) on a laboratory treadmill… the project was part of efforts to develop robots designed to ‘more effectively assist war fighters across a greater range of missions.'”

Sure sounds like this robotic cheetah will one day be part of the destruction of mankind, lol.

“Six suspected leaders of the international hacking organization known as Anonymous were charged by U.S. authorities of computer crimes, dealing a major blow to the loose-knit group that has wreaked havoc on the websites of government agencies and major corporations.”

“With Wednesday’s launch of the iPad HD now pretty much a forgone conclusion, a report has surfaced of a mysterious “Apple Store event” planned for Friday, March 16. 9to5Mac cites an ‘Apple Store source who has been reliable in the past’ for a speculative report about an announcement that day. ‘Naturally, this points to an iPad 3 launch on the Friday just nine days after tomorrow’s announcement.'”

“If you’re a fan of Instagram and Pinterest, then get ready to fall in love with Pingram. Modeled after Pinterest, the site allows you to view Instagram photos in the same way you might browse through pins on Pinterest… Much like on Instagram, you can browse through the photos of people you’re following on Pingram and check out a feed of the top photos of the moment. Where the fun comes in is Pingram’s Pinterest functionality. If you see a photo you like (or just want to share your own snapshots), you can pin pictures to Pinterest directly from the site.”

Interesting!! I do love both…

“A second radio station has dropped Rush Limbaugh’s talk show in reaction to his derisive comments about a Georgetown law student advocating that birth control be covered by the Jesuit university’s health care plan… Limbaugh called Georgetown University student Sandra Fluke a “slut” and a “prostitute” last week after she urged lawmakers consider the importance of contraception coverage in their discussion of national health care policy. He apologized to Fluke on Saturday in writing and discussed it on the air Monday… That was too little, too late for many. A slew of advertisers have left the show and at least one other radio station, KPUA in Hilo, Hawaii, has stopped airing it.”

“It might look like a scene from a scary movie, but these spiders are actually crawling outdoors in Australia. They’re suspended in the air, their webs woven on sticks on a bush.”

“A video of a dog singing and playing the piano has become the latest viral sensation after it was posted on YouTube where it’s been seen by nearly a million viewers.” 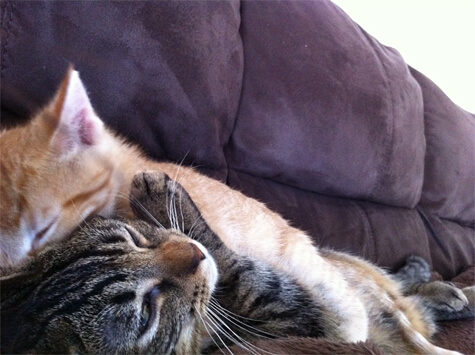 Loki decided to attack Thor while she was napping on me today, lol.

Linda Hoang is a Canadian blogger based in Edmonton, Alberta, who writes about travel, food lifestyle and pet topics. She's also a seasoned social media/digital strategist with a journalism background. Linda loves exploring the world with her husband Mike, eating their way through cities, supporting local businesses, and photographing Instagrammable Walls. She is the founder of the Edmonton International Cat Festival and a fur-mom to two cats and two dogs.
PrevPreviousReview: Tres Carnales Taqueria
NextClicks of the Day: Wednesday, March 7, 2012 Edition!Next