Will you rent TV shows off of Facebook? Myself, probably not.

Ah. Dinosaur theories are so fascinating.

You would think at least the people who tried contacting him via Facebook would see that he’s clearly not a young, white girl but in fact an older, black man. lol. Not the brightest stalkers.

“Given that situations involving the undernourishment of children have frequently been defined as child abuse or neglect and warranted state intervention, it may be likely that overnourishment may be addressed similarly.” Very interesting argument!

A crazy, interesting read on the rise and fall of one of Canada’s favourite companies. Because it is indeed falling. #APPLEFOREVER.

Absolutely stunning photos of our galaxy.

I was reading and interested in reading well before the Harry Potter books came out but I definitely agree with Spartz. Also as a side note: I am so jealous of this man – creating Mugglenet when he was just 12. I created forums when I was 12 too but it was for obscure Korean pop musicians. THAT DIDN’T GET ME ANYWHERE!

I have read quite a bit of Kai Nagata-related blog posts/columns/tweets this week. Pretty interesting stuff, lots of insight from both Kai and from responding journos. Whether you agree or disagree, J Source sums it up nicely in this sentence: “one thing is for sure: the media, and media criticism, is still a hot topic in Canada.”

^_^ That’s why it was the best thing that ever happened to Mike when he met me! Muaha.

I love infographics!! Will be interested to see how often I use this website once the server can actually handle it, lol. I tried to turn my Twitter stats into an infographic but the website took way too long :( Overcapacitated.

This is adorable! It’s not new but I spotted it on Twitter today. What an awesome friendship.

But now that will be inaccurate for people who watch that episode after October! LOL.

“This Generation Y is probably going to be much better off than any previous generation. Their bargaining power (with employers) will be much higher than any other generation. Their wages will be higher. They are frighteningly calculating.” True/False?

“By enabling a new class of iOS app, destined for your TV, Apple could add even more energy to the already-sizzling App Store. By adding a more sophisticated OS, and possibly faster chips, Apple could enable a whole new gaming market, too, one to rival big players like Sony and Nintendo with much cheaper hardware.”

This would be wonderful. I have never had much of an interest in Apple TV at its current state.

Lol, this is too cute.

What a sad story. I don’t think the dogs should be put down :( The owners were already dead they were just doing what they had to do to survive :(

Apparently Canadians are skeptics. Mike and I believe in extraterrestrials!

Meant to include this in previous Clicks of the Day but this week’s Media roundup from Mack also poses an interesting question at the end – about how many people actually like these “link”/”note”, round-up kind of blog posts. There appear to be a lot of them done by Edmontonians. I know that people do enjoy my Clicks of the Day despite not commenting (lol). What do you guys think? (Maybe you’ll actually comment this time?)

Lol Thor doesn’t have a social networking site yet :)

I haven’t watched this because Mike and I are doing it the long way – watching all 7 movies before the final movie. But I figured it’d be worth a view for anyone whose not planning on sitting through 3 hours x 7 movies worth of HP. lol 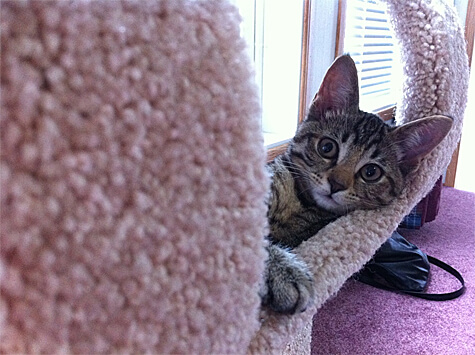 She is so smart, totally knows when her photo is being taken.

Linda Hoang is a Canadian blogger based in Edmonton, Alberta, who writes about travel, food lifestyle and pet topics. She's also a seasoned social media/digital strategist with a journalism background. Linda loves exploring the world with her husband Mike, eating their way through cities, supporting local businesses, and photographing Instagrammable Walls. She is the founder of the Edmonton International Cat Festival and a fur-mom to two cats and two dogs.
PrevPreviousClicks of the Day: Tuesday, July 12, 2011 Edition!
NextClicks of the Day: Thursday, July 14, 2011 Edition!Next