Yikes… especially “compared with a profit of $40.6-million one year ago.” Brutal!

Unfortunate. I find stories from beat reporters are that much more insightful and informative than ones from general assignment ones.

I do not want to think about the scary, unexpected consequences of breeding “Super” Bees. Humans must stop playing God.

I think that’s very cool :) Last summer I got a freelance videography/editing gig via Twitter. It works! It’s good!

I can’t imagine spending that much time flying lol.

Not surprising computer use has spiked.

E-receipts is most interesting.

I think this is crazy lol. Coming from someone who loves Twitter and social media and companies/businesses adapting to it. I just don’t think 140 characters can replace an essay! Interesting idea though.

Hmm. I don’t know, I feel like this could be another Google project fad/fail lol. Which leads into:

So will Plus be a part of this timeline in the future?

“Instead of the model of individual success and standardized test taking that currently exists in schools, the education approaches they’ve found best foster imagination also teach kids to collaborate to solve problems.”

SCARY. Mike and I used to live in an apartment literally just across the street from this one… Apartment fire had always been one of my fears.

Why didn’t the person filming scream??!! (Unless it was just a camera hooked up to the rollercoaster). But yikes, at 1:58 is the scariest.

“The Facebook search warrants typically demand a user’s “Neoprint” and “Photoprint” — terms that Facebook has used to describe a detailed package of profile and photo information that is not even available to users themselves.” I wonder if they’ll open that kind of thing up to journalists too.

I had meant to post this with the Weekend clicks because I ran this story as a kicker package in our Saturday night segment! Quidditch is heating up in the States!! So awesome and slightly funny, LOL.

The movies will never compare to the books but now that I’ve been re-watching the films in preparation for the final one, I’m finding them quite enjoyable and the acting less terrible than I had originally thought :)

I got the unofficial Harry Potter cook book for my Kindle today. It was free! On account of Pottermania this week. Tee hee. Turns out the recipes aren’t that cool though, lol but whatever it was free. 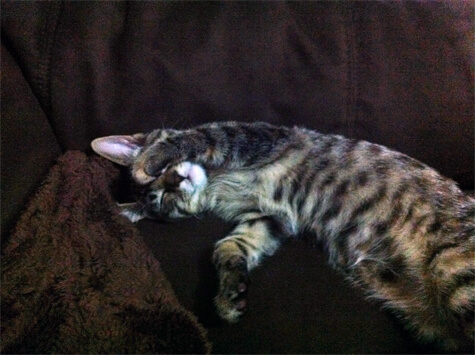 She really knows how to sleep!

Linda Hoang is a Canadian blogger based in Edmonton, Alberta, who writes about travel, food lifestyle and pet topics. She's also a seasoned social media/digital strategist with a journalism background. Linda loves exploring the world with her husband Mike, eating their way through cities, supporting local businesses, and photographing Instagrammable Walls. She is the founder of the Edmonton International Cat Festival and a fur-mom to two cats and two dogs.
PrevPreviousClicks of the Day: Monday, July 11, 2011 Edition!
NextClicks of the Day: Wednesday, July 13, 2011 Edition!Next