“In an effort to curb illegal activity in the downtown core, Edmonton police have carried out an undercover drug operation – and laid more than one hundred charges. After a six-week focused drug operation, 30 people were arrested, and now face 155 charges related to drug trafficking.”

My commute is excellent ! :)

“Some drivers may be left fuming if the city makes the move to a new parking meter system that allows for higher rates at popular destinations. And the proposed switch to the so-called “smart” parking meters could also put the brakes on free on-street parking after 6 p.m.”

That would be very upsetting.

“Other politicians across the country aren’t pleased after hearing his Stampede declaration.”

“For the first time ever, Alberta will bury millions tonnes of carbon dioxide from upgraded oilsands bitumen. Under Shell Canada Ltd.’s Quest carbon capture and storage project, more than a million tonnes of CO2 will be captured from Fort Saskatchewan’s Scotford Upgrader and stored deep underground every year. The Energy Resources Conservation Board (ERCB) recommended the Quest project, aimed at reducing carbon dioxide levels believed to have a harmful greenhouse effect on the atmosphere.”

Hmm.. Good right? I am not all that educated on carbon capture techniques. Although storing it deep underground makes me wonder how safe it would be for the underground.

“An explosion in the electrical room in Calgary’s Shaw Building took out 911 service for up to 30,000 landline customers and disrupted Internet, cable and local radio stations.”

“The captain of the shipwrecked Costa Concordia said in an interview broadcast Tuesday that he was distracted by a phone conversation shortly before the cruise liner crashed into a reef off an Italian island and capsized, killing 32 people. Francesco Schettino described the collision to private Italian TV channel Canale 5 as a “banal accident” in which “destiny” played a role.”

“Dozens of men and women took to the streets of Kabul on Wednesday to protest the recent public slaying of an Afghan woman accused of adultery whose brutal, execution-style killing was captured on video… It was a reminder that girls and women still suffer shocking abuse in Afghanistan, but the protest also indicated that people’s views on women’s rights here could be slowly changing.”

Sad story. We are so lucky in Canada.

“The BBC has learned that a patient has been diagnosed with cholera in the Cuban capital, Havana, days after three people died in a rare outbreak in the south-eastern town of Manzanillo. More than 50 people were infected and about 1,000 have received medical attention.”

“Researchers in Canada have found that for every million doses of the H1N1 pandemic vaccine that were administered in 2009/10 there were two extra cases of Guillain-Barré syndrome which can be fatal in extreme cases. The benefits of vaccination still outweighed the risks, they concluded as the risk of death from H1N1 in the region was one in 2,500. It was found the increased risk was between 12 per cent and three fold, due to small numbers involved.”

“A new study from Finland suggests babies who grow up with pets, especially dogs, are not as likely to develop colds and other respiratory infections by the time they reach one year old.”

“If you run a video website in China, you will now be charged with a daunting task: watch all your content and censor out any questionable content before posting… Chinese video websites can be held legally liable if they fail to comply with the self-screening and censorship policy.”

“Some of the 12,400 phone kiosks across the city will be spruced up for use as more than toilets of the homeless–instead, you’ll be able to tap into the rusted, fecal totems for gloriously free WiFi. The program will eventually extend to all five boroughs, says the Department of Information Technology & Telecommunications.”

“Amazon has announced GameCircle, a platform that comes with some of the features found in Apple’s Game Center. Designed for the Amazon Kindle Fire, GameCircle will attempt to engage players by tracking their achievements and delivering a leaderboard to see how they stack up against other folks. In addition, Amazon says GameCircle supports a syncing function that lets users save in-game progress to the cloud and pick up where they left off after restoring their tablet or switching to a different device.”

“So you’ve spent 15 years amassing what might be the most impressive collection of rare video games on the entire planet. What do you do now? Sell it to a Canadian. For $1.25 million dollars. No, that’s not a typo. A 32-year-old video game enthusiast in France put his entire collection of roughly 7,000 old-school game cartridges and discs up for auction on eBay, asking a cool one million Euros for the lot (about $1,247,775 in Canuck-bucks, plus an extra $1,250 for shipping.) And it sold, at least provisionally, to a man in Quebec.”

“A volcanic eruption some 579 million years ago buried and fossilized a “nursery” of the some of the world’s earliest animals, British scientists say. Researchers from the universities of Oxford and Cambridge, in collaboration with the Memorial University of Newfoundland, discovered more than 100 fossils in Newfoundland rocks of what are believed to be “baby” rangeomorphs, bizarre frond-shaped organisms that lived 580 million to 550 million years ago that were unlike any creature alive today.”

“A woman said she kept the dead body of her companion in a chair in their southern Michigan house for months because she didn’t want to be alone.
Linda Chase, 72, said she kept the remains of Charles Zigler clean and dressed and talked to the body while watching NASCAR on television.”

“The death of a rare newborn Giant Panda at Tokyo’s oldest zoo has interrupted regular TV programming and sent shock waves across Japan. The unnamed male cub, weighing just 144 grams, was found lying on its back against his mother’s stomach early this morning. The Globe and Mail says the zoo issued a statement saying “they administered cardiac massage and other treatment but they confirmed the death at 8:30am.” It is believed to have died of pneumonia when being fed by its mother Shin Shin and milk got into his lung.”

“Thanks to Reddit user dmonnens, the world gets to see these heartwarming photos of a dog who, according to the thread, adopted a baby chimpanzee after its mother died at a zoo. Since the dog had just given birth, it was able to raise the baby chimp with her litter of puppies.”

“When the duo stumbled across a duffel bag containing 20,000 Brazilian Reais ($9,831) at 3:30 a.m. Sunday, Folha de S.Paulo reports they decided to do the right thing and turn it over to police. Santos found the bag near a bus station when he and his wife went to investigate why a nearby shop’s fire alarm had gone off. Though they could desperately use the funds, they never considered taking the money. “I learned from my mother to never take anything that belongs to others,” he told TV Globo.”

“Move over, Cannes, Minneapolis might just be home to the greatest film festival ever. On August 30, feline aficionados will have the chance to laugh in unison with others at the first-ever Internet Cat Video Film Festival. Viral videos of cats doing their thing will be projected on a building wall near the Walker Arts Center in Minneapolis, KARE 11 reports. Leading up to the festival, people have the chance to submit their favorite clips through the festival’s nomination form. The submission period will close on July 30.” 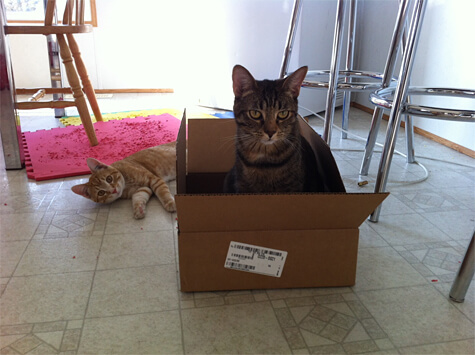 Thor got a new box to play in today! Loki’s not allowed in, lol.

Linda Hoang is a Canadian blogger based in Edmonton, Alberta, who writes about travel, food lifestyle and pet topics. She's also a seasoned social media/digital strategist with a journalism background. Linda loves exploring the world with her husband Mike, eating their way through cities, supporting local businesses, and photographing Instagrammable Walls. She is the founder of the Edmonton International Cat Festival and a fur-mom to two cats and two dogs.
PrevPreviousClicks of the Day: Tuesday, July 10, 2012 Edition!
NextClicks of the Day: Monday, July 16, 2012 Edition!Next