“While Alberta Transportation officials had hoped to have the rest of Highway 16 re-opened by Monday evening, CTV News has learned the major road will not open until late Tuesday morning, at the earliest. Crews have been working to clear water from a portion of the highway – after heavy rains dislodged a culvert and flooded the road.”

What a mess this caused! Also… it’s crazy how our city (and areas around the city) is just destroyed after rainfall…

“Despite reports of almost 200 basement floods because of Sunday’s steady downfall, the director of the city’s drainage department doubts the recent rains will prompt a request for help from the province’s disaster recovery program. “I don’t think that this storm warrants that type of action,” said Derek Melmoth, director of Edmonton’s drainage operations, admitting he doesn’t make the ultimate decision to apply on behalf of city residents for relief from Alberta’s Disaster Recovery Program. That program provides funding for flooding damage that isn’t covered by insurance, such as seepage of surface water into basements through foundation cracks or over window wells. Insurance only covers sewage backup. “It got kicked in in 2004 because we had 4,500 basement floodings.””

I feel so bad for those affected by flooding! Boo. Hope their insurance covers it. (Still sad to have to throw out your things though).

“A young man is dead after being struck by a limousine on Edmonton’s south side early Monday morning.”

Very sad. Lots of pedestrian deaths lately (it feels like).

“The owner of a wallaby that went missing last year is hopeful she may be soon reunited with her furry friend, after the wallaby was recently spotted in Parkland County.”

Such a cute wallaby… especially the pictures with the CAT! :) I hope he is reunited with his owner soon.

“More human remains were found Monday under a field of debris at the site of a landslide that washed away three homes in southeastern British Columbia late last week. RCMP confirmed the news Monday, a day after more remains were found as crews sifted through debris near the Johnsons Landing home belonging to Val Webber, one of four people who went missing after the slide.”

“The most intense clashes seen in Damascus since the start of the Syrian uprising flared on Monday as loyalist units and guerilla forces battled near the city centre.”

How has serious action not been taken against Assad yet?! Every day more die.

“Sea piracy fell 54 per cent worldwide in the first half of 2012, led by a dramatic drop in Somali piracy, an international maritime watchdog said Monday.”

“Angry they were deceived by a doctor they thought they could trust, former patients of a suspended Colorado dentist who allegedly used dirty needles on patients for over 12 years are now being urged to get testing for HIV and Hepatitis.”

“The federal government announced Friday it will appeal last month’s British Columbia court ruling that struck down Canada’s laws banning doctor-assisted suicides. Attorney General Rob Nicholson says the government believes that the Criminal Code provisions that prohibit medical professionals and others from providing assistance in a suicide are constitutionally valid.”

“Canadian researchers have found that every hour of TV that two- to four-year-olds watch contributes to their waist sizes and their ability to perform in sports by the end of grade 4. Lots of studies have linked excessive TV watching with childhood obesity. But this study is the first to look at how time in front of the TV affects kids’ strength, using a test called the standing long jump, which is a good measure of something called “explosive leg strength.””

All these studies just hate TV viewing don’t they.

“Seven hours — not more and not less — appears to be the magic number when it comes to how much sleep we need to keep our brains sharp and possibly avoid mental decline or even Alzheimer’s disease, according to the researchers of new studies presented in Vancouver Monday.”

My average is ten, lol.

“New research suggests that the promotion of breastfeeding to women could provide a long-term reduction in obesity rates… According to NBC News, when the data was reviewed it was found that women who breastfed their children were found to have a lower body mass index (BMI) on average than those who did not. The research also demonstrated that for every six months that a woman had breastfed, her BMI was on average one per cent lower compared with women who did not breast feed their children.”

“Imagine the ability to delete all digital evidence of an offensive blog post, photos of last weekend’s out-of-control party, or video of a regrettable prank you pulled years ago… Web users around the world may soon be able to exercise this so-called “right to be forgotten,” the power to selectively erase one’s self from the Internet, thanks to a European directive that argues users should have total control over their online data.”

“A new study has found that YouTube has become a major platform for news, one where viewers are turning for eyewitness videos in times of major events and natural disasters… “There’s a new form of video journalism on this platform,” said Amy Mitchell, deputy director of the Pew Research Center’s Project for Excellence in Journalism. “It’s a form in which the relationship between news organizations and citizens is more dynamic and more multiverse than we’ve seen in most other platforms before.” More than a third of the most-watched videos came from citizens. Than more half came from news organizations, but footage in those videos sometimes incorporated footage shot by YouTube users.”

Cool. Hopefully that relationship continues to grow and get better!

“Google’s first female engineer, Marissa Mayer, has made a career out of bucking expectations — and she did so once again on Monday by announcing she will leave Google to be the new CEO of Yahoo, the struggling company that once was Google’s main competitor.”

“New versions of Microsoft’s word processing, spreadsheet and email programs will sport touch-based controls and emphasize Internet storage to reflect an industry-wide shift away from the company’s strengths in desktop and laptop computers. The new offerings appear designed to help Microsoft retain an important source of revenue as more people access documents from mobile devices. The new Office suite also reflects the fact that people tend to work from multiple computers – perhaps a desktop in the office, a laptop at home and a tablet computer on a train and a smartphone at the doctor’s office.”

Will have to try it firsthand to see how I like it.

“Before the $1 billion sale to Facebook, before the 575 likes per second, before the 30 million registered users…there was this Instagram photo of a foot and a dog. The shot was featured in a blog post on Monday by Instagram HQ, celebrating two years to the day of the first photo uploaded to the photo-sharing network’s precursor, Codename. Fast forward a couple years, and feet and dogs have become Instagram mainstays along with cats, brunch and bridges.”

“Just when you thought Apple was really starting to go green—announcing plans to power its newest data center largely with renewable energy—the tech company took a big step backward last week, requesting that all of its products be removed from EPEAT, a registry of environmentally friendly electronics. What’s really strange is that Apple helped start EPEAT back in 2006, and now it’s just backing out without much of an explanation. But while it’s unclear why Apple seems to be moving away from green devices, the unfailingly green city of San Francisco has taken notice. Officials announced earlier this week that city agencies will no longer be allowed to purchase Apple desktops and laptops, at least without going through an onerous waiver application process.”

“Tim Hortons has been downgraded to a “sell” rating at Goldman Sachs over concerns that moderation in same-store sales could be harbinger of more pressure in the hyper-competitive coffee market. A note from analyst Michael Kelter at the Wall Street investment firm says he is concerned about early indications of “impending Canadian saturation” that could reflect increased pressure.”

“If you’ve ever wanted to buy some really instant mashed potatoes, someday soon you might be able to purchase it at your local 7-Eleven. Reportedly, the convenience chain has launched mashed potatoes that come out of a Slurpee-like machine.”

Some interesting points / alternatives but I just don’t want to get married that way, lol.

“For the first time since intelligence testing began more than a century ago, women have beaten men in the tests, according to one of the foremost experts on IQ tests.”

“A small company is trying to bring to market a genetically engineered apple that does not turn brown when sliced or bruised. But it has much of the rest of the apple industry seeing red.”

Ughhhh. We’re all going to be mutated in the future eating genetically-modified food – the future of our food. More genetic modification concerns:

“A company called Oxitec plans to release 5,000 to 10,000 genetically modified mosquitoes to fight the native population of mosquitoes in Key West, Florida. But residents are protesting that the potential harmful effects of the mosquitoes are uncertain.”

Blah. Are the risks worth the potential benefits?

“The mayor of a sleepy Alaska town is feline fine. The part-Manx cat clawed his way onto the political scene of Talkeetna, Alaska, through a write-in campaign shortly after he was born 15 years ago. KTUU-TV reported Friday that residents didn’t like the mayoral candidates years ago, so they encouraged enough people to elect Stubbs as a write-in candidate. The town has nearly 900 residents.”

“Pancake the kitten takes on Sugar Tree the Doberman.”

Oh my gosh!! Bravest cat ever! So cute.

“When an adorable kitten battles his reflection, the real winner is the viewer.”

Cats do the darndest things!!!

“A video of a little Russian girl carrying a fat cat being menaced by a raucous, riled-up “monster puppy” to the safety of her home has gone viral.”

Lol. What a mean puppy. Also, what a fat cat! 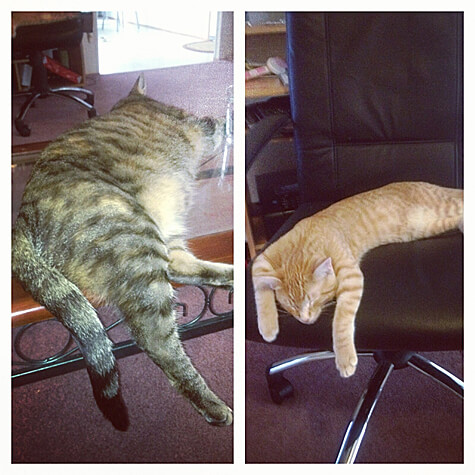 Our cats have got to be the laziest out there!!

Linda Hoang is a Canadian blogger based in Edmonton, Alberta, who writes about travel, food, lifestyle and pet topics. She's also a seasoned social media/digital strategist with a journalism background, the founder of the Edmonton International Cat Festival and co-founder of Stop Race Based Hate, an online anti-racism education tool. Linda loves exploring the world with her partner Mike, eating their way through cities, supporting local businesses, and photographing Instagrammable Walls. Linda is a fur-mom to two cats and two dogs.
PrevPreviousClicks of the Day: Wednesday, July 11, 2012 Edition!
NextSocial Media Column: Flood of retweets helps homelessNext