“The beauty about cash mobs (which are taking place in cities all around the world) is that they’re organized primarily through social media. In Edmonton’s case, the local business that’s mobbed is suggested by Edmontonians on Facebook. Word about where and when a mob will take place is also primarily advertised through Facebook and Twitter. In some cases of very impromptu mobs, notice is given to Facebook fans and tweeple just days in advance and Edmontonians still show up.”

“The Alberta Energy System Operator said a new summer record for demand of 9,885 megawatts set at 2 p.m. Monday was all part of a coincidence that prompted it to tell providers to shut ‘er down in some neighbourhoods across the province for only the second time in a decade. The kicker is that as it stands, Albertans may never know why. On Tuesday, EPCOR said they wouldn’t release the number of Edmontonians affected by rolling blackouts Monday — or the locations affected — for security and market reasons. Just what shut down six out of 35 generators down in a record scorching heat wave will also remain under wraps.”

Not telling the public is really not okay…

“A day after energy providers enacted rolling blackouts throughout the province, in an attempt to cut power usage – city officials are wondering why there was no warning… City officials and police said they were not warned the blackouts were to be enacted. “It’s unacceptable,” Mayor Stephen Mandel said. “We’ll have to find out what happened and what went wrong.” “Certainly, there could’ve been much better communication from EPCOR to our administration,” Councillor Tony Caterina said.”

Add ‘Edmontonians/Albertans’ in general to that list of people who were unimpressed.

“People are being asked to vote on the final six monikers vying to replace Capital Ex for Edmonton’s summer fair, and one suggestion has a familiar ring. The names, released Tuesday by Northlands, include K-Days — the shortened version of Klondike Days, the fair’s name until 2006. Rounding out the top six are EdFest, The Edmonton Exhibition, Edmonton Summer Exhibition, River City Festival and River City Summer Fair.”

Pretty uninspiring choices if you ask me… (and most people)

“Police were called to a northside Wal-Mart Sunday after a three-year-old was left locked in a hot, unattended car… Josh Steep, who was passing by around 9 p.m., noticed the child and was concerned because of the 30C highs so he did the only thing he could think of, he called the police.”

Why… why why people. Why are you leaving children and pets in cars in this weather. Why!!!

“Hundreds of scientists gathered on Parliament Hill Tuesday, wearing lab coats and denouncing the government for funding cuts they say will result in the “death” of evidence. During the event, which was billed as a funeral procession for the truth, scientists chanted: “No democracy, no evidence, no science, no truth.” The scientists says that cuts to federal research programs will impede their ability to do research in such key areas as the environment, First Nations, climate change and the national census.”

“Getting regular exercise is obviously an important part of staying healthy. But what about what we do with the rest of our time? A new study suggests that the time we all spend sitting is taking years off life expectancy in the U.S. Scientists are just beginning to investigate how sitting affects health, and early evidence has linked an excess of sitting time to all kinds of chronic maladies, particularly heart disease, diabetes and cancer. Now, a new analysis published in the British Medical Journal suggests that the life expectancy of the entire U.S. population could increase if Americans simply reduce the time they reduce channel-surfing on the sofa.”

Not the first time there’s been articles about this but it still won’t change many people’s lifestyles!

“Data has shown that uncircumcised boys have a 10-fold higher risk of getting a urinary tract infection (UTI), compared to those who have had their foreskins removed.”

“More than 100,000 women a year could be saved from dying prematurely simply by improving their access to family planning information and contraception, according to a new study. The study appears in the British medical journal The Lancet, which has devoted all of this week’s issue to the topic of family planning. The issue was released ahead of the London Summit on Family Planning, a major meeting hosted by the Bill & Melinda Gates Foundation that aims to bring together participants from across the world to discuss the rights of women and girls to access contraception.”

Contraception for all! Sounds good.

“Research In Motion executives faced a slew of questions, but no fireworks at the company’s annual shareholders’ meeting Tuesday, as they warned of more “difficult” times ahead. Coming just two weeks after RIM announced a US$518-million loss in its latest quarterly results and unveiled plans to cut some 5,000 job cuts as a result, RIM board chair Barbara Stymiest said the company is nevertheless poised to turn its fortunes around.”

“Just months after announcing a broad restructuring that centralized production of its newspapers and led to job losses at papers across the country, Postmedia Network Canada Corp. said it will cut deeper in hopes of reinventing itself as a profitable digital company. In late May, the publisher of such titles as the National Post and Calgary Herald said it would eliminate editing at its local newspapers in favour of a central facility in Hamilton, Ont., close its wire service and stop printing Sunday papers in some markets in a bid to save up to $40-million. It turns out the cuts were just the first phase in a broader three-year plan meant to reduce the company’s reliance on print advertising and prepare it for a digital future.”

“Google is poised to pay a $22.5 million fine to resolve allegations that it broke a privacy promise by secretly tracking millions of Web surfers who rely on Apple’s Safari browser, according to a person familiar with settlement.”

“Reggae immortal Bob Marley has joined Barack Obama and Elvis Presley in the elite club of those who have biological species named in their honor. In Marley’s case, it’s a small parasitic crustacean blood feeder that infests fish in Caribbean coral reefs, now known as Gnathia marleyi.”

“Climate change researchers have been able to attribute recent examples of extreme weather to the effects of human activity on the planet’s climate systems for the first time, marking a major step forward in climate research. The findings make it much more likely that we will soon – within the next few years – be able to discern whether the extremely wet and cold summer and spring so far experienced in the UK this year are attributable to human causes rather than luck, according to the researchers.”

“Cookie Monster sings his own spoof of the internet’s current favorite song (Sorry, Sexy and I Know It) ‘Call Me Maybe’, called ‘Share It Maybe’”

Lol so many parodies. This one is pretty good. :) 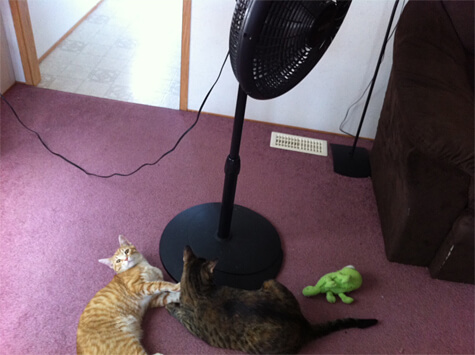 We’re all just sweating away. No AC in the house. Just these fans.

Linda Hoang is a Canadian blogger based in Edmonton, Alberta, who writes about travel, food, lifestyle and pet topics. She's also a seasoned social media/digital strategist with a journalism background, the founder of the Edmonton International Cat Festival and co-founder of Stop Race Based Hate, an online anti-racism education tool. Linda loves exploring the world with her partner Mike, eating their way through cities, supporting local businesses, and photographing Instagrammable Walls. Linda is a fur-mom to two cats and two dogs.
PrevPreviousSocial Media Column: ‘Cash mobs’ boost for local economy
NextClicks of the Day: Wednesday, July 11, 2012 Edition!Next