Welcome to Wednesday, February 8 2012’s Clicks of the Day!

“Alberta claimed the title as Canada’s fastest growing province on Wednesday as Statistics Canada released the first look at the 2011 census results… The province can also lay claim to Canada’s fastest growing major cities, also called census metropolitan areas. Calgary grew to 1.2 million residents at a rate of 12.6 per cent, while Edmonton raced behind to 1.15 million at a rate of 12.1 per cent. Both were far above the national average of 5.9 per cent.”

Good growth? Bad growth? This city is a great place to live and more and more people are seeing that! Urban sprawl is a worry though.

“A young man with brown hair and a scruffy beard became one of the most recognizable faces in Alberta Wednesday as a massive RCMP manhunt continued for a suspect sought in connection with a shootout near Killam that wounded two officers and left one man dead.”

Crazy story… too many RCMP shootings.

“The product, called AeroShot, went on the market late last month in Massachusetts and New York, and is also available in France. A single unit costs $2.99 at convenience, mom-and-pop, liquor and online stores.”

“Walmart Canada plans to add five stores to Edmonton in what the retail giant calls a record expansion year for the country. The company confirmed Tuesday it plans to complete at least 73 projects in its current fiscal year, which runs from Feb. 1 to Jan. 31, 2013. Walmart says it will add 4.6 million square feet of retail space to its operations in the next 12 months.”

Wowsa. That seems a bit much but Mike points out that current Walmarts are way too busy so this should make sure the lines are a little shorter, lol.

“Working parents in Edmonton have a new child-care option that offers a bright, airy downtown facility, guaranteed placement, emergency backup care, nutritious meals, education programs, no late pickup fees, and even eldercare services… The daycare is only open to corporate clients, which include the University of Alberta and BMO. Their employees get a guaranteed spot. Parents also pay varying child-care fees, about $50 to $60 a day.”

Including Global Edmonton! Would be cool if I had kids, lol.

“Air Canada has launched “all-in” airfares in its advertisements that incorporate taxes, fees and surcharges, months before Ottawa drafts regulations that would make the change mandatory. While Canadian carriers have resisted this change in the past, the recent adoption of all-in pricing by many foreign operators has paved the way for its implementation here.”

So now we really know how expensive flying is.

“RIM’s BlackBerry smartphones have long dominated corporate mobile communications with on-the-hip email and security credentials, but are increasingly challenged by Apple products and smartphones running Google’s Android software… Yet while many large corporation say they are testing how the iPhone and other devices can handle their email and other corporate data, it is unclear how many will ultimately abandon the BlackBerry entirely.”

If I was CEO of a company that was using BlackBerry’s I’d certainly be trying to switch over.

“Amazon and Viacom have reached a deal to add shows from the cable company’s various channels such as MTV, Comedy Central, and Nickelodeon, to Amazon’s Prime instant video service… Amazon Prime is easily one of the best deals you can get online, in my humble opinion. For $79/year you get free two-day shipping on most of Amazon’s products, access to thousands of streaming video titles, and some cloud storage on Amazon’s servers.”

I’m sure many will be subscribing.

“An Edmonton researcher is building a special machine which may revolutionize how cancer is eventually treated around the world – and it’s a project so secret that Global News has been the only media outlet invited to see it… Dr. Gino Fallone and his team hope their machine, once complete, will be able to overcome a problem that has been the subject of countless studies ever since radiation therapy started in the 1950s: how to deliver radiation to a tumour without hitting surrounding healthy tissues.”

This is great. I hope the machine works.

“Nine out of 10 American adults consume too much salt and the leading culprit is not potato chips or popcorn but slices of bread and dinner rolls… Bread may not have much salt in a single serving, but when eaten several times a day can raise daily salt intake. A single slice of white bread could contain as many as 230 milligrams of salt, according to the CDC.”

Cool, so I’m clear to eat chips then? Heehe.

“Thanks to modern food processing techniques, manufacturers are allowing toxic and disease-promoting ingredients to find their way into our food, and in many cases, they’ve invented clever ways to keep them off the ingredient statement.”

Including shrimp, salad dressing and mushrooms. Sad thing is I’ll still eat all of these, lol.

“Doctors at Tel Aviv University say morning is the best time to consume sweets because that’s when the body’s metabolism is most active, and we have the rest of the day to work off the calories. Eating cookies or chocolate as part of breakfast that includes proteins and carbs also helps stem the craving for sweets later.”

“NASA is looking for at least two U.S. firms to design and build space taxis to ferry astronauts to and from the International Space Station, program managers said on Tuesday… NASA hopes to be able to fly its astronauts on commercial carriers by about 2017.”

The Jetsons future is near, lol.

“Before and After Pictures of Joggers.”

“Meet Walk off the Earth, the ultra-talented quintet that turned its version of a sleeper hit into a viral phenomenon on YouTube and earned itself a record deal. The Canadian indie band posted a video covering Gotye’s “Somebody That I Used to Know” last month, and it has since been viewed on YouTube nearly 50 million times. The clip shows the band playing on a single guitar.”

Soooo cute. Also, it’s amazing how music can affect how you feel about a video lol. 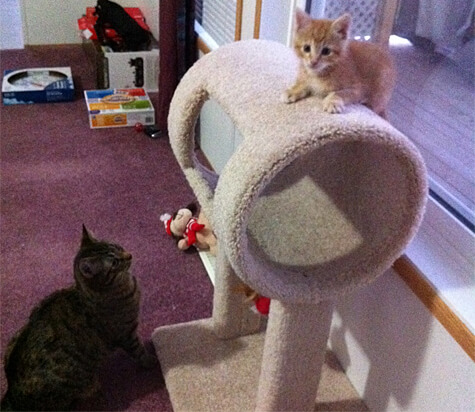 Linda Hoang is a Canadian blogger based in Edmonton, Alberta, who writes about travel, food lifestyle and pet topics. She's also a seasoned social media/digital strategist with a journalism background. Linda loves exploring the world with her husband Mike, eating their way through cities, supporting local businesses, and photographing Instagrammable Walls. She is the founder of the Edmonton International Cat Festival and a fur-mom to two cats and two dogs.
PrevPreviousClicks of the Day: Tuesday, Feb. 7, 2012 Edition!
NextClicks of the Day: Thursday, Feb. 9, 2012 Edition!Next