“A federal appeals court on Tuesday declared California’s same-sex marriage ban to be unconstitutional, putting the bitterly contested, voter-approved law on track for a likely appeal to the U.S. Supreme Court.”

“As the year unfolds, analysts say it will become increasingly apparent that Canada no longer leads the G7 in economic growth and job creation. And as unlikely as it seems, it’s the United States — the land of crippling trade deficits, high unemployment and government debt — that’s likely to relegate Canada to second place, if not third behind Germany.”

Stark contrast from that report a few months ago that said Alberta alone created more jobs than all of the U.S. during a certain period of time.

Yikes. The iPhone is a beast!

“On the first page of Facebook’s prospectus for its sale of stock to the public, it pegs the number of its “monthly active users” at a whopping 845 million people. The social networking site arrives at an even more astounding number when it comes to “daily active users”: 483 million people… Facebook counts as ‘active’ users who go to its Web site or its mobile site. But it also counts an entire other category of people who don’t click on facebook.com as ‘active users.’ According to the company, a user is considered active if he or she ‘took an action to share content or activity with his or her Facebook friends or connections via a third-party Web site that is integrated with Facebook.'”

“A survey released on Friday shows that people who have used the social networking site over a long period – since its founding in 2004, say – show no sign that they are tired of posting pictures, updating weekend plans or just relaying random thoughts.”

“Apple and Foxconn have both been on the hot seat over reports of the supplier’s poor factory conditions. But a CNN interview with one of the factory workers brings a personal story to the controversy… In 2010 a rash of worker suicides at the Foxconn plant in Shenzhen, China, triggered concerns among Apple and other tech companies… Last month a group of Foxconn workers threatened mass suicide over a pay dispute, an issue that was eventually settled.”

Wow. Didn’t realize there was so many suicide threats.

“People may experience strong urges for sex and sleep over the course of the day, but the urge to check Twitter and other social media sites is actually more difficult to resist, according to a new study.”

Shows the kind of world we’re living in ;)

“The Sacramento Bee fired award-winning photographer Bryan Patrick on Friday after finding three cases, going back to 2009, in which he digitally manipulated photographs.”

“A 3D printer-created lower jaw has been fitted to an 83-year-old woman’s face in what doctors say is the first operation of its kind. The implant was made out of titanium powder – heated and fused together by a laser, one layer at a time.”

“After a lengthy debate, Walmart decided that eggs are indeed healthy. Eggs are among the foods getting a new “Great For You” icon from the world’s largest retailer as it tries to convince shoppers that they can make healthy, low-cost choices when picking out food at its U.S. stores… To earn Walmart’s stamp of approval, foods must meet specific thresholds. Fresh fruits and vegetables qualify, as do lean cuts of meat. Brown rice makes the cut, while white rice does not. Skim and 1 per cent milk qualify, while 2 per cent and whole milk do not.”

“Doctors have found new evidence that strips of bacon inserted up the nose can stop nosebleeds. Yes, it’s true. A report published in the Annals in Otology, Rhinology and Larynology found that strips of “cured salted pork crafted as a nasal tampon and packed within the nasal vaults” successfully stopped a 4-year-old girl’s nosebleeds.”

Picturing it is hilarious but this is awesome!! Haha. Bacon is amazing.

“Soldiers could have their minds plugged directly into weapons systems, undergo brain scans during recruitment and take courses of neural stimulation to boost their learning, if the armed forces embrace the latest developments in neuroscience to hone the performance of their troops.”

Reminds me of a Dollhouse episode where soldiers’ minds were plugged into other soldiers’ minds so that they all thought and acted uniformly. This can only be the first step to that and thus the next step to destruction, lol.

“Last year, worldwide licensing revenue from synchronization — a fancy term for pop music in ads — hit an all-time high at $2.5 billion… The tangled relationship between popular music and advertising has evolved over the past decade. Many in rock ’n’ roll long believed that any artist helping to sell something was “selling out.” Today, our consumerist culture has fallen in love and married our most popular art form — and the old arguments about using pop music to sell a product don’t seem to matter in an era when profits for musicians have fallen away.”

“They were the ladies who lunched, when “lunching” was a verb and was—at such shrines as the Colony Club, La Côte Basque, and Le Cirque—impossibly glamorous, hugely entertaining, and utterly without purpose; when Babe Paley, C. Z. Guest, and Jacqueline Onassis ruled the banquettes. Bob Colacello charts the rise and fall of a high-society ritual (no one really ate) and the power klatches that have taken its place.”

Fascinating. Oh to be wealthy, lol.

How exciting. I much prefer Andrew Garfield as Spider Man! :)

“Jimmy Kimmel once again challenged his audience to pull another hilarious prank on their loved ones. This time, he asked people to wait for a crucial moment during last Sunday’s Super Bowl and then unplug the TV. Surprisingly, no one was killed.”

Soo strange. So unique. So cool! 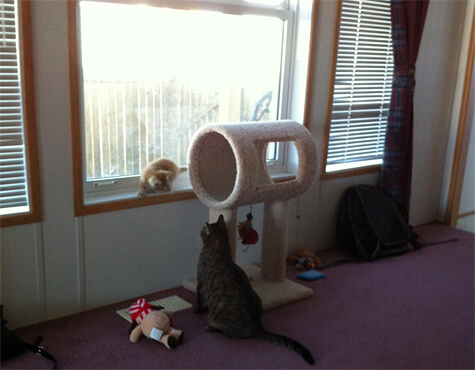 Linda Hoang is a Canadian blogger based in Edmonton, Alberta, who writes about travel, food, lifestyle and pet topics. She's also a seasoned social media/digital strategist with a journalism background, the founder of the Edmonton International Cat Festival and co-founder of Stop Race Based Hate, an online anti-racism education tool. Linda loves exploring the world with her partner Mike, eating their way through cities, supporting local businesses, and photographing Instagrammable Walls. Linda is a fur-mom to two cats and two dogs.
PrevPreviousStorify: #LetsTalkPMMA: Alberta Health Services talks Dangers of Ecstasy and PMMA on Twitter.
NextClicks of the Day: Wednesday, Feb. 8, 2012 Edition!Next