“In their tough-on-crime approach to legislation, the Conservatives are learning a tough lesson. Mess with the Internet and it’s going to mess with you. Social-media networks and comment pages exploded Wednesday in opposition to the Harper government’s introduction of Bill C-30, which would give police and spies easier access to information about Internet users.”

Yeah Internet users aren’t going to just quietly agree, lol. Also, how come this bill has been referred to as both Bill C-51 and Bill C-30? I’m confused.

“With texts, tweets, Facebook Chat, and Skype all available as means of instantaneous communication, it’s no surprise that the good ol’ email seems to be on its way out — at least for teens. According to a report recently released by digital marketing research company comScore, web-based email usage for teens 12 to 17 years old decreased 31 percent between December 2010 and December 2011.”

Makes sense. Though I still enjoy and use email quite a bit. (I’m not a teen though lol)

“Time spent playing online video games alone can do serious damage to your marriage, but the couple that quests together stays together, a new study shows. The Brigham Young University study says 75% of online gamers’ spouses wish their lovers would spend less time looting and levelling with their guildmates and more time working on their marriage. Usually, the problems stem from fighting over time spent gaming and disrupted bedtime routines, the study found.”

Indeed, lol. Mike gets all his game playing in time on Saturday and Sunday, which are conveniently days that I work so there’s no conflict :)

“When you have a sinus infection, the first thing you want is relief from your pain. If you’re like most people, you want your doctor to prescribe an antibiotic to speed that process… But a study released Tuesday adds to the growing body of science suggesting that with some infections, including those of the sinuses, antibiotics aren’t the best course of treatment. Waiting it out may indeed be the best approach after all.”

We gotta toughen up!

“The team found that infants born to mothers from each region of the world, except Europe and other Western countries, had significantly lower birth weights — up to 250 grams less — than those for infants of Canadian-born mothers.

“The study showed that 67 of every 1,000 babies born to parents from Africa or the Caribbean and 116 of every 1,000 South Asian babies were at risk of being labelled as significantly underweight if plotted on a conventional curve instead of the proposed region-specific charts. “We have a major problem on our hands if we misclassify a whole bunch of south Asian newborns as small when in fact they’re not … they’re appropriate for their own ethnicity.”

I was a teeny, tiny baby.

“Canadian girls are more likely to struggle with emotional problems and to experience lower levels of emotional well-being than boys, according to a sweeping national survey of the country’s youth.”

“The amount and quality of sleep you get at night may affect your memory later in life… After the study, it was discovered that 25 percent of the participants had evidence of amyloid plaques, which can appear years before the symptoms of Alzheimer’s disease begin.”

Good news for me, I sleep like a rock. (Is that the right phrase? lol)

“The researchers didn’t set out to discover why the numbers are increasing. But possible explanations range from the growing number of women who are pushing back pregnancy ever later in life, to rising rates of obesity and heavy drinking among women, to declining sperm counts in men — though experts aren’t convinced about that final factor.”

I hope this doesn’t affect me when it’s my time to start a family!

“Under pressure from U.S. legislators, Apple Inc moved Wednesday to quell a swelling privacy controversy by saying that it will begin to require iPhone and iPad apps to seek “explicit approval” in separate user prompts before accessing users’ address book data.”

“Researchers at Rutgers University and Microsoft developed Seriously Rapid Source Review to give journalists access to breaking news like never before. Reporters won’t have to comb the web — or Twitter’s 200 million tweets a day — for sources… SRSR features include automatic identification of eyewitnesses with approximate 89% precision and will list users in various archetypes — journalists, bloggers, organizations or unaffiliated citizens.”

“In its 33rd annual The Best of Newspaper Design™ Creative Competition, the Society for News Design has named five newspapers, representing four countries, the World’s Best-Designed™ Newspaper” including Canada’s own National Post!

“Are you exposing too much of yourself online? A former FBI agent explains how to cover up a little to showcase your best features.”

“New images from the European Space Agency’s Planck mission have revealed previously undiscovered islands of star formation, along with a mysterious haze of microwave emissions in our Milky Way galaxy.  ”

Oo. What’s happening up there…

“Ready to say goodbye to a sliver of your Snickers? And how about a slightly slimmer Mars bar? By the end of 2013, chocolate-maker Mars says all of its chocolate bars will be under — or right at — the 250-calorie mark.”

Great news in the fight against obesity, lol.

“A man suffered an apparent heart attack while eating a “Triple Bypass Burger” at the Heart Attack Grill in Las Vegas.”

Well, it kind of comes with the territory.

“A daring thief and/or desperate photographer just made off with an official Nikon van. The cargo? One hundred and fifty grand worth of cameras and accessories, including the unreleased D4 and D800. Nikon wants their goodies back.”

That’s quite the theft.

“Data reveals the rarity of her perfection.”

“Here are 20 fonts and the cats that clearly inspired them. This is a rare and important opportunity for cat fanciers and typophiles to find some common ground.” 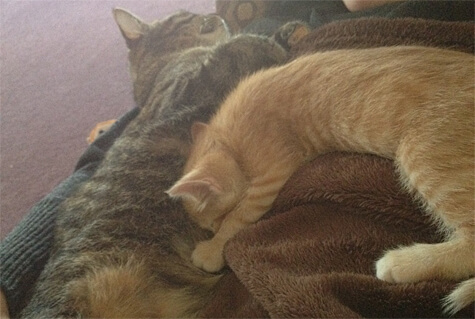 Linda Hoang is a Canadian blogger based in Edmonton, Alberta, who writes about travel, food lifestyle and pet topics. She's also a seasoned social media/digital strategist with a journalism background. Linda loves exploring the world with her husband Mike, eating their way through cities, supporting local businesses, and photographing Instagrammable Walls. She is the founder of the Edmonton International Cat Festival and a fur-mom to two cats and two dogs.
PrevPreviousClicks of the Day: Tuesday, Feb. 14, 2012 Edition!
NextReview: NomiyaNext