“Prime Minister Stephen Harper called on parliamentarians Tuesday to stand firm against child pornography and support a contentious bill that will require telecommunications companies to hand over customer information to police without a court order. But opposition parties hit back hard by predicting the new bill will lead to an infringement of the privacy of Canadians, saying it will allow police to build a detailed profile of people, including law-abiding citizens, using their digital footprint — without any judicial oversight. ”

Oy. I really wonder how the next couple of years are going to be with all of this Internet crackdown/privacy/control/Big Brother stuff going on.

“How local is the food you eat? A pilot study called “Localize Your Food” is being tested in ten grocery stores in and around Edmonton… Products have shelf tags which show a rating out of ten. Ten being the most locally produced item. The tags can be scanned with your smart phone to instantly see where and how a product was made.”

Pretty cool. And will likely be popular as more and more people choose to “shop local” !

“The union representing Air Canada’s pilots voted overwhelmingly in favour of strike action Tuesday, but the pilots insist the move is “defensive” and that passengers have nothing to worry about.”

Man, it seems like Air Canada strike-related problems are never-ending. Here’s the key message: don’t book with them.

“If approved by Congress, the budget request would reduce funds available for planetary science by about 21%. But spending on human exploration and space technology would rise by 6% and 22% respectively.”

I think human space flight and exploration is more important than probing Mars so this is alright with me! Meanwhile let’s deal with problems back here on Earth…

“A team of researchers from France and the United States has discovered that the planet’s oceans are rising as ice melts… The data show that overall global ice mass lost from Greenland and Antarctica as well as the world’s other glaciers and ice caps over the 7-year period was around 4.3 trillion tonnes. The result is that the global sea level has increased by 12 millimetres. The experts say that is enough ice to cover the United States 0.5 metres deep.”

“A whale from the struggling population of endangered southern resident killer whales has died of massive trauma, but it is not known what caused the injuries to the three-year-old female.”

Also scary… I wonder what happened.

“A species of chameleon small enough to easily perch on a match head has been discovered on a tiny island off Madagascar, a group of scientists has announced.”

“The General Services Administration, the U.S. government’s main procurement agency, has begun issuing iPhones alongside BlackBerrys, delivering another knock to Research In Motion Ltd.’s once dominant position in Washington.”

“It’s mid-February, when every true geek’s heart turns to rumors of the upcoming Apple iPad. Here’s Tuesday’s scoop: the iPad 3, set to launch next month, will run on AT&T and Verizon’s superfast 4G networks. According to the Wall Street Journal, which cites the usual “people familiar with the matter,” the hotly anticipated tablet will be sold with 4G versions that are capable of picking up LTE signals from one of the nation’s two top carriers.”

I love Apple but another iPad generation already?? Too soon. #TechnologyMovingSoFast

“Pinterest has emerged as the runaway social media hit of early 2012. You probably knew that already. But did you know the company just has 12 people? Or that 97% of Pinterest’s Facebook fans are women?”

“Whoever said people in love have good chemistry hit the bull’s-eye without even knowing the whole story. At Carleton University, neuroscientist Hymie Anisman is opening up the brain’s secrets to show how the chemicals of love (and friendship) make us healthier. The mere physical presence of someone you trust can brace you at stressful times, Anisman says.”

“Pet owners with chronic diseases appear to have healthier hearts than people living without an animal companion, whether furry, scaly or feathery, according to a Japanese study. In findings published in the American Journal of Cardiology, researchers who studied nearly 200 people found that those with a pet had higher heart rate variability than those who didn’t.”

“Chris Brown has a special Twitter message for those who hated on his Grammy performance: “F___ Off.” The hip-hop performer lashed out on his Twitter account, addressing his critics in a series of missives ending with a final “F You.” A few minutes later, Brown (or his handlers) thought better of it and attempted to delete all evidence of his Twitter tantrum.”

“A gay couple celebrated Valentine’s Day by breaking the world record for the longest ever kiss after managing to keep their lips locked together for an incredible 50 hours, 25 minutes and one seconds.”

I don’t think I could kiss Mike for 50 hours lol and I love him! But man that’d get tiring and boring, lol. Congrats to those two though!

“Edmontonians show how witty they are on Valentines Day by posting these #yeg-specific Valentines tweets under the hashtag: #yegvalentine.”

Producing Montreal on my day off today but also had time to Storify (curate) these funny Edmonton-specific Valentines tweets from fellow Edmontonians! :)

“It may have been in the rain, on the benches in the park or at the coffee shop down the street. It was the memorable kiss you hope to never forget and wish you could tell the world about. Now, thanks to Torontonian Chris Kay Fraser, Canadians can map out their unforgettable smooches and immortalize them on the Internet on Canada Kiss Map.”

“According to a recently released BMO survey, consumer spending in Canada leading up to Valentine’s Day increased solidly from 2010 to 2011. In 2010, Statistics Canada says a total of $1.6 billion in women’s lingerie and sleepwear was sold in Canada.” and another fun fact: “52 per cent is the number of Canadians who are single (includes couples that are not married).”

Hallmark holiday, so expensive! (Well, it can be). Remember to tell the people you love how much you love them every day! :)

“A short animation takes you through the story of that same young boy, desperate to obtain the affections of a young jump roping girl. But even with the handy help of Google, his gifts of affection are ignored repeatedly, until as a last-ditch effort he decides to jump rope beside her. Unexpectedly, the girl takes notice and embraces the boy. So what is the moral of the story? Sometimes lavishing your significant other with gifts isn’t necessarily the solution. Sometimes all they may want is to be understood.”

Such a cute video doodle. <3 Google Doodles continue to impress! 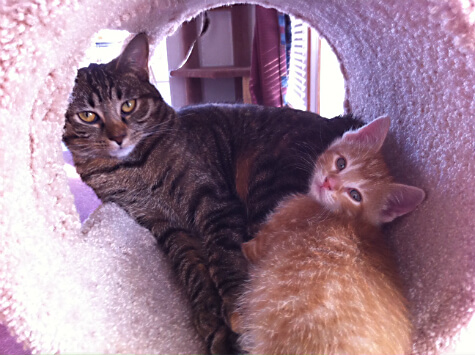 Love this photo of Thor and Loki!! They are so aware :)

Linda Hoang is a Canadian blogger based in Edmonton, Alberta, who writes about travel, food, lifestyle and pet topics. She's also a seasoned social media/digital strategist with a journalism background, the founder of the Edmonton International Cat Festival and co-founder of Stop Race Based Hate, an online anti-racism education tool. Linda loves exploring the world with her partner Mike, eating their way through cities, supporting local businesses, and photographing Instagrammable Walls. Linda is a fur-mom to two cats and two dogs.
PrevPreviousClicks of the Day: Monday, Feb. 13, 2012 Edition!
NextClicks of the Day: Wednesday, Feb. 15, 2012 Edition!Next