“At least 74 people were killed and hundreds injured after soccer fans rushed the field in the seaside city of Port Said Wednesday following an upset victory by the home team over Egypt’s top club.”

“A thin film of oil spread from the Costa Concordia cruise ship as waves battered the wreckage off Italy’s coast Wednesday, adding to fears of an environmental disaster in the area’s sensitive, pristine waters.”

“The social-networking giant’s initial public offering document reveals a wealth of detail about its business operations… In 2011, the company reported net income of a clean billion dollars on revenue of $3.7 billion… Zynga accounted for an astonishing 12 percent of all Facebook revenue in 2011… We all expected some big user numbers, and Facebook certainly delivered on that front. It claims 845 million ‘monthly active users,’ and an astonishing 483 million ‘daily active users.'”

“The CBC has more than 700 staff on the payroll making $100,000 annually, the public broadcaster revealed to a Conservative MP who had asked for salary details of top CBC executives and on-air staff. But the CBC will not name them.”

This is where Mike and I are staying for our Vegas trip in April. This is very concerning.

“Vietnam has confirmed its second human death from bird flu in nearly a month, after going nearly two years with no reported fatalities.”

Bird Flu 2.0 is back and spreading.

“On Wednesday, a day when post-secondary students across the country staged rallies to demand improved post-secondary funding, the Occupy Edmonton group decided to stand in solidarity with the U of A Student’s Faculty and staff by staging a protest at the university.”

“As technology becomes more and more a part of everyday life for Americans, the candidates can be expected to address tech issues more frequently as Election Day looms nearer.”

I’m woo-ed by the fact that Obama does Google+ Hangouts, lol.

“A dinosaur-age ancestor of modern crocodiles from Morocco had a huge armoured head designed as a “fish trap”, scientists have revealed. The extinct creature, dubbed “Shieldcroc”, lived around 95 million years ago but was unlikely to have wrestled with dinosaurs. Instead, it probably used its long flat jaws to ambush fish.”

“If you just want to get some this Valentines’s Day, perhaps you should consider making plans with someone who owns an Android phone. A recent Match.com survey found that Android users are most likely to put out on the first date.”

“From the government to an archaeologist to an extra in a Charlie Chaplin film, time travelers abound in legend, rumor, and documented “proof.” Can we really send a man to the future and return him safely to the present? Judge the truth for yourself after perusing these time traveler stories.”

Including “‘Keep it simple.’ Journalists too often have a solid base for a story, but want to reach out and make an assumption, or throw in a random fact to make a story longer and seem more factual. This often creates confusion.” – “Start a story assuming nothing. While it is important to do research before a story, often reporters will think they already know the answers to their questions, which can prevent accurate reporting.” – “Simply ask questions. When in doubt, it is important to ask questions about details that are unclear.”

Good tips, all around.

I’m surprised my grammar pet peeve isn’t on here: “who” vs. “that” lol. Grrr.

Volkswagen is rocking with their Super Bowl commercials :) 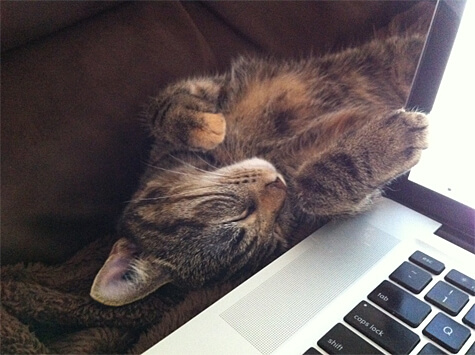 Linda Hoang is a Canadian blogger based in Edmonton, Alberta, who writes about travel, food, lifestyle and pet topics. She's also a seasoned social media/digital strategist with a journalism background, the founder of the Edmonton International Cat Festival and co-founder of Stop Race Based Hate, an online anti-racism education tool. Linda loves exploring the world with her partner Mike, eating their way through cities, supporting local businesses, and photographing Instagrammable Walls. Linda is a fur-mom to two cats and two dogs.
PrevPreviousClicks of the Day: Tuesday, January 31, 2012 Edition!
NextClicks of the Day: Thursday, Feb. 2, 2012 Edition!Next