“The man accused in the savage beating of a Canadian tourist says he was forced to sign a confession he never read.”

And the sketchiness of this whole situation grows.

“After a record-breaking year that saw two homicides on the last day of 2011, Edmonton has recorded no homicides throughout the first month of 2012… The longest homicide-free stretch the city saw in 2011 lasted six weeks, from mid-October to the end of November.”

Hope this doesn’t jinx it! lol.

“Daryl Katz may have a $920-million public relations problem on his hands. The Oilers owner sold a chunk of his pharmacy business for that much Monday, and even with a separate $70 million purchase, closed out the day with $850 million more cash than he started with. That earned him online accolades from some for being “a shrewd businessman” but raised the question for others: “why are WE paying” for the downtown arena?”

“Researchers say melting Arctic sea ice is enticing more killer whales to Nunavut waters where they are competing with Inuit hunters for food and threatening to replace polar bears as the North’s top predators.”

“Mitt Romney rolled to victory in the Florida primary on Tuesday, dispatching an insurgent threat from Newt Gingrich and reclaiming his dominant position as he urged Republicans to rally behind his quest to capture the party’s presidential nomination.”

“The verdict is in from Canada’s top judge: The justice system must get a firm grip on social media such as Twitter and Facebook. That’s because both a free press and an independent judiciary have key roles in a democracy committed to the rule of law.”

Lots of things need to get a grip on social media.

“Eight years ago this week, Facebook was born. Do you even remember life before it?”

Life before Facebook, so different our day-to-day lives would be!

“Medical milestone or privacy invasion? A tiny computer chip approved Wednesday for implantation in a patient’s arm can speed vital information about a patient’s medical history to doctors and hospitals. But critics warn that it could open new ways to imperil the confidentiality of medical records.”

Implanting computer chips into humans? Just perils about confidentiality of medical records? I believe this is the opening of Pandora’s Box for a lot of bad things. Geez!

“Researchers found that when the couples were separated physically, they had higher cortisol levels and had worse sleep than when they were together.”

I think my cortisol levels and sleeping patterns are doing pretty good! :)

“How long did it take evolution to turn a mouse-sized mammal into one the size of an elephant? A thousand generations? A million? Actually, it’s 24 million generations. That’s the “speed limit” of large-scale evolution, according to a team of biologists and paleontologists at Australia’s Monash University.”

“Hello Kitty’s entire history is being questioned following the publication of Hello Kitty’s Guide to Japan in English and Japanese. Is the world’s most famous cat from London or Japan?”

So funny. It’s these kinds of articles where it’s so satisfying to be a journalist – one day you’re doing some hard-hitting piece, the next an expose on the origins of Hello Kitty!!! Awesome, haha.

“So Kristen Bell has a big thing for sloths. She shared her adoration for the furry creatures during an Interview on “The Ellen Show,” which is airing today.”

LOL!! This is HILARIOUS! I love Kristen Bell :)

“Alyssa has the strange ability to say any word backwards.”

“A dog helps out around the office.” 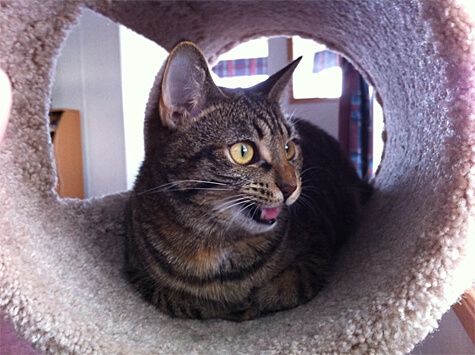 This is what Thor looks like when she’s eyeing a bird outside, lol. She also makes funny clicky noises.

Linda Hoang is a Canadian blogger based in Edmonton, Alberta, who writes about travel, food lifestyle and pet topics. She's also a seasoned social media/digital strategist with a journalism background. Linda loves exploring the world with her husband Mike, eating their way through cities, supporting local businesses, and photographing Instagrammable Walls. She is the founder of the Edmonton International Cat Festival and a fur-mom to two cats and two dogs.
PrevPreviousClicks of the Day: Monday, January 30, 2012 Edition!
NextClicks of the Day: Wednesday, Feb. 1, 2012 Edition!Next