“An Edmonton couple and their two young children are dead after a crash Wednesday night near Barriere, B.C. that was so horrific even a veteran Mountie was shaken. “It looks like a piece of metal. You couldn’t tell the make,” Barriere Mayor Bill Humphreys said of the family’s vehicle.”

“Laura Chee’s adult life was about to take shape… Chee had a boyfriend she deeply loved. The afternoon of Feb. 21, 2011, Chee and David Lam had discussed the kind of house they would like to live in one day. At 7:30 p.m. Chee was killed by a drunk driver.”

“Six federal bureaucrats were drafted to pose as new Canadians for a citizenship reaffirmation ceremony broadcast on the Sun News network, an event requested by Immigration Minister Jason Kenney’s office. The bureaucrats smiled and held Canadian flags as the TV hosts referred to a group of 10 people as “new Canadians” that had “finally” received their citizenship.”

“It may be possible to bring a patient’s Alzheimer’s disease to an abrupt halt very early in its course by preventing this cell-to-cell transmission, perhaps with an antibody that blocks tau.”

“Sugar is so toxic it should be controlled like alcohol, according to new report that goes so far as to suggest setting an age limit of 17 years to buy soda pop. It points to sugar as a culprit behind many of the world’s major killers — heart disease, cancer and diabetes — that are now a greater health burden than infectious disease.”

Probably not a bad idea…

“DNB Liv, the life-insurance arm of the company, allows only a total of eight minutes per day for bathroom trips, cigarette breaks, personal phone calls and other work-break activities. If an employee is away from the desk for more than the allotted time, a surveillance system triggers an alarm and alerts managers with flashing lights.”

“Do you ever wonder how people react when they see your Twitter updates? Odds are, most would fall under the category of “meh,” according to a new study… Sharing information, asking questions of followers and self-promotion, like linking to a story you just wrote (if you’re a journalist) were more likable.”

So are you doing Twitter wrong or right? I feel like you’ve got to have a balance of useful, informative links and information, dialogue, as well as those generic what-you-ate type of tweets!

“The danger to Google, in other words, is that as social networking, smartphones and tablets increasingly come to dominate the Internet, Google’s chance to earn advertising revenues from searching will shrink along with its influence.”

Interesting read, but I have faith in Google. #supergiant

“Many of Facebook’s first employees are no longer at the company. Some left to join reputable startups like Twitter; others started their own companies like Quora, Asana and YouTube. Those who remained at Facebook now have executive positions (and many of them just became millionaires). Out of the first 20 employees, only two were women.”

So interesting. Gotta admit it’d be pretty sweet to list Facebook as a previous employer on your resume, lol.

“Pinterest is now the fastest growing site for referral traffic, according to a new study by content-sharing company Shareaholic. If Google+, YouTube, and LinkedIn’s referral traffic were added up, they still wouldn’t drive as many users as Pinterest.”

“Canadians enjoy among the fastest, most widely available and least expensive broadband Internet in the developed world… At 74%, Canada has the highest broadband penetration rate in the G7, the report said, significantly ahead of the United Kingdom (69.2%) and France (69%). Canadians also have the second-least expensive average monthly broadband subscription rates in the G7.”

Go us :) But while we rock at that, we fail at our cell phone services. #rippedoff

“The sub-head was put in as a joke, by editors, that unfortunately slipped through our editing process later in the night.”

“Moving big animals to places they don’t already live is at once appealing and disturbing, a sort of adolescent environmental fantasy come to life: African lions in Nebraska! Komodo dragons in Australia! But at the beginning of the 21st century, with 7 billion humans competing for space and resources on a rapidly warming planet, exercising arguable control over the fate of nature, moving species around is a legitimate option.”

If it will save them…

“A huge crustacean has been found lurking 7km down in the waters off the coast of New Zealand. The creature – called a supergiant – is a type of amphipod, which are normally around 2-3cm long. But these beasts, discovered in the Kermadec Trench, were more than 10 times bigger: the largest found measured in at 34cm.”

Wowsa! Take a look at the picture – gigantic!!!

“In the Army’s latest round of small-business research awards, they’ve green-lit a proposal to manufacture transplantable brown fat cells, all in an effort to catalyze rapid weight loss… At first glance, the idea of adding fat to get rid of fat doesn’t exactly add up… The distinction comes down to varieties of fat: Humans carry pockets of conventional fat, or white adipose tissue. They also carry brown adipose tissue. And recent research has confirmed that the stuff’s pretty damn special: It burns a ton of calories.”

“Which finale scene was set in stone a while back? What hidden “Easter eggs” might watchful fans have caught? And perhaps most critically, what should we make of that closing scene? Series creators Josh Schwartz and Chris Fedak answer those questions and others.”

A nice read if you are a Chuck fan like myself :)

“While not fully intended to be a replacement for AVID Studio on desktop PCs, All Things D says that it is classified as a prosumer app and that the company wants it to complement its desktop counterpart.”

I love this story on Nitro the dog who is the superstar in a Superbowl commercial!! 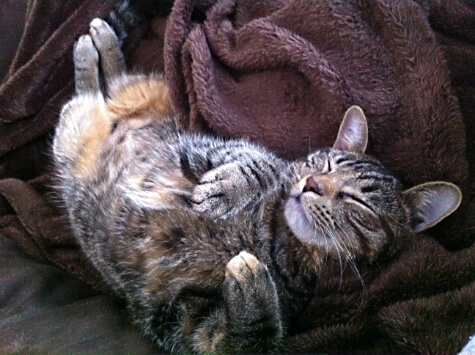 Linda Hoang is a Canadian blogger based in Edmonton, Alberta, who writes about travel, food, lifestyle and pet topics. She's also a seasoned social media/digital strategist with a journalism background, the founder of the Edmonton International Cat Festival and co-founder of Stop Race Based Hate, an online anti-racism education tool. Linda loves exploring the world with her partner Mike, eating their way through cities, supporting local businesses, and photographing Instagrammable Walls. Linda is a fur-mom to two cats and two dogs.
PrevPreviousClicks of the Day: Wednesday, Feb. 1, 2012 Edition!
NextStorify: #LetsTalkPMMA: Alberta Health Services talks Dangers of Ecstasy and PMMA on Twitter.Next