Welcome to Wednesday, December 7 2011’s Clicks of the Day!

“Research in Motion can’t catch a break. The maker of BlackBerry phones is giving up on the name “BBX” for its next-generation operating system due to trademark issues, and will call it “BlackBerry 10” instead. RIM announced the change on its Twitter page, after a federal court in Albuquerque issued a temporary restraining order against the company.”

“Facebook says it has started rolling out its much-anticipated Timeline feature, and the Kiwis are the first to get it.”

About time. I thought everyone was supposed to get Timelines back in October!

“The researchers found that the women who ate rice daily showed median arsenic levels of 5.27 micrograms per liter, while the non-eaters showed a median level of 3.38 mcg per liter. That’s a statistically significant difference, though it’s important to note that even the rice eaters were well below the Environmental Protection Agency (EPA) standard of 10 mcg per liter. Less good: more than 10% of the women in the study had drinking water with arsenic levels above those EPA standards.”

I will never stop eating rice!!! No matter what! #riceisinmyblood

“Outrage poured across the /internet once reports of a 9-year-old receiving a two-day suspension for calling a teacher “cute” surfaced, but now it appears he’s receiving some justice, WBTV reports. ‘We will be sending an official letter of apology to the parents,’ Gaston County Schools Spokesperson Bonnie Reidy told the station. ‘Also the suspension will not count against the child and the child will receive additional instructional assistance to make up for the time out of the classroom.'”

Good. This was ridiculous in the first place.

“Newspaper publishers in the United States have seen their advertising sales and circulation flounder over the past few years and are turning to the Internet in a bid to stay afloat. Publishers such as the New York Times Co have pay-walled their online content to diversify revenue sources in a closely watched move. ‘The whole industry is looking to digital advertising to recover its fortunes. The future is digital, not print,’ Benchmark analyst Edward Atorino told Reuters.”

I agree the future is in digital but I don’t like paywalllllls :(

“A lot of great – and important – things happened in 2011. However, a lot of stuff also happened that we should just wipe from our memories. Here’s to a much less trashy 2012!”

“Merry Christmas! At least, that’s what you’re likely to hear from fellow Canadians in the coming weeks, according to a new poll. An overwhelming majority of people across Canada – 76% – are more likely to use that greeting instead of the generic happy holidays and seasons greetings, indicates an Abacus Data poll on how Canadians celebrate Christmas.”

“As revealed in October, this year Google has spent $1.4 billion on 57 acquisitions this year. So yes, with 52 weeks in a year, that sounds about right. Of course, Google has been particularly aggressive with its acquisitions this year, especially in the mobile, social, and search areas. We’ll have to see if the search giant will continue its acquisitive strategy in 2012, or scale back.”

That’s a lot of acquisitions. #WorldDomination

“PayPal is taking an online beating after allegedly shutting down an account for a charitable gift buying program run by the popular “craft fail blog,” Regretsy.”

Always great to see how taking to the Internet looking for justice will get you justice.

“The app, which displays feeds from both formal news sources and social networks in a magazine-like format, has been entirely reengineered to serve the unique habits of newsreaders on the iPhone.”

Nice. Flipboard is so pretty.

“A U.S. District Court judge in Portland, Ore., ruled that a blogger who wrote about an investment firm that subsequently accused her of defamation must pay the company $2.5 million because she’s a blogger who doesn’t legally qualify as a journalist.”

Careful what you write on the blogosphere – always.

“You do not sink into like you’re in a swimming pool, you do not instantly melt into goo on contact, when you hurl yourself into a pool of molten rock, you’re more like a piece of Styrofoam floating on a pool of motor oil than a surfer falling off his board. You’d stay afloat. Then you’d burst into flames, since molten lava is more than 1,000 degrees Celsius. So you’d be more flaming and charring than melting.”

You learn something new every day!

“Under the new legislation, if a person is caught driving with a blood alcohol level from 0.05 to 0.08, his license would be suspended for 3 days, and his car could also be seized for the same period. That’s an increase from the standard 24-hour suspension currently being handed out to those caught driving drunk. For repeat offenders, the penalties would also increase incrementally.”

I am against drinking and driving but this makes me feel bad for the people who socially drink one or two on a night out – it does seem like restaurant/bar owners will suffer serious losses.

“Stephen Harper and Barack Obama are calling it the dawning of a new day in Canada-U.S. relations: a border security pact that includes a controversial new entry-exit system for crossing the 49th parallel… The deal will not only improve screening procedures for travellers and passengers before they arrive in North America, it will also create domestic jobs, the president said.”

“Jerry Sandusky was slapped with a slew of new child sex abuse charges today, after two more victims told their stories of their relationships with the former coach to the grand jury.”

Ugh. And add that with this:

“Disgraced junior hockey coach Graham James, among the most reviled figures in Canadian hockey, admitted Wednesday that he repeatedly sexually assaulted two of the young players he once mentored — including retired NHL superstar Theoren Fleury.”

What is up with these people…

“Anomalocaris is one of the weirdest and fiercest creatures from the Cambrian period… With its circular, serrated mouth, giant eyes on stalks, spiked arms, and body-spanning fins, this two-meter-long creature was at the top of the food chain in the Earth’s ancient seas. And now it seems, based new fossil evidence, that this killing machine probably had highly accurate, 360 degree vision. Its highly visual hunting style probably changed the course of animal evolution forever.”

Sounds so cool. Ancient creatures are so fascinating.

“Hunch.com recently polled more than 200,000 pet owners to find out if they were dog people or cat people. The site then crossed those responses with lifestyle surveys and arrived at the following conclusions…”

“A new trailer for season five of the Jersey Shore has been released, and it looks as though you can expect the usual debauchery and drama from the GTL-abiding crew.” 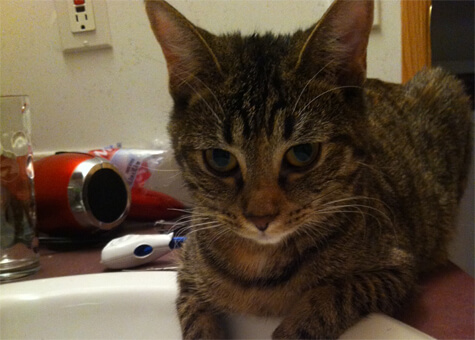 Thor likes to hang by the sinks.

Linda Hoang is a Canadian blogger based in Edmonton, Alberta, who writes about travel, food, lifestyle and pet topics. She's also a seasoned social media/digital strategist with a journalism background, the founder of the Edmonton International Cat Festival and co-founder of Stop Race Based Hate, an online anti-racism education tool. Linda loves exploring the world with her partner Mike, eating their way through cities, supporting local businesses, and photographing Instagrammable Walls. Linda is a fur-mom to two cats and two dogs.
PrevPreviousClicks of the Day: Tuesday, December 6, 2011 Edition!
NextClicks of the Day: Thursday, December 8, 2011 Edition!Next