“Ever wonder whether that link you want to share with friends is still in its prime? Sure you have. And now a “mad fresh” website — Is It Old? — has swooped in to rescue you from embarrassingly distributing old content.”

“Yes way, dear child. The first SMS text (which stands for short message system) was sent in the United Kingdom 19 years ago this week by a man named Neil Papworth. The text said “Merry Christmas,” and I suspect that young Neil had no idea what he was unleashing.”

“Scientists from NASA and Ohio State University now say that the waves were actually a “merged tsunami,” and that the phenomenon doubled the power of the disaster. Satellites from NASA and European agencies show at least two wave fronts created by the quake—not just one as you might expect from a single quake.”

“If you spend a lot of time being a couch potato, you may eventually need a bigger couch to accommodate your bigger butt… The findings show that even people with healthy diet and exercise habits will be negatively impacted by long periods of inactivity.”

Mike says ‘the Kardashians must sit all the time then,’ lol.

“Rubbing a walnut over scratches in your furniture will disguise dings and scrapes.”

According to praising tweets this is a great read on technology but there are so many links that I haven’t had a chance to get through them. Definitely a link to save and sift through.

“There’s been no shortage of hand-wringing over the menace of “sexting” among kids, but new research finds that parents’ concern may be largely overwrought: only 7% of children ages 10 to 17 created, appeared in or received a sexually suggestive photo in the past year.”

Yeah media tend to blow things out of proportion, lol.

iPhoneography and Photos within Photos are among the trends.

“On Dec. 6, 1989, Marc Lepine burst into a classroom at the school, separated the men from the women and opened fire on the female engineering students. ”

“Dec 6: In 1917, much of Halifax was destroyed after the French munitions ship “Mont Blanc” exploded in Halifax harbour. More than 1,800 died and 9,000 were injured in the explosion.”

“The study found that of the 2,000 Canadians surveyed before and after the Games, 54.3 per cent supported the program before the Olympics got underway, a number that jumped to 80.9 per cent once the Games were complete. Canada led all countries with 14 gold medals in Vancouver.”

Wooo. Yeah, easy to support when we rake in the gold ;)

“The joint review panel hearing submissions on the controversial Northern Gateway oil pipeline to the B.C. coast will take a year longer than expected to deliver its final report.”

Good. They should be taking as long as possible… if there was a spill it would destroy SO MUCH. :(

“I cringe every time I see a patient for a breast lift who is a smoker. I’m deathly afraid that despite my warnings, she will smoke before or after surgery and cause her nipples to turn black and fall off. Yes. Smokers who undergo breast lifts are at great risk of losing their nipples. I’ve seen it before.”

“Authorities say piranhas attacked and killed a young man who leaped into a river infested with the flesh-eating fish in northeastern Bolivia.”

Such a bad way to die.

“A Texas woman who for months was unable to qualify for food stamps pulled a gun in a state welfare office and staged a seven-hour standoff with police that ended with her shooting her two children before killing herself, officials said Tuesday.”

This is incredibly depressing.

“A catalogue of habitable worlds is being compiled by scientists as soaring numbers of ”exoplanets” are detected among the stars.”

“Miguel Endara created an amazing portrait titled “Hero” of his father, the amazing part is that it was created by using only dots, 3.2 million of them.”

Some people are so, so talented. 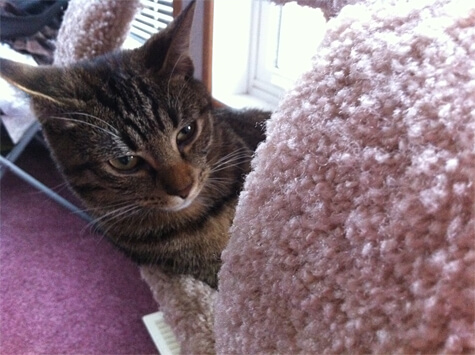 Linda Hoang is a Canadian blogger based in Edmonton, Alberta, who writes about travel, food lifestyle and pet topics. She's also a seasoned social media/digital strategist with a journalism background. Linda loves exploring the world with her husband Mike, eating their way through cities, supporting local businesses, and photographing Instagrammable Walls. She is the founder of the Edmonton International Cat Festival and a fur-mom to two cats and two dogs.
PrevPreviousClicks of the Day: Monday, December 5, 2011 Edition!
NextClicks of the Day: Wednesday, December 7, 2011 Edition!Next