Welcome to Thursday, December 8 2011’s Clicks of the Day!

“Sure the kids love them, but parents be warned – many popular breakfast cereals contain more sugar than a Twinkie or chocolate chip cookie, according to a new study.”

“Today in history – Dec 8: In 1941, the United States, Britain and Australia declared war on Japan following the Pearl Harbor attack the previous day. Also today in history, in 1980, former “Beatle” John Lennon was shot to death outside his New York City apartment building as he and his wife, Yoko Ono, were returning from a recording session.”

“Polar bears are increasingly deprived of the sea ice they rely on to access seals and other tasty mammalian treats. This has led to speculation that, trapped on land where there’s no food, they may be resorting to cannibalism at rates significantly higher than before.”

So, so sad. I blame humans.

“Citi’s Richard Gardner says “several sources” have told him the iPad will be unveiled during February with a new screen that we’ve been hearing about, which will be double the resolution of the iPad 2.”

It feels like the iPad 2 was released just yesterday, lol. #technologyismovingtoofast

“As part of a major redesign, Twitter is launching a new ‘discover’ section — a personalized stream of news stories and other information ‘based on your current location, what you follow and what’s happening in the world.’ In other words, it’s acting like a news service. Raw information meets (automated) editorial judgment, and out comes a digital front page of headlines, photos, videos or hashtags it thinks a user will be interested in.”

Yay, New Twitter. Love that you can embed tweets now too!

And Facebook expands as well~ Big social media day – add this too:

“Google has released a free mobile app that pulls content from different websites into one place and lets people build what looks a bit like their own personalized online magazine. Called Google Currents, the app came out on Thursday, one day after a similar app called Flipboard was released for Apple’s iPhone.”

“I have just had devastating news: My 58-year-old second husband of two years has been having an affair with my 25-year-old daughter from my first marriage. I am in a state of utter shock.”

Wow what a terrible situation. Advice columnists probably get some ridiculous/crazy letters but this one definitely has to top that list. Messed. Up.

“Parents in Michigan were furious after a music teacher edited the word “gay” from the traditional Christmas song “Deck the Halls” and substituted “bright” instead. However, the word “gay” has now been reinstated.”

“A lot of people think of Vancouver neighbourhoods in a stereotypical way, but many are too polite to express these thoughts out loud. Well, this new map that surfaced on Twitter gives voice to some of those assumptions, breaking the city up into different regions based on race, sexuality and socio-economics.”

Haha, pretty funny! Someone should do up one for Edmonton.

“The Edmonton region’s newest mall officially opened on Thursday, but to shop there, you need to pass through a metal detector and buy airfare. The 1,500-metre Central Hall, at the Edmonton International Airport, offers 12 shops and restaurants for international and domestic passengers who have cleared security screening.”

Good news. I always thought Edmonton’s airport was pretty blah compared to others.

“Councillors called for action Thursday after discovering that each person calling the 311 information line dings the city for nearly $5. ‘I have stopped calling 311 now. I used to call often to get information for transit or rec facilities. Once I learned the cost, I just (went) to the website,’ Coun. Amarjeet Sohi said.”

This is ridiculous!! Use the Internet to get your information, people.

“In an update to its 2011-2012 winter forecast for Canada, Accuweather predicts Calgary and Edmonton are in for what could be one of the top three coldest winters in the past 20 years.”

“Since a lot of drivers don’t really know what to do in the event of a crash, police resources can end up getting tied up unnecessarily. Here’s what you should know in order to keep minor collisions from becoming major headaches.”

“Albertans paid their provincial politicians more than $13.5 million in salary and benefits last year, and forked out an additional $4.5 million in travel expenses.”

“One standard drink — and standard is the sticking point — won’t put you beyond the .05 mark (meaning you have 50 milligrams of alcohol in 100 millilitres of blood). That doesn’t mean a margarita with a double shot. Not a beer schooner, not a pint, not even a generous glass of wine that has 15-per-cent alcohol instead of 12 or 13 per cent. That’s one standard drink. Period.”

Will really make people think what ‘one standard drink’ is.

“Once more there were gunshots, a lockdown and a campus community trapped in offices and classrooms, waiting in fear. Once more, there was terror at Virginia Tech.”

“Students and parents Thursday reported receiving detailed e-mails and text messages within minutes on their computers and cellphones describing the incident, the gunman, the victim and what they should do to stay safe. In 2007, two hours passed before the first message was broadcast — a vague description of “a shooting incident” and no mention of deaths.”

This is great – faster, better communication.

“In 2007, Amie Steele was editor-in-chief of the Collegiate Times, responsible for leading the team covering the shooting that killed 32 people… Steele’s journalism future was short… her experience with national media in 2007 changed her impression of journalism, ‘but not in a way you would expect.'”

Really interesting insight. And for her to be involved in all of that at 21 – what an experience.

“‘With the proliferation of mobile devices, that’s just where the next threat landscape is going,’ … Mobile malware is on the rise, especially with the Android devices … Craig also foresees the exploitation of personal data for financial gain or embarrassment. Electronic medical records, shared between clinics, hospitals and doctors and often stored on patients’ devices, are vulnerable.”

We’re always at risk. Be smart with your technology!

Including “Is It Possible To Catch A Cold From Being In The Cold?” “Why Do We Shiver When We Are Cold?” “Why Do I Produce All This Static In My Body And Hair in The Winter?” and more!

I hate it when my hair gets staticky in the Winter!!
Thor Photo of the Day: 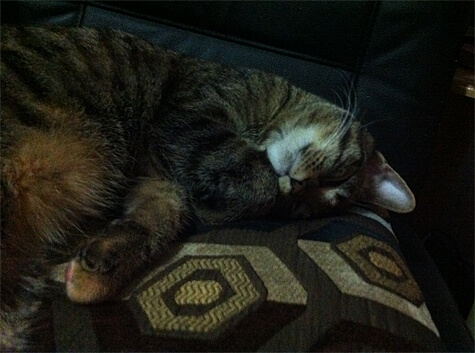 Linda Hoang is a Canadian blogger based in Edmonton, Alberta, who writes about travel, food lifestyle and pet topics. She's also a seasoned social media/digital strategist with a journalism background. Linda loves exploring the world with her husband Mike, eating their way through cities, supporting local businesses, and photographing Instagrammable Walls. She is the founder of the Edmonton International Cat Festival and a fur-mom to two cats and two dogs.
PrevPreviousClicks of the Day: Wednesday, December 7, 2011 Edition!
NextRecap: Volunteering for Santa’s Anonymous!Next