“For generations 12,000 people living in Medellin’s tough Comuna 13 – which clings to a hillside – have had to made the arduous journey up hundreds of large steps, which is the equivalent to climbing up a 28-storey building.
But now a giant outdoor escalator will cut their journey from 35-minutes to just six, and grateful residents have said ‘it is a dream come true’.”

Wow! That’s great for them. And such a contrast in the images – slick escalator against backdrop of poor, crowded little town.

“There is no question that the number of new users signing up for Google+ each day has accelerated markedly in the past several weeks.”

But just how active are the users…

“The Canadian Taxpayers Federation says premium hikes for employment insurance and the Canada Pension Plan will collect an additional $306 per employee from workers and their employers in 2012.”

“Some tips to consider to avoid being scammed include being aware that fraudulent charities use names that are similar to well-known and respected charities; write cheques directly to the charity and not to an individual; make sure online payments are secure; and refuse if there is pressure to give immediately.”

Let’s all do our best to not be scammed this holiday season (and ever)!

“The Metropolis festival opens in Churchill Square on New Year’s Eve and runs through February. It will also host a different art, fashion and cultural display every weekend.”

Looking forward to it! :)

Lol, hilarious! It was bound to happen!

“Bad science papers can have lasting effects… Each year hundreds of peer-reviewed scientific articles are retracted. Most involve no blatant malfeasance; the authors themselves often detect errors and retract the paper. Some retractions, however, as documented on the blog Retraction Watch, entail plagiarism, false authorship or cooked data.”

“Potato chips are one of several fatty foods that may cause brain shrinkage over time, a new study suggests.”

OH NO. MY FAVOURITE FATTY FOOD OF ALL TIME.

“Flaws in a widely used wireless technology could allow hackers to gain remote control of phones and instruct them to send text messages or make calls, according to an expert on mobile phone security. They could use the vulnerability in the GSM technology — which is used by most telecom operators globally and by billions of people — to make calls or send texts to expensive, premium phone and messaging services in scams.”

Of course this was bound to happen.

“Cellphone, heal thyself — if you’re sick of having to work your way through a series of broken electronic devices, dulled (or dead) batteries and an endless thread of replacement cellphones, help may be at hand thanks to scientists at the University of Illinois, who are hard at work creating ‘self-healing electronic circuits.'”

That would be wonderful. I’d also like one that can pop-out it’s own stuck hold button, lol.

“The jokes keep coming to mind about reports of a Japanese toilet manufacturer adding 72,000 pieces of Swarovski cut crystal to a prized pedestal, now valued at about $130,000.”

“Take it cat, take whatever you want, it’s all yours.” 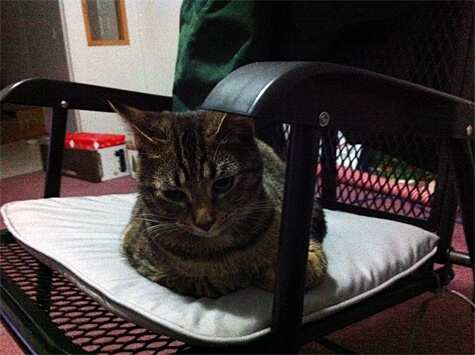 Linda Hoang is a Canadian blogger based in Edmonton, Alberta, who writes about travel, food, lifestyle and pet topics. She's also a seasoned social media/digital strategist with a journalism background, the founder of the Edmonton International Cat Festival and co-founder of Stop Race Based Hate, an online anti-racism education tool. Linda loves exploring the world with her partner Mike, eating their way through cities, supporting local businesses, and photographing Instagrammable Walls. Linda is a fur-mom to two cats and two dogs.
PrevPreviousClicks of the Day: Tuesday, December 27, 2011 Edition!
NextClicks of the Day: Thursday, December 29, 2011 Edition!Next